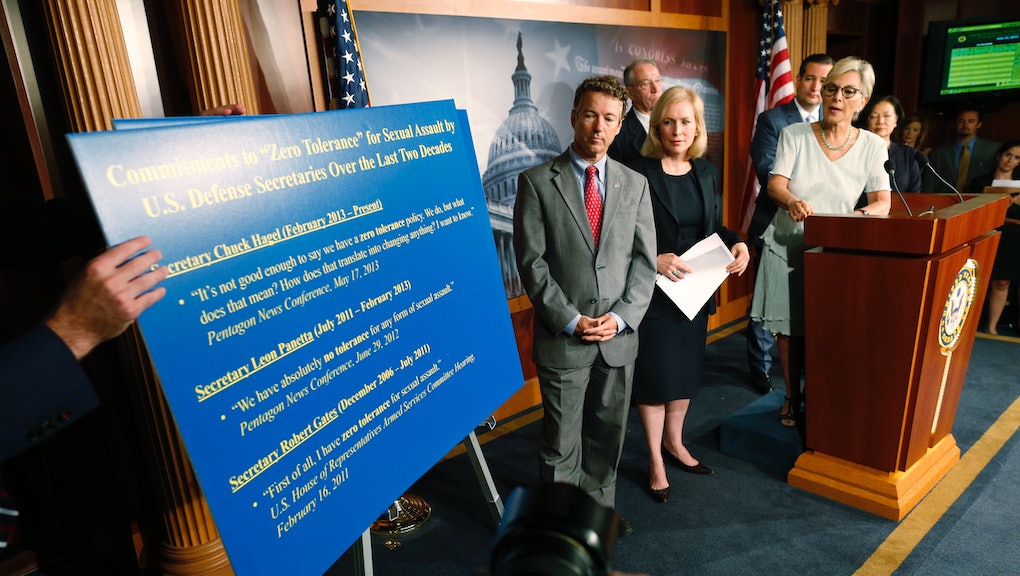 Military Sexual Assault is a Growing Problem, But We're Not Doing Anything About It

A jury decided to acquit the former head of the Air Force Sexual Assault Prevention and Response Office after a woman accused him of grabbing her buttocks. After two days of testimony in Arlington County Circuit Court last week, the jury dismissed misdemeanor and assault charges after about an hour of deliberation. Stars and Stripes reported that the defendant, Lieutenant Colonel Jeffrey Krusinski, could still face military discipline considering the case "came on the heels of a series of scandals that led critics to charge the military was not adequately addressing a growing problem of sexual assault in the ranks."

The issue of sexual assault in the military definitely is a growing problem. As Miranda Petersen reported for PolicyMic back in June, sexual assault rose by 34% in 2012, while only 9.8% of cases were reported and only 0.9% of those cases resulted in convictions.

Sen. Kirsten Gillibrand (D-NY) has been trying to address this issue by pushing hard for her Military Justice Improvement Act as an amendment to the 2014 defense spending bill. Gillibrand believes she will get the 60 votes the bill needs to pass the Senate, although only 47 senators have shown public support for the measure.

In an op-ed she wrote for Huffington Post this May, Gillibrand explained that the bill would take the jurisdiction over serious crimes outside of the victim’s chain of command and given to a trained military prosecutor. "Only when there is real accountability in the military justice system will more survivors of these crimes have the confidence to report them, and only then will these survivors get the justice they deserve," she wrote.

Petersen, who is also a policy adviser at Protect Our Defenders, a human rights organization that works with victims of rape and sexual assault in the military, told PolicyMic that these crimes have "absolutely devastating" consequences. "These are your brothers-and-sisters in arms — you have been trained to trust these people with your life. When a sexual assault occurs it is the ultimate betrayal of that trust and that bond, and it compounds the trauma associated with the assault," she added.

While the problem is clear, the solution has roadblocks. According to Petersen, the justice system is fundamentally flawed and biased towards the often higher-ranking, more valued perpetrators. "Sixty-two percent of the women who dared to report their rapes and assaults in 2012 report that they were retaliated against," she said. "This is due to the fact that commanders, not legally trained prosecutors, have the authority to decide whether a case goes to trial."

This fear of retaliation is why less than 10% of these crimes are reported, according to the Department of Defense Sexual Assault Prevention and Response Office, the same office formerly run by Lieutenant Colonel Krusinski. "That is why it is so crucial to take the prosecution decision away from commanders and give it to impartial, objective professionals. Until this change is made, the military justice system will continue to fail," Petersen said.

The Senate is scheduled to have a procedural vote on Monday evening to begin debate on the annual defense bill, although it is not clear if and when senators will discuss Gillibrand’s proposal. New York Daily News reported on Saturday that consideration of the bill is likely to be postponed until after Congress’ weeklong Thanksgiving break, which could be detrimental for Gillibrand’s cause.

Do we really want to continue sending the message to our serving men and women that their concerns and traumatic experiences don’t matter?

Since our veterans choose to fight for our rights, we should do the same for them.