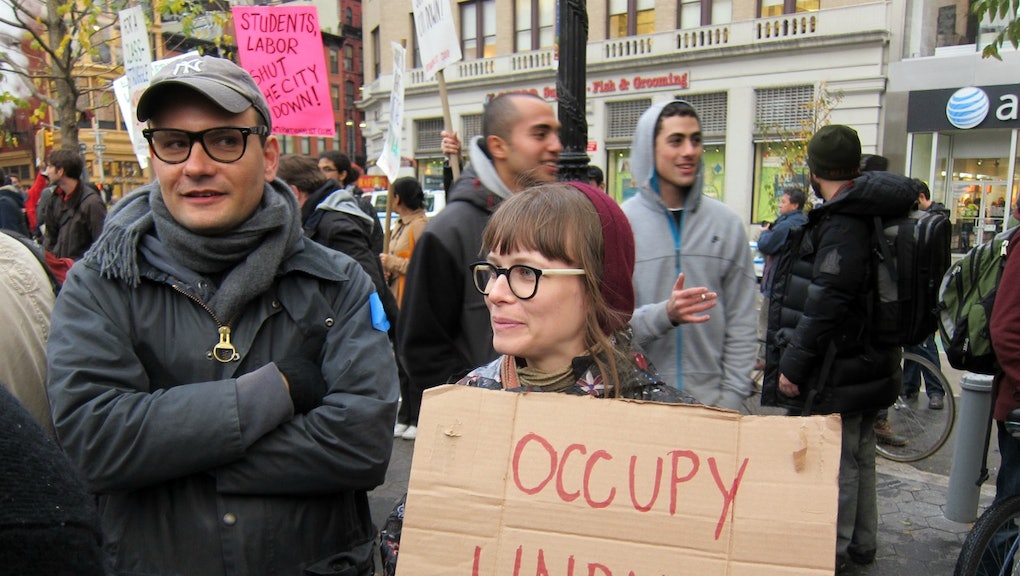 For far too long, millennials have been criticized as the lazy, entitled, do-nothing generation. It is certainly no secret that we have immersed ourselves in a wealth of technology and insta-everything. Yet we cannot forget that we are coming of age in an economy that is still trying to climb up from the worst recession in 75 years. College tuition is steadily increasing and total student debt now tops $1 trillion. Young people's dilemmas don't end when they graduate, either: As the first step in our working lives, we are often encouraged to apply for one of the estimated 1.5 million internships, largely unpaid, that are offered in the U.S. every year.

A number of legal battles over unpaid internships have made the news in the last two years, but generally speaking, college students and post-graduates alike seem uncomfortable with the idea of fighting back. The job market is shaky, and higher-education institutions are perpetuating the idea that unpaid internships are the new normal. But a failure to demand fair treatment now will have devastating effects on our mobility in the job market for years to come. Young people must push back against the culture of unpaid internships, and we can do this by holding our educational institutions and employers accountable for fair labor practices.

Three years ago, I might have chuckled at the thought of internships being a labor issue. After graduating college in 2010, with hard-won savings from my college jobs, I joined the realm of unpaid interns, feeling that it was the next logical step towards professional success. In one particular internship, though, I found myself sitting in the musty living room of the founder and artistic director of a non-profit theater company, with anywhere between eight and 12 young women (the numbers varied due to high turnover). We mostly spent each week asking small-business owners to donate to the theater company's silent auction. We may have been interns at a theater company, but promises of assisting festival rehearsals were overshadowed by the pressure to fundraise from 9 to 5, Monday through Friday. Asking for a day off was laughable. It was a full-time job, but without the pay.

Certainly, my fellow interns and I recognized our unfair and unusual situation. We also realized that there is a risk associated with going into any career in the arts, and that we had the option to leave. But even knowing this, I still felt it was crucial to inform the organization that I felt I had been deceived. I wrote a resignation letter, and when I approached the artistic director to tell her why I was leaving, she responded derisively, “What did you expect? To work in a theater?”

“Well your organization is…disorganized!” I blurted back.

It was my last conversation with her. I spent the subsequent year exhaustively searching for intern advocacy groups in the U.S., but to no avail. I even tried to start a website, but my enrollment in grad school — where I took on mandatory internships at nonprofits compensated by measly work-study funding — redirected my attention. I finally found a collective space in November 2011. In Spring 2012, we became Intern Labor Rights (ILR).

Since our inception, ILR has facilitated direct actions, written job board letters, supported an NYU petition, and created a survey on unpaid internships, among many other actions. We have also hosted intern happy hours and virtual summits with global intern groups, as well as a recent panel. Over time, we have found a greater interest our work, and can feel the movement to provide fair pay to interns growing.

My decision to organize was not an easy one, but I chose this path for a number of reasons. First, I felt I had been cheated out of the opportunity to pursue the best work opportunities available to me, simply because I (like many others) could not always afford to work for free. Second, despite the fact that Department of Labor’s Factsheet #71 sets out rules for what constitutes pay for interns, these rules largely exclude the nonprofit and government sectors. Finally, a survey by the National Association of Colleges and Employers shows that 37% of all unpaid interns received a job offer, compared to 35.2% of non-interns who received one — an increase of less than 2%. The assumption that an unpaid internship is crucial for career success down the road is quite simply false.

And as for the small group of (mostly) independently wealthy people who are able to work as unpaid interns, we must question how this will affect the integrity of organizations that will end up being run by a privileged few. There are significant racial, class, and gender implications to how unpaid internships work. If an organization hires a largely wealthy, homogeneous group of interns, this will surely be reflected in that organization's policies and management structure down the road.

Finally, while asking people to work for free is the most glaring failure of unpaid internship culture, far too many young people are also given internships under the false pretense that they’ll be getting educational or professional training, or decent workplace protections — and are then powerless when they discover they’ve been had.

So, what can you do about this? If you are currently a student or intern post-graduation, start by holding casual, collective meetings at a local community space. Come to consensus on how you envision fair internships, review Factsheet #71, and compare it to the state of your current or former internships. Try to gather data, and if you're a student, hold your school accountable (remember, you are their biggest customer) — you may be eligible for backpay. More of these tactics can be reviewed at ILR's “What You Can Do” page.

Our elders have trained us to believe that advocating for fair labor rights somehow makes us entitled or unwilling to do hard work. Nothing could be further from the truth. In a capitalist system that values labor by the dollar, we must make it clear to employers that dollars, not "experience" or "exposure," will pay our mounting bills.

The choice is ours: Will we become complacent with a system that is avoiding liability by replacing full-time, entry-level positions with precarious labor such as internships? Or, will we take an active role in recognizing that internships are the labor issue of our generation, and that our collective growth depends on financial stability and fair wages?

I’m rooting for the latter.