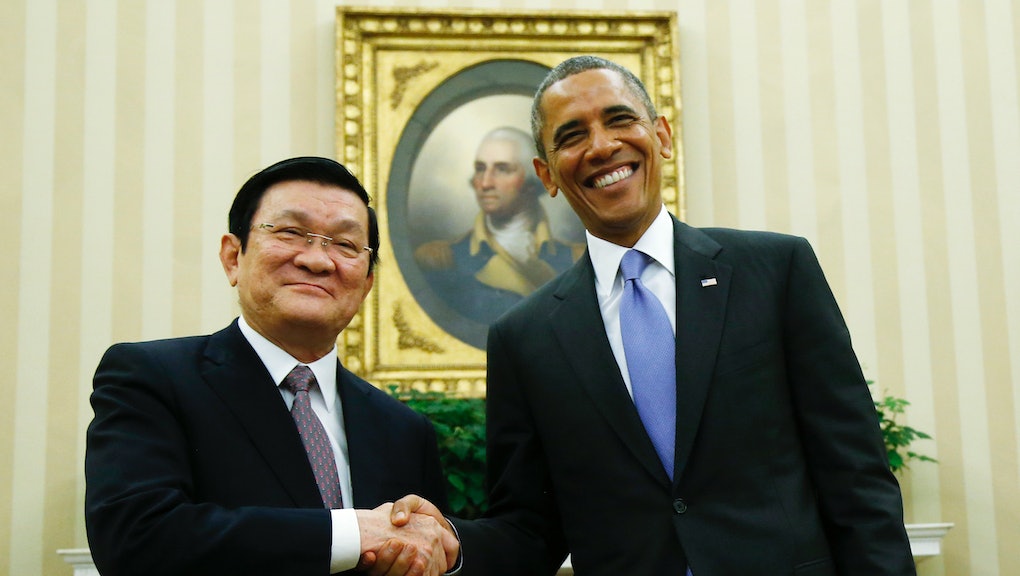 The TPP is Screwing You Over

The Trans-Pacific Partnership (TPP) — even just the name sounds moderate and welcoming.

Under this international trade agreement that the Obama administration hopes to sign by the end of the year, the U.S. will be able to reach across borders to partner with our friends in Asia, Australia, and Latin America. According to the New York Times, the TPP will "lower duties and trade barriers on most products and services, strengthen labor and environmental protections, limit the ability of governments to tilt the playing field in favor of state-owned firms and balance the interests of consumers and creators of intellectual property. Such a deal will not only help individual countries but set an example for global trade talks."

Wow. That sounds pretty great. We can lower "barriers" (bad obstacles to trade) and increase "protections" (good obstacles to trade). And look at all of that balance! We'll balance government interests, private interests, and the desires of consumers with the needs of producers. This agreement certainly sounds reasonable and moderate.

Who could oppose such a well-credentialed, bipartisan group?

If you want to see how corporations and government work together to screw their citizenry, this is how they do it — with talk of balance, moderation, and partnership. Only the American citizen is not one of the partners.

Despite the language to the contrary, the TPP deals far less with free trade and far more with protecting favored industries and extending this cronyism around the world. Only five of the 11 Pacific-rim nations participating in the TPP talks do not already have a free trade agreement with the U.S. and only five of the 29 chapters in the agreement actually deals with trade.

The other 24 chapters are a collection of cronyism and protectionism meant specifically to protect special interests.

Why do record companies support the agreement? A full draft of the chapter on copyrights leaked by WikiLeaks shows that the TPP would extend copyright protections for 100 years after the death of the artist. Under these rules, the classic chart-topper "Carry Me Back Old Virginny" would have just entered the public domain, but we'd still have to pay royalties for ragtime hits like "Weeping Willow" and "Swipesy."

Not only that, but patent holders would be able to sue hosting sites for patent infringement across countries — that is, if someone violates a copyright by posting on another's website, the site's owner is legally responsible. The limitations on freedom of speech of such a measure would be immediately felt across the internet.

Similar carve-outs and cronyism exist for all industries. Big Tobacco would be able to sue governments for damages from cigarette regulation, pharmaceutical companies would get copyright protections that would enhance their pocketbooks but hinder free trade of lifesaving medicines. It would be illegal to tamper with your own iPhone.

International trade agreements should not be about making sure one nation's regulations and protectionist policies are adopted by other countries. They should break down those policies in order to maximize trade with our allies. Because when we trade freely, we prosper. This agreement, sadly, demonstrates who the Obama administration really wants to prosper — and it is not us.