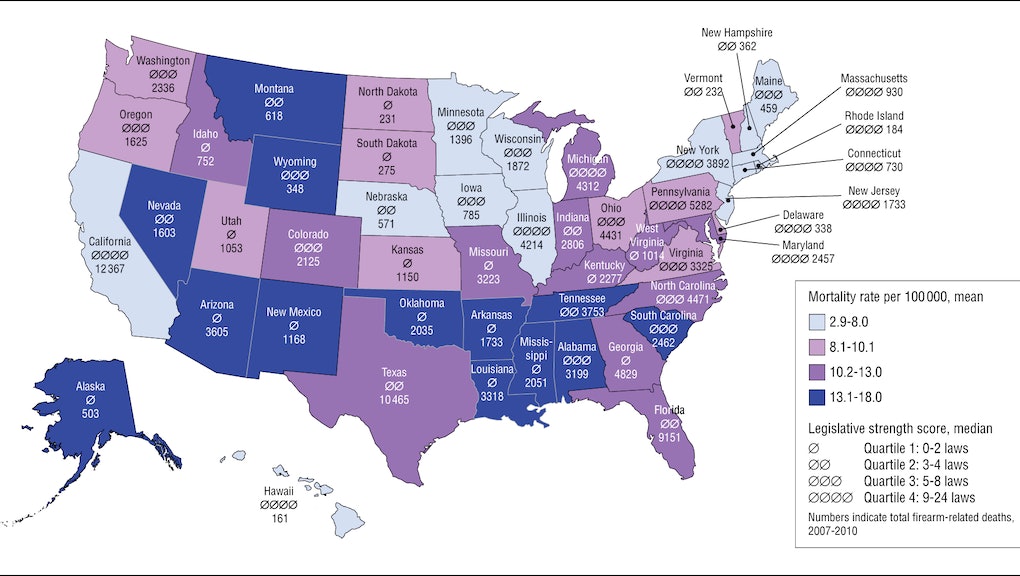 These Maps Debunk Everything the NRA Has Told Us About Guns

Yes, people kill people. But guns make a huge difference in how many people get killed.

Like any dangerous product — cars, airplanes, explosives — sensible regulation of guns clearly plays a positive role in reducing both misuse of this product and the number of deaths resulting from such misuse.

The map itself was part of a scholarly study by researchers from Boston Children's Hospital and published this March in JAMA Internal Medicine.

The map is not without exceptions and outliers, but the general trend is clear: States with more gun regulations had lower rates of gun deaths, and states with less gun laws had higher gun death rates, both in terms of suicide and homicide. That's certainly not the message we get from the National Rifle Association.

In the related study, the strength of gun laws was rated on a scale of 0 to 28.

Scores ranged from 0 (Utah) to 24 (Massachusetts):

Direct causation could not be determined, but at the very least, such a strong correlation should make it clear that existing public policy in many states with lax gun laws comes at a high price: more dead mothers, fathers, sons, daughters, brothers, sisters and others.

Now, if you're going to say, "Well, that's just ONE study!" To that, I will retort that the Center for American Progress released another study in April that pretty much said the same thing, and that showed that 10 states with the weakest gun laws had over twice the rate of gun violence as the 10 states with the strongest gun laws. Also, in 2011, a writer for The Atlantic found, with the help of a colleague, that the presence of gun laws in states had a strong correlation with less gun violence, as the chart and map below also illustrate.

Some final food for thought: Building on an earlier Harvard study, a brand new study published in the American Journal of Epidemiology showed that the greatest factor that determines gun suicide rates by state was not mental health issues, but rather gun ownership. And when it comes to gun ownership rates, well, the U.S. is No. 1 by far.

Leaving the gun laws as they are in states with the highest gun death rates is akin to pulling the trigger on thousands. Some states are better at this public policy issue than others, and it's time for the laggards to learn from the high performers.

If you think I'm wrong, the burden of proof is on you to provide counter-evidence. Not just ideology.