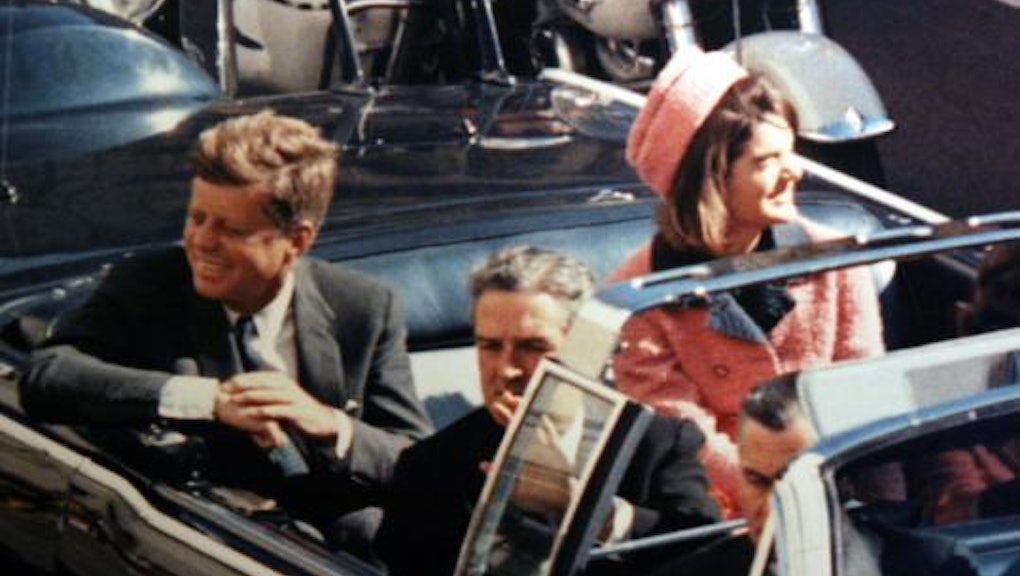 Friday marks the 50th anniversary of the assassination of John F. Kennedy. The memory of that day has been permanently seared into the minds of baby boomers, just as the memory of the terrorist attacks of Sept. 11, 2001 will live on for my generation. The assassination and its aftermath had a profound impact both culturally and politically that changed America forever.

Since the days of The New England Courant, newspapers had been Americans' primary source of news for over 200 years. That all changed upon Kennedy's assassination, which was the longest uninterrupted news event in TV history until the 9/11 attacks. America tuned in to watch Walter Cronkite report on the developments of the president's assassination as it was breaking, the hunt for the killer afterwards, and the shooting of Lee Harvey Oswald at the gun of Jack Ruby on live TV.

Fifty years later, this is a trend that remains in effect. According to Gallup, the majority of Americans (55%) still use TV as their primary news source, followed by the internet (21%); print is at a distant third (9%) and radio comes in last (6%).

2. Dawn of the Conspiracies Era

I'm not going to bother detailing every conspiracy theory out there, but suffice it to say that along with such a tragic event came every paranoid speculation of a bigger conspiracy afoot, because so many people simply couldn't accept the simplicity of the assassination. The hysteria of it all has truly been astounding, culminating into the biggest crock of B.S. I've ever witnessed in my life: Oliver Stone's JFK. I find that any given conspiracy theory tends to stem from political biases, hence the reason most radical leftists believe it was the doing of the military industrial complex and/or the CIA (whom they also blame for Robert Kennedy's assassination), why most right-wing extremists believe it was the Commies, and why most Joe Schmoes assume it must've been the mob.

I've read enough research and seen enough documentation to be convinced beyond a shadow of a doubt that Oswald was indeed the sole assassin. I'm also convinced that a significant portion of the American public will always resort to conspiracies any time a major event involving politics and death occurs, hence the 9/11 "truther" movement. If John Hinckley Jr. had successfully killed President Ronald Reagan in 1981, I can only imagine all the conspiracy theories that would've arisen. But since Reagan survived, everyone just accepted the fact that Hinckley was a lone nut, and never gave it a second thought.

But according to Gallup, six out of 10 Americans still believe in some Kennedy assassination conspiracy theory today. And that's at a 50-year low.

3. A Permanent Distrust in Federal Government

I've heard several progressives claim that the saddest outcome of the Kennedy assassination and the investigation (or lack thereof) produced a permanent distrust and shattered the American people's confidence in their own federal government. That's an interesting observation.

The Warren Commission that was put together and tasked with investigating the assassination certainly has an endless list of critics ever since its final report came out. What I don't understand is what its critics expected the commission to find. I think it was pretty clear from the start that this "big official commission" was meant to be more of a show for the media than anything else. I say that not as a conspiracist — at all — but as a realist that understands that 1) Why anyone would put their full faith in any bureaucrat-appointed government entity to conduct an efficient and thorough job of anything baffles anyone who's familiar with public sector efficiency and history, 2) The commission didn't discover anything that countless other documentarians, eye witnesses, or historians since didn't already uncover, and 3) If a conspiracist wants to hear a conclusion that involves a conspiracy, what do you expect their reaction will be to any conclusion that doesn't involve one?

But that has changed a great deal since. Today, progressives trust government more than anyone and indeed display immense confidence in its capability to run anything. Libertarians and some conservatives naturally have a distrust in government, but I think that stems from ideological skepticism more than anything else. So while the Kennedy assassination aftermath and the Warren Commission produced a major cultural distrust in federal government amongst most Americans from about 1965 to 2005, that "distrust" now seems to depend on which party is sitting in the White House more than anything else. To illustrate, a Pew Research survey showed that in 2006, 61% of Democrats found the NSA's domestic surveillance programs to be "unacceptable" when George W. Bush was president. Today, under Barack Obama's presidency, 64% of Democrats now find it "acceptable."

Many loyalists claim that had Kennedy not been assassinated in '63, the escalation of an American military presence in the Vietnam War would not have occurred. While it's hard to prove, they're probably right.

No doubt Kennedy wanted success in foreign policy to be the crown jewel of his legacy, but his presidency got off to a very rough start in that realm. After the embarrassment of the failed Bay of Pigs invasion, a summit with Soviet Premier Nikita Khrushchev in Vienna in which Kennedy was criticized for looking like an amateur, and the erection of the Berlin Wall all occurring within the first year of his administration, Kennedy feared that he appeared weak on the international stage. It wasn't until the events of the Cuban missile crisis in October of '62 when Kennedy finally started getting some respect on foreign policy matters. But his administration was also seeking a desperate victory against communist forces elsewhere in the world, including Vietnam, which they had been closely following from the beginning.

U.S. involvement escalated in the early 1960s, with troop levels tripling in 1961 and again in 1962 (from 900 to 16,000 advisers). By 1963, Kennedy and his cabinet were fully aware of the deteriorating popularity of the South Vietnamese regime led by Ngo Dinh Diem. Declassified documents from Aug. 24 through Oct. 29 of that year show the intricate discussions Kennedy had with the CIA and military officials about orchestrating a coup d'etat to replace Diem. By the time the coup was carried out on Nov. 1, Kennedy had withdrawn all support from Diem and had aided South Vietnamese military officials with CIA support and money to successfully overthrow him — though Kennedy seemed surprised that the coup resulted in Diem's and his brother's deaths.

Kennedy fully understood the responsibility of Saigon that fell into his lap after the coup. But would he have committed more troops as the war escalated? What makes it hard to believe he would is that it's exactly what he didn't do in Cuba. While the CIA and military advisers pressed Kennedy to commit air support to aid the Cuban exiles during Bay of Pigs, Kennedy resisted because he wanted the operation to look like Cubans fighting Cubans, not Cubans fighting Americans. Even during the Cuban missile crisis, Kennedy resisted more calls to invade with boots on the ground. Similarly, he made it known that he wanted the Vietnam War to remain (in the public eye, anyway) as Vietnamese fighting Vietnamese. Although Kennedy was feeling pressure to not look soft on fighting Communists, it's at least believable that he would've cut his losses in Vietnam (but I concede that this is purely speculative). In any case, Lyndon B. Johnson ended up making the call — along with the rest of Kennedy's original cabinet — to go all in by 1965 after comfortably winning the election in 1964, which brings me to my final point…

Although the assassination and its aftermath embedded a permanent distrust of federal government into the social fabric of America for decades to come, the immediate results in Washington arguably produced one of the most progressive eras of legislation in U.S. history next to the 1910s and 1930s.

Although the focus of the Kennedy administration was on foreign policy, it had an ambitious domestic agenda which Kennedy nicknamed "The New Frontier." The agenda included some of the biggest expansions of the welfare state since Franklin D. Roosevelt's "New Deal," from reintroducing the food stamp program to increasing Social Security benefits by 20% to incentivize early retirement. Yet there were several other proposals from his agenda that were being stalled in Congress, including civil rights legislation, guaranteed health care for the elderly and poor in the forms of Medicare and Medicaid, and income and corporate tax cuts. (That's right, Kennedy believed in cutting taxes to stimulate economic growth — probably the last Democrat in history who believed so.)

I don't think there is any doubt that Kennedy was a better campaigner and more attractive candidate than Johnson, which is why he defeated Johnson for the Democratic nomination at the 1960 convention. Yet despite the voter enthusiasm behind Kennedy, he was barely able to defeat Vice President Richard Nixon in the 1960 presidential election: 49.7%-49.6%. With one of the slimmest margin of wins in electoral history, Kennedy knew that he could only rattle the cage ever so gently during his first term and was understandably waiting to pass his more ambitious proposals after he had been elected to a second term.

But the 1964 presidential election wasn't even close. Johnson — arguably the weaker of the two Democratic candidates — defeated Senator Barry Goldwater in a landslide: 61.1%-38.5%. While modern day presidents such as George W. Bush and Barack Obama like to think a 51% win gives them a mandate to comfortably do whatever they want, their approval ratings rapidly plummeted afterwards because they overestimated their popularity. But when a president wins with 61% of the popular vote, he can certainly assume he's got some room to comfortably do whatever he wants.

But more importantly, the 1964 Democratic landslide also gave the party an unprecedented two-thirds majority in both the House and Senate, which gave them the ability to pass anything and everything they wanted with lightning speed. With a two-thirds majority in both houses of Congress, as well as a president that had won over 60% of the popular vote, came the dawn of the Great Society and all the historic legislation that it produced.

While some may claim that the Democrats were able to defeat Goldwater so soundly in '64 because they were able to successfully portray him to mainstream Americans as a conservative extremist, it's hard to argue that their gains would have been so substantial that year had they not been driven by the momentum and sympathy stemming from the tragic assassination of the president. Republicans were put in the awkward position of speaking out against a killed president's agenda in an election year while Johnson could easily bank on a win in '64 that he arguably would've narrowly lost had he been the Democratic candidate in '60.