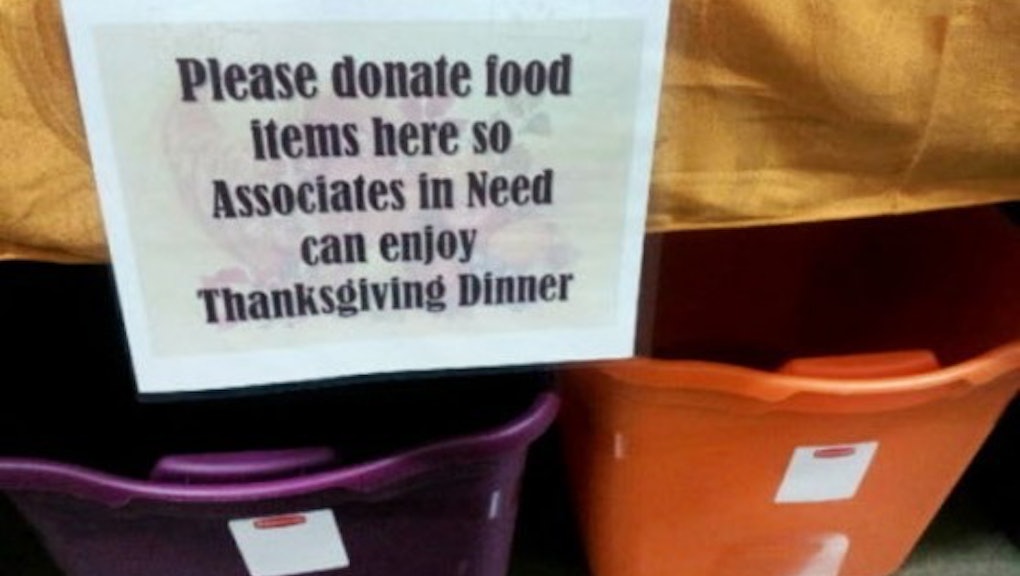 This Photo From Walmart Went Viral. Here's Why.

The news: A photo of collection bins at a Walmart in Canton, Ohio, went viral after it was revealed that the store was accepting donations of canned goods for its own employees. The image of the bins, which were located in an employees-only area and labeled with a sign saying, “Please Donate Food Items Here, so Associates in Need Can Enjoy Thanksgiving Dinner” was posted to the Facebook page of Walmart workers group Organization United for Respect at Walmart, and the enraging story was picked up by the Cleveland Plain Dealer and numerous online outlets.

The backstory: Given that it’s the world’s biggest private employer, Walmart is often seen as an exemplar of recent economic trends, whether it comes to positives, like the company’s low prices and the efficiency of its supply chain, or negatives, like its aggressive expansion, union busting, and low wages. (Coincidentally, today’s Cleveland Plain-Dealer also reported a National Labor Relations Board decision stating that, “Walmart unlawfully threatened employees with reprisal if they engaged in strikes and protests.”)

While retail analysts like Boulevard Strategies would argue Walmart’s low retail prices and one-stop convenience benefit the communities it enters, there is ample evidence that the company’s highly profitable business model is dependent on externalizing the social costs of the low wages it pays and part-time hours it offers. Walmart’s employees constitute a significant chunk of the individuals on Medicaid and dependent on food stamps in states across the country, leaving taxpayers with the burden of compensating for the company’s underpayment of workers.

Which is why the donation bins in question may seem like a particularly unfortunate form of charity, given that the sign is asking the broke employees of a highly profitable corporation to help out their fellow broke employees by buying from the company store. And because, dismally enough, the recipients apparently aren’t even earning enough to splurge on discount canned cranberry sauce.

The bigger picture in all of this: Although inflation is continuing apace and American workers are more productive than ever, wages have largely stagnated, as can be seen in this chart from the Economic Policy Institute:

A 2012 study by the Center for Economic Policy and Research found that if the federal minimum wage of $7.25 per hour had kept pace with inflation, it would be $10.52 per hour — and that if it had kept pace with productivity increases, it would currently be an astonishing $21.72 an hour. The Walmart photo comes amid a similar outcry against the underpayment of fast-food workers (who are also largely dependent on public assistance), and battles to increase the minimum wage across the country.

Until that happens, shoppers may want to keep the Walmart photo at the fore of their mind as they make decisions about what to buy, and where, this holiday season.