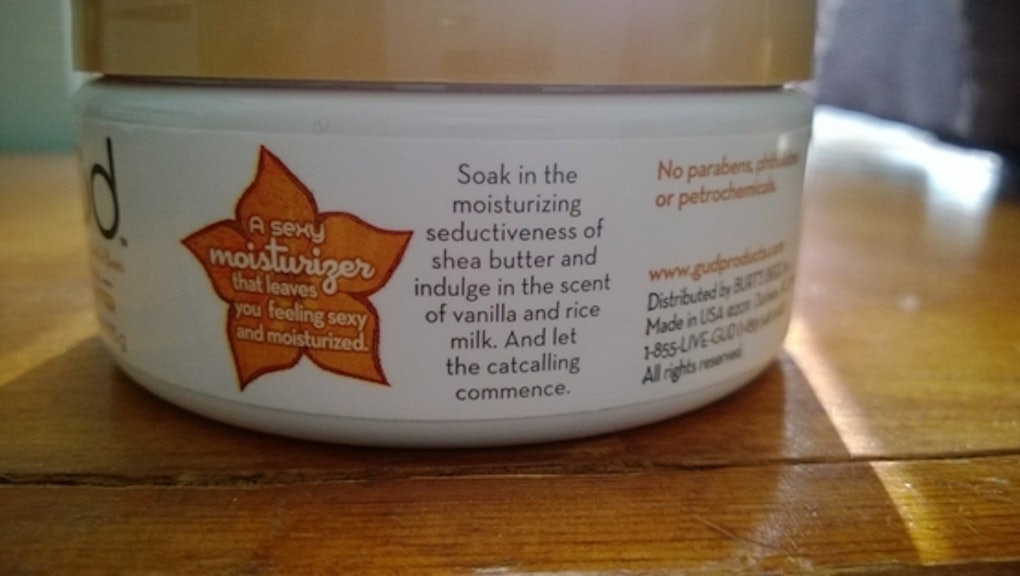 Last week, Burt's Bees released a new body lotion with the tagline "Soak in the moisturizing seductiveness of shea butter and indulge in the scent of vanilla and rice milk. And let the catcalling commence."

The inappropriate marketing caused a social media storm, prompting Hollaback, an anti-street harassment group, to launch a campaign asking Burt's Bees to issue an apology and cease production of the lotion marketed under its subsidiary Gud. Burt's Bees quickly issued a half-baked apology on its Facebook page, followed by a formal one indicating an end to the production of the offending body butter.

Surprisingly, at least to me, a number of female customers said people were being too politically correct and thought the fuss was all much ado about nothing.

"Rape and violence toward women has some scary statistics, but offering appreciation of the opposite sex in the form of a whistle or a wink is not a precursor of violence," wrote Kellie Mitchell West on one of the series of Facebook threads on the product's page, where a series of heated arguments over the tagline have been taking place since last week. A number of the "get over yourselves" folks in the thread cried hypocrisy over the outrage, citing the unabashed popularity of brands like Victoria's Secret, American Apparel, and Axe, who use arguably similar marketing techniques.

Take, for instance, this Axe commerical:

Apart from the fact that the ad campaigns of these brands have been heavily criticized, what sets them apart from Burt's Bees is that their very existence is based on cheap and gimmicky means of selling sex. In contrast, sexualizing a Burt's Bees product is unusual, even startling, for an otherwise hippie, organic brand known for its beeswax lip balm.

Some of my earliest memories growing up in New Delhi, India included my aunt, who lives in Los Angeles, bringing back the battery-sized yellow lip balms, and the hand salves bearing the gentle-looking face of a bearded farmer. Of course, marketing could care less about my childhood memories in their quest for a seemingly "adult" modification to their brand.

What is perhaps most galling about the whole Burt's Bees argument is that many commenters echoed the tagline of the product itself, reducing the violence of catcalling to a matter of women being ungrateful for receiving compliments. As Katie Bailey wrote in the Facebook thread, "Girls you all know if some hottie whistled at you on the street you'd feel pretty good about yourself. Some people need to get a life and stop reading into things way too much."

If only catcalling was, in fact, restricted to some errant whistles; if only we reveled in the form of communications practiced by dogs and wolves. Instead, catcalling is often a precursor to violence, whether it's a 14-year-old girl who was run over repeatedly by a man whom she refused to have sex with for $200 or whether the runner in Washington who experienced a similar ordeal when she refused to hop into the assailant's car. What Bailey and others fail to understand is that catcalling is often an attack on and negation of a number of intersecting identities that make us the individuals we are.

As a gay, Indian man, I've faced harassment myself on multiple occasions, in New York City.

About a year ago, my boyfriend at the time and I made several trips to Hell's Kitchen. On a number of occasions when we were walking and holding hands, we received glares, and random angry mutterings from lone middle-aged white men. I never caught exactly what they said, but hearing their tone made me conscious of my identity as an Indian and gay person. Seeing as we happened to be in one of the gay-friendliest neighborhoods in the city, their disapproval made me wonder whether they were talking about us because we were a gay couple or because we were also a bi-racial one.

Last Halloween, I had a much clearer experience of street harassment.

I had dressed up as Anna Wintour: blond bob, impossibly large sunglasses, a dress cutout from a white bed-sheet, black pumps, and so on. Returning home just after 2 a.m., I was harassed in the matter of minutes it took to walk the couple blocks between 8th and 10th Ave.

A middle-aged man standing under the lone streetlight at one corner of 8th Ave. tried to grab me from behind, managing only to pull at my dress.

When I crossed the street to escape him, two men walking in the opposite direction looked toward me, calling "Hey sexy", "Hey baby."

I quickly picked up my pace and took a turn on 10th Ave. to make my way to my building on 37th St. From up ahead, I could see three men approaching. I was nervous and tried to dash across the street to the other side, but there were cars speeding in both directions. It was too late. They had surrounded me. More of the "Baby, let me take you home," language followed. I pushed past the guy in the middle and bolted home.

As soon as I was in the door, relieved but visibly out of breath, I told my roommate, "I finally know what it feels like to be a woman on the street."

She smiled concernedly and said, "This is only one instance. These sorts of things happen to me and my friends every day."

I didn't know that. And she wasn't the only one of my female friends who had chosen to keep quiet on the subject of street harassment. As my friend Kate Perino told me over the phone, "I just don't like to make a big deal about it. There's just no point. If I got upset every time something like this happened I just wouldn't be able to live my life anymore."

In interviewing some of my closest female friends for this piece, I came to realize that every single one of them had withheld stories of harassment they had experienced on the street. In contrast, I had been so quick to talk about my own. I naively and foolishly compared it to their experiences without realizing just how much the very incidents of catcalling they described had shamed them into keeping quiet.

My female friends told me that catcalling was an assault on multiple aspects of their identities, not just their gender. My roommate, who is also Indian, told me that she is often mistaken for Hispanic, and thus harassed in Spanish. Being greeted with the words "Konnichiwa," "What kind of Asian are you?" are just some forms of catcalling that ridiculed the Asian-American identities of my friends Jennifer Arellano and Melody Lee respectively.

"I think of myself as a strong woman," said Lee. "But comments like that leave you totally derailed and weakened. You feel de-humanized and totally violated."

I had thought that my experience at Halloween allowed me to understand what harassment is like for women, but talking to others about it made me question whether I had been viewed that night as a woman or a man dressed as a woman. Increasingly I began to believe the latter, a realization which was equally troubling.

"You can't win against people that get so angry and caught up in things. Maybe we should learn to forgive wrongs instead of getting so angry?" wrote Ruth Sager Schooley on the same Facebook thread over the Burt's Bee's lotion.

Should we forgive the group of men who hurled homophobic slurs towards 21-year-old Islan Nettles, and then senselessly beat her to death because she was a transgender woman?

Should we just "get over ourselves" and forgive the man who shot Mark Carson at point blank range in West Village, after hurling slurs at him for wearing a tank top and cut off shorts?

And that doesn't even cover the over 68 reported incidents of unprovoked hate crimes against LGBT individuals, just in New York City, this year so far, up from 54 last year. They all usually started with a few words uttered by the male assailants but ended with the victims being brutally beaten and in some cases killed.

While incidents of gay hate crimes might make me look over my shoulder twice, I can't even begin to imagine what my female friends go through each day.

As my friend Lauren Hudson pointed out to me, after the Halloween incident was over, I could go home and take off my wig, and hang up my dress, and never have to see it again. Yes, the fact that I'm gay and Indian remains, but those identities aren't always as obvious or visible. But for Lauren and my other female friends, the attacks on their intersecting identities continue unabated.