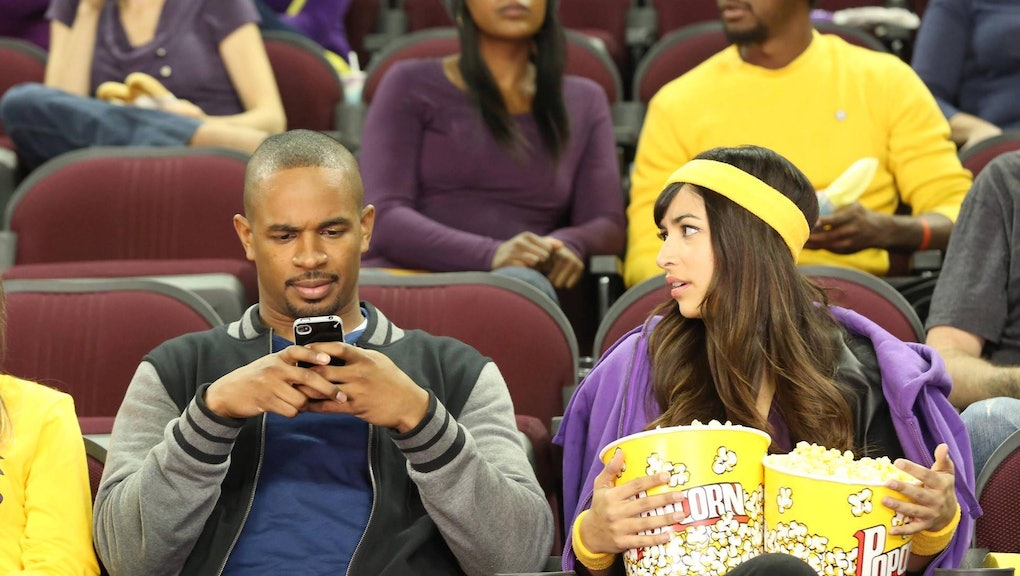 Tonight's New Girl mixed up some of the typical pairings a bit, and it was nice to be reminded of how good the chemistry is among different members of the cast.

In the cold open, Nick and Jess are trying to plan a date night, but are interrupted. First, Winston comes in asking one of the them to cat-sit so he can go out and meet "human women." As Winnie has revealed that he showers with Ferguson (I'm not an animal person, but don't cats hate water?), Nick is wholly supportive of this notion … until he learns that the cat requires a "butt pill."

Fortunately, the topic of Ferguson's rectum is retired when Schmidt enters, bearing a peach cobbler and some bad news: Cece and Coach are going on a date (to be fair, Coach did follow Bro Code and asked Schmidt first).

"Coach is super hot," Jess pipes up, to her boyfriend and Cece's ex-boyfriend. Crickets. "Wrong crowd."

Uh, yeah, you think so, Day? It looks like date night is off.

Nick seems taken aback. "When we're very, very merry …," she recovers, quasi-gracefully. Nick is enough of a gentleman/horrified enough to let it go, and the topic doesn't come up for the rest of the night.

There are bigger fish to fry, namely keeping Schmidt from self-harming or from ruining Cece and Coach's date, which does not get off to a good start.

Coach arrives at Cece's door and compliments her with a series of hand gestures, including a thumbs-up and a finger gun point.

He takes her to … some sporting event where he buys lots of "merch" (that's merchandise, for those of you who can handle multiple syllables) and tosses dollar bills at the pretzel seller. I am convinced that Cece is either a complete class act or conducting a sociological experiment not to have walked out … and then he starts texting, and there she goes.

Coach follows her out and explains that he was texting with his mother, who's been encouraging him to keep from being too nervous about his date. Fresh off a breakup, Coach is feeling a little gun-shy. Cece gets this. And thus pop culture gives us another lesson in how behaving like a preening, peacock jackass will get you nowhere. Well done, pop culture. I actually mean that.

Meanwhile, Nick, Jess, and Schmidt are home when Winston comes in, bemoaning his lost ability to speak to women. He soon discovers that Nick left the window open and let Ferguson escape.

In the words of Hayley Mills movies, that darn cat.

So Nick and Winston run off to find Ferguson, while Jess stays behind and Schmidt-sits as the Jewish lothario obsesses over the Coach-Cece date like a girl Facebook stalking her ex. Jess tries to distract him by singing and reading to him from her yearbook.

And then Schmidt tries to make out with the couch because the leather reminds him of Cece. I'm calling for a vote. Which is more disturbing: making out with a couch or kittens trying to breastfeed off an adult human male?

Speaking of which, as Nick and Winston drive around looking for Ferguson, Nick tries to encourage Winston to go out more, going so far as to call his friend "pathetic." As Nick puts it, however, "what do friends do when their other friends are taking a shower with a cat?"

I don't know about you guys, but I hope I never have to answer that question.

And just as they're about to give up, Winston gets a text. Someone has found Ferguson … eating a dead raccoon's eyeball (yep, put down the Pop Tart). His savior ends up being the owner of an overgrown hamster. She offers the men bologna and pudding, and tells them of her days as a bus driver and her checkered past, including her tubal ligation.

"This is a real, honest conversation!" Nick sputters, incredulous. Winston thinks it's pretty hot. Hamster Lady has pudding … not in a cup. And bologna, of course. The kind in the plastic wrapper.

"You can suck on it to make it soft," she tells him, and we all know what we were thinking. Nick takes the cat home, because he's a good friend, and because he looks like if he stays any longer, he might projectile vomit.

While Winston is embarking on his new romance, Jess has brought Schmidt to the bar to introduce him to women. Her rambling intro needs some work. She might want to try this tactic.

After letting the pretty blonde down gently, Schmidt bolts to find Cece and Coach, and stops to get chocolate.

"Do you have something that says I'm sorry I cheated on you; please don't sleep with my friend?" Shockingly, she doesn't.

Jess chases Schmidt in the fire mobile she acquired in Mexico to tell him he has to let Cece go. Schmidt does the truly logical thing and tells her that there is only one way she can stop him: Hit him with her car.

She taps him, barely, cop shows up, she freaks and really hits him.

There's a point at which a normal person would have just let a person make an idiotic move like this and call the victim to let her know that her ex is on his way to bust up her date. That point comes before you hit anyone with a car.

Fortunately, Schmidt isn't badly hurt. They head home and almost have a nice moment, until they see Coach and Cece engaged in a pretty serious make-out session.

It's good to see them moving forward after a good amount of tension during the first part of the season.

Less good to see: Winston and Hamster Lady sharing some milk of magnesia and a hideously awkward make out session. Like, even more awkward than Schmidt and the sectional. Oh yeah.