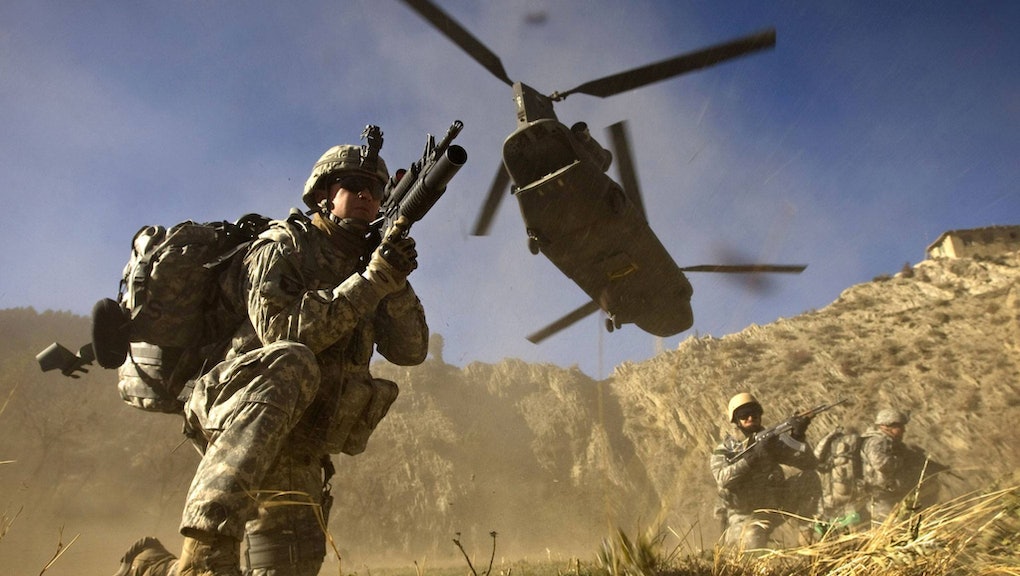 A New Security Deal May Keep America in Afghanistan Indefinitely

The news: Most Americans thought the war in Afghanistan was over — or close to it. But both U.S. and Afghan officials at the highest levels of leadership are close to finalizing an agreement which would keep American bases in Afghanistan open indefinitely, station 7-15,000 troops in said bases, lock the U.S. into continually funding the Afghan military, and allow American forces to conduct support and counter-terrorism missions in pursuit of both high and low-level targets linked to Al-Qaeda or other terrorist groups.

The agreement would set a baseline presence of at least a decade's length, with no timetable for complete U.S. withdrawal.

If signed, it would mean that the war in Afghanistan isn't ending, just being constantly renewed on a scaled-down basis.

The details: Here's the deal, known as the "Security and Defense Cooperation Agreement Between the United States of America and the Islamic Republic of Afghanistan," Afghanistan would allow the U.S. to operate military bases in its territory to train Afghan security forces and wage counter-terrorism operations against Al-Qaeda long after the supposed American withdrawal in 2014. But U.S. forces will have limited authority to conduct these operations, being stripped of the powers of arrest or entering Afghan homes.

However, U.S. officials purportedly won the debate on this issue over the weekend, after "serious consternation at the highest levels" of the White House that constraints on American use of force was "the one remaining thing that could ultimately kill the deal."

The deal would begin on Jan. 1, 2015 and remain active until "2024 and beyond." Afghans hope for 10-15,000 troops, while U.S. officials say they'd prefer 7-8,000 with a NATO supplemental force. Either situation would rapidly run a bill of billions. Americans will be present at many Afghan bases provided rent-free, including some reserved for their use, but will still pay for a large chunk of the Afghan defense budget, as well as very high amounts in logistics and other costs.

None of the individual parts of the agreement have been finalized, and a weak showing of support from the Afghan Loya Jirga (a consultative council of elders whose judgment President Hamid Karzai has pledged to respect) or the Obama administration could force the document into revision. But regardless of who balks, some form of this plan is likely to be implemented.

In 2011, the Obama administration outlined that this would be the trajectory of the draw-down:

The takeaway: President Obama has never committed to a full withdrawal of troops from Afghanistan, just a transition in "combat" to "support" missions beginning in 2014. As evidenced by the clear amount of time and energy the U.S. has invested in these talks, it's apparent that the Obama administration intends to leave a substantial American military presence in Afghanistan indefinitely. It is also clear that top U.S. officials have severe doubts that Afghan security forces can maintain rule of law, let alone fight Al-Qaeda, even after a decade of occupation and reconstruction.

While this is indeed a blueprint for scaling down a U.S. presence in the region, it's also a blueprint for solidifying a permanent force in Afghanistan that's integral to the long-term survival of the acting government.

So much for putting an end to the wars in the Middle East.