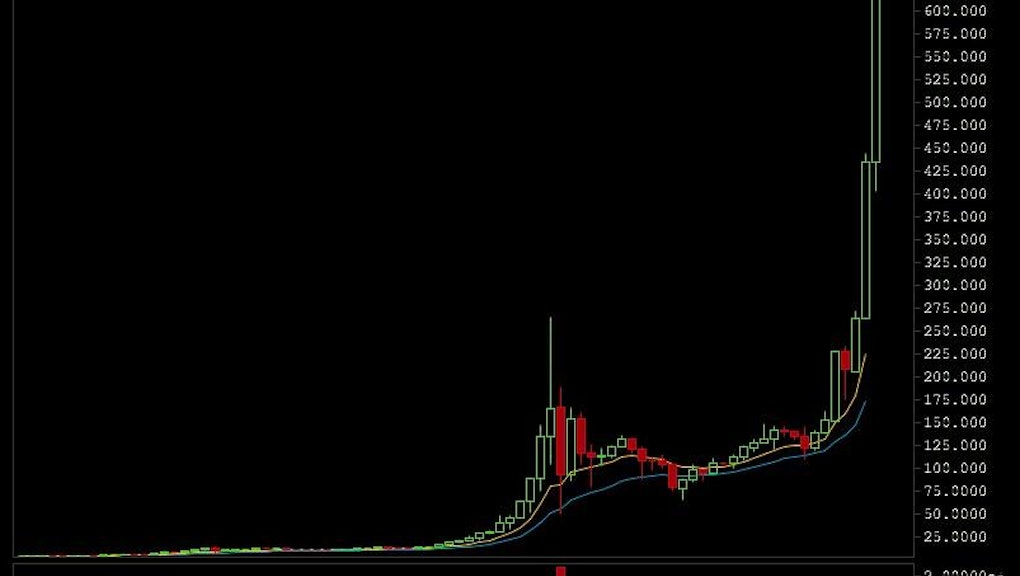 See Which Currency Has Absolutely Skyrocketed Over the Last Two Days

The news: Bitcoin, the digital currency that's been taking the world by storm, is reaching new all-time highs. Each bitcoin peaked at $675 in value on Monday.

See the price spike below, courtesy of Business Insider:

The surge in bitcoin's value was very likely fueled by comments made on Monday by Federal Reserve Chairman Ben Bernanke in a letter released to help guide the Senate in regulating digital currencies. Bernanke said that the Federal Reserve currently lacks the regulatory authority to effectively supervise digital money, but that technologies like bitcoin "may hold long-term promise, particularly if the innovations promote a faster, more secure, and more efficient payment system."

The explanation: Bitcoin is no stranger to virulent price fluctuations, crashing in value to less than $125 after spiking at $266 earlier in 2013.

But this volatility is a feature, not a bug; bitcoin was designed to work independently of the realities of normalized, government-and-economy-backed currencies. Market instability generates incredible returns for a relatively small-segment of the Bitcoin-holding community, especially long-term holders. Just in October, a man who bought $27 worth of bitcoin in 2009 found that they're now worth $886,00. And earlier this week, this post popped up on my Facebook feed:

In practice, though, while long-term holders of bitcoin have historically done extremely well, it's unclear how long the currency can actually keep up this rate of price inflation. Price spikes in bitcoin often spur irrational exuberance which results in a large-scale crash, leaving lots of people suckers. And the price is now so high that if there's a marker adjustment and bitcoin normalizes at $200-400, anyone who invests now could lose a lot of money. It's very unclear whether that will happen and even the best analysts have little predictive power, seeing as nothing quite like bitcoin has ever hit the market before. For all we really know, bitcoin could steadily increase, generating unimaginable yields over the next few years to decades.

Or, as FT Alphaville writer Izabella Kaminska suggests, bitcoin could actually be going through a huge crisis: With the shutdown of the illicit Silk Road website, there's been a huge shortage of bitcoin. There's also been a rash of bitcoin thefts and a computer virus which demands bitcoins. Finally, the "mining" process by which more bitcoins are created (solving mathematical equations) has been cracked by some geniuses somewhere or other, obliterating profit margins for hobbyists and other traditional miners.

And without any central banking authority to regulate or ease these pressures, this short squeeze could be headed towards a massive crash. While even the most dire of price drops is unlikely to kill bitcoin, it might encourage some holders to divest in favor of a more stable investment.

Should you invest?: Are you feeling lucky?