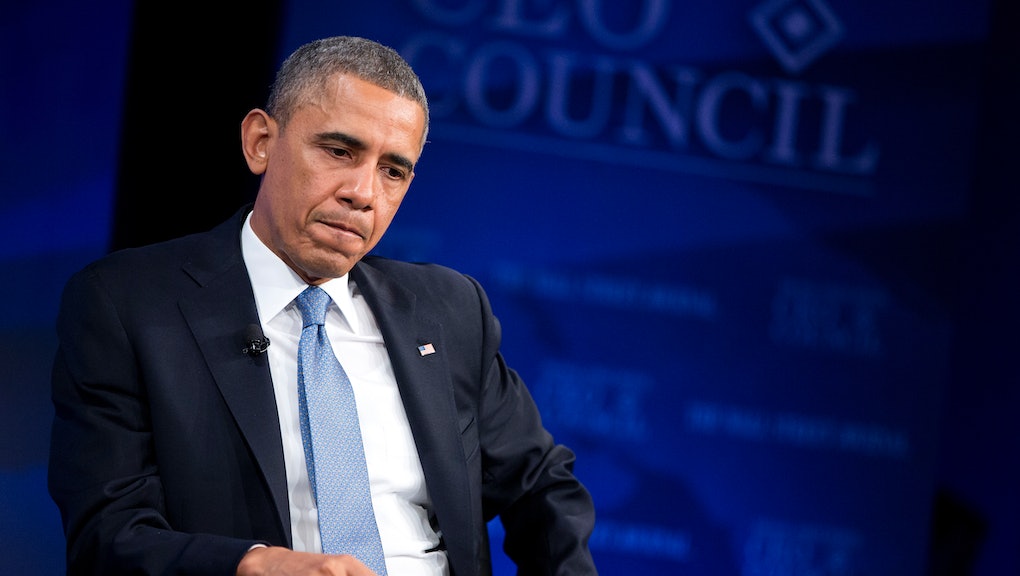 Look Just How Bad Obama is Doing, Compared to Past Presidents

The news: President Obama's job approval ratings have dropped to the lowest in his presidency. According to a new poll by CBS News, Obama's disapproval rating is now 57% — and his approval just 37%.

Compared to recent two-term presidents, Obama is doing worse than both Clinton and Reagan but slightly better than George W. Bush:

And Obamacare's approval rating has dropped precipitously as well after weeks of crippling technical problems with the Healthcare.gov website and millions of insurance plan cancellations. Just 31% approve of the Affordable Care Act, with 61% opposed, down from 43% approval in October.

How bad is the damage? Republicans are, predictably, pretty universally opposed to Obamacare — and the latest glitches with government healthcare exchanges have only raised their ire. Just 5% of Republicans polled by CNN support the law, with 88% disapproval in that party.

The real damage is in Democratic and independent voters. Over the past month, approval for Obamacare has dropped from 74% among Democrats to a mere 58%, a 16% fall. That's pretty precipitous. And independent voters have gone from 38% support to just 27%, with 67% now disapproving.

Sixty-seven percent of those polled agree that Obamacare signups are not going well, just 34% are confident that Healthcare.gov will be running smoothly by Dec. 1, and just 7% think the law doesn't need tweaking.

But what does this mean, really? Not as much as you'd think. For one, check out Congressional approval ratings:

People are discontent with government in general, not just the president. After a year filled with artificial crises like the debt ceiling fiasco, the government shutdown, and massive political flashpoints like the Benghazi scandal and allegations that the IRS improperly targeted Tea Party groups for tax compliance, it's understandable that Americans are sick of constant political showboating. This is a crisis of faith in government moreso than it is a crisis of faith in Obama himself.

However, expect more Democrats peeling off from the herd and attacking the White House on Obamacare, and expect the 2014 midterm elections to be tougher for anyone closely linked to the president's agenda.