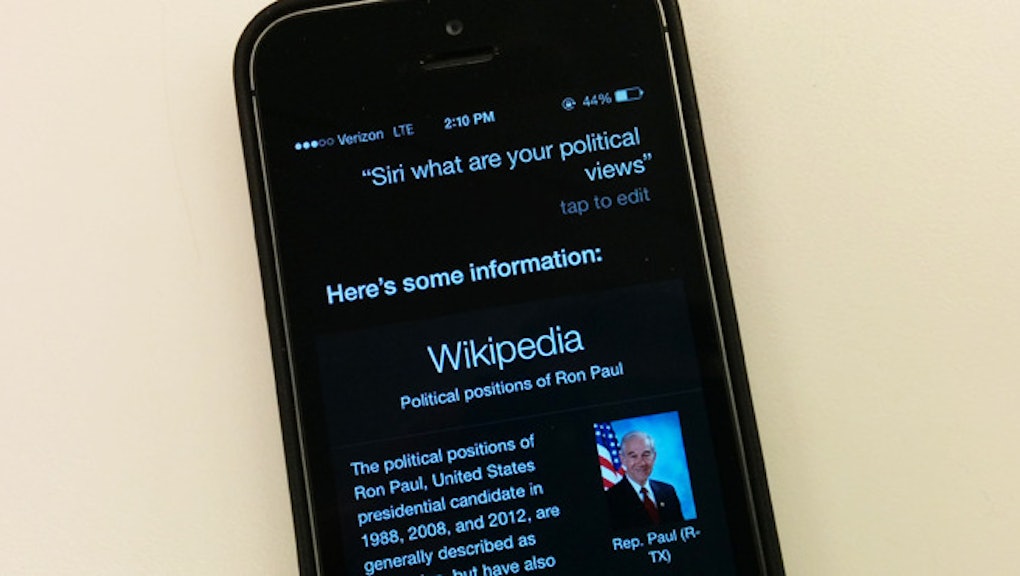 If You Ask Siri What Her Political Views Are, She'll Say ...

Siri is a libertarian, apparently.

If you ask Apple's guide-to-everything about its political views, it gives you a pretty concrete answer in lieu of its standard "can't answer that": former Texas Congressman Ron Paul (R), libertarian firebrand and founder of the Ron Paul News Channel.

See a video below:

Here's what pops up, found via Reddit's r/libertarian:

The hidden politics of Siri was confirmed by Buzzfeed's Benny Johnson and Dylan Matthews at the Washington Post, making this all somewhat official.

Seems like someone at Apple (or the original development team at Siri International) is a big Paul fan, which isn't surprising, given that the perennial libertarian candidate for president (now retired) has a groundswell following on the internet and among tech types. Paul himself even weighed in:

Just like Ron Paul, though, Siri's political views have been marginalized and suppressed by a higher power. In Paul's case, it was the Republican establishment. In Siri's case, it appears to be Apple itself, which has put its foot down hard on the easter egg, which Twitter is now reporting is no longer available:

This isn't surprising, given Siri's less-than-reassuring track record on other issues: