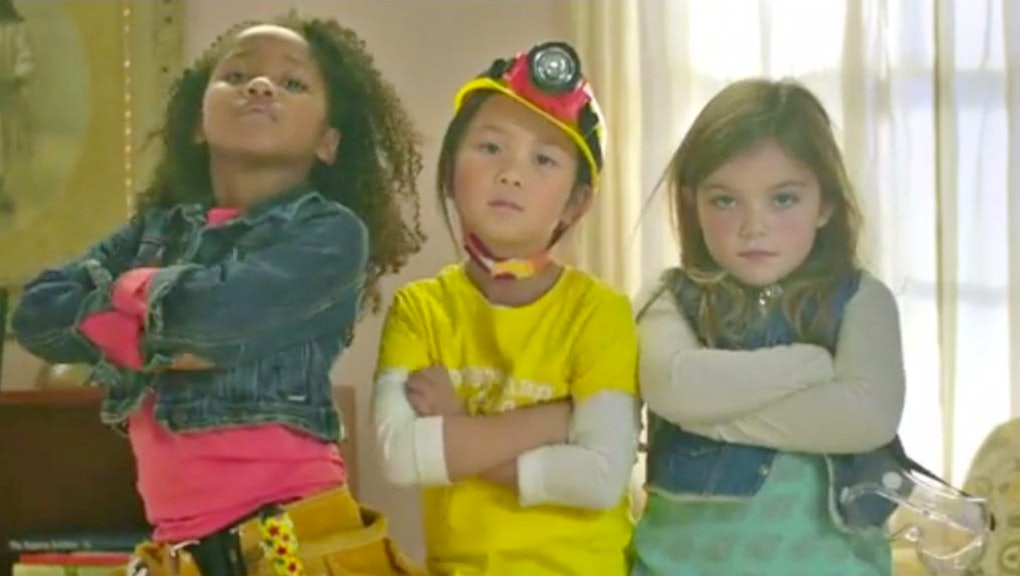 My own disinterest in science had more to do with a lack of a strong foundation than with the types of toys that I owned. My bean sprouts in cotton wool would never grow.

We've heard the facts that women are highly under-represented in science and technology fields. Believing that change should start at an early age, a toy company called GoldieBlox came up with this ad featuring three friends — a white girl, a black girl, and an Asian girl (props for showing racial diversity here) — wearing helmets and goggles. They build a Rube Goldberg machine from pink strings, swings, roller blades, and toy cars. The background music, a reimagined version of the Beastie Boys' hit song, "Girls," plays on a toy turntable. "Pink and pretty it's girls. Just like the 50s it's girls."

At first glance, the ad seems to be combating the stereotypes that little girls want to play dress up and be pretty princesses while little boys want to roll around in the mud and build things. The founder of the company — Debbie Sterling, who is an engineer herself — came up with the concept a few years ago when she was shopping for toys for her daughter and was disappointed in the lack of variety. Not every girl is interested in "glittering crowns" and "mini high heels," she told the Boston Globe. The media has already jumped in on the bandwagon about how this cutesy little song is really a powerful feminist anthem for girls. People.com praised its "incisively feminist lyrics," Slate applauded it for subverting "dumb gender stereotypes," and the Los Angeles Times quoted Sterling saying that it as "a power anthem for little girls."

While the toy is a creative invention, it should also be supplemented with more science education in elementary school. My own disinterest in science had more to do with a lack of a strong foundation than with the types of toys that I owned. My bean sprouts in cotton wool would never grow, I could never find anything under a microscope, and I couldn't for the sake of the universe figure out how to get my model rocket to launch when I was in Space Camp when I was 13. It didn't matter that I was kicking ass in other subjects like english, history, or art because, if you're not good at science, then you're not smart, right? Now here's the most problematic line in the song: "cause all our toys look just the same, and we would like to use our brains." While breaking down one gender stereotype, the ad perpetuates another — that only science is smart.

Rather than simply insisting that all little girls should be interested in engineering, GoldieBlox and other toy companies should be promoting the idea that girls can use their brains in other ways too. Not only engineers are smart. Writers, artists, designers, chefs, and entrepreneurs can be smart, too. This is the true feminist message that we should be telling all the little girls out there.