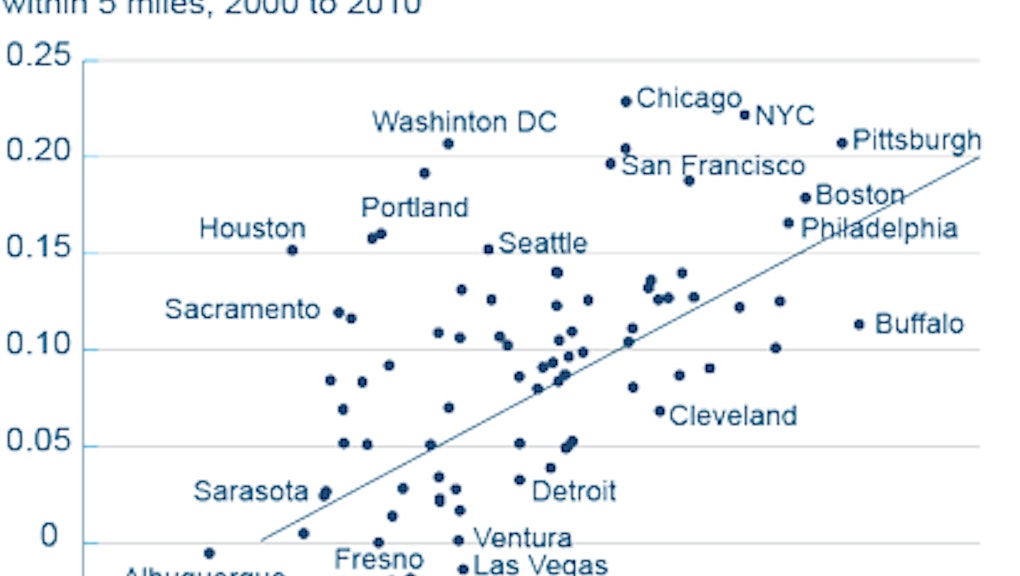 From Seattle to D.C., America's Cities Are Getting Smarter — And Millennials Are the Reason Why

The news: According to a new report by the Federal Reserve Bank of Cleveland, inner cities around the country are officially better educated than their surrounding suburbs, as college graduates have increasingly flocked to urban centers over the past decade.

The above is a key chart that compares the change in educational attainment (the number of people with a bachelor’s degree) in various cities with those same cities’ suburbs.

It shows that grads moving to Houston, Portland, Washington, D.C., Chicago, and New York City are far more likely to set up shop within their city’s limits, eschewing previous generations’ drive toward a calm life of lawn mowing, backyard grilling, and slowly dying inside.

A second chart that controls for the country’s overall rise in educational attainment shows just how different the concentration of college grads was in 1980. Back then, most college-educated individuals lived in bedroom suburbs within 10 to 25 miles of an urban center. In contrast, the tall blue line to the left of the chart shows just how close to city centers many college grads live today.

The background: After years of decline throughout the late 20th century, many of America’s largest cities are witnessing a 21st century renaissance. The cause of the turnaround isn’t entirely clear. Sharp drops in crime rates are likely the result of improved law enforcement, from quantitative analysis of policing to the implementation of holistic "broken windows" policies. Writer Jane Jacob’s seminal work The Death and Life of Great American Cities likely played a part, as it shifted urban planning’s focus from away large-scale housing and highway projects, and toward assessing the context, functionality, and needs of individual neighborhoods. It is clear, however, that the influx of human capital has further fueled cities’ resurgences, as well-educated young innovators and entrepreneurs transition older economies away from their now-shaky manufacturing bases.

Why it matters: As cities thrive, they’re not only becoming safer, but smarter. Densely populated urban areas are, once again, places where young intelligentsia from a variety of backgrounds can come together, learn from one another, and collaborate.

And given that millennials are a big part of the continuing change, it’s safe to say that urban areas are also getting better looking.