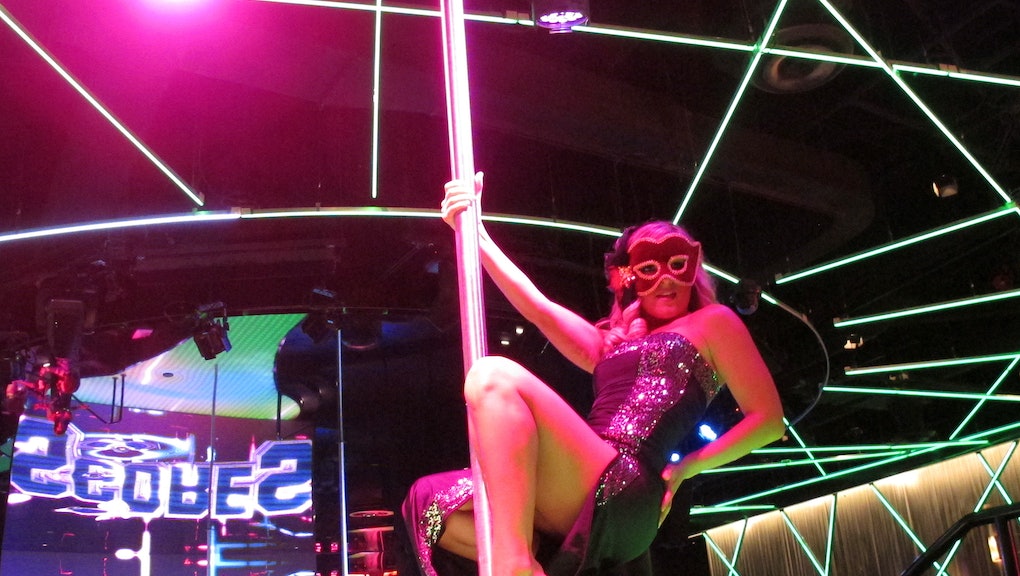 Several celebrities have made headlines for attending strip clubs in the past couple weeks, albeit for different reasons. Rihanna and Drake supposedly spent a raucous night, and $17,000, at a Houston strip club, generating speculation that they might be back together and general awe/outrage over their vulgar display of wealth. Meanwhile, pundits continued to lampoon the NFL's Richie Incognito, citing his regular offensive line meetings at strip clubs as further evidence of his dissolute character. The contrast between our collective disinterest in Drake's strip club attendance (it was the money spent, not his presence that shocked people) and our judgment of Incognito's got me thinking about strip clubs as traditional bastions of masculinity.

Strip clubs are classic locales for bachelor parties and after-hours financial brokering, but can we as men confidently attend a strip club and still consider ourselves progressives, or is this a clear-cut case of a sleazy activity that is always degrading to women?

This burlesque show, for example, could be considered empowering and body-positive; the act of stripping isn't inherently negative for performers.

My own strip club experiences are limited to three visits, the most memorable of which was in an upscale club in downtown Tokyo during high school. My friend Leighan's girlfriend, Lisa, organized a group of friends to attend, where she further arranged for a stripper to remove most of Leighan's clothes and then take a Polaroid of the two together, which we all signed it and gave to him. At the time, I thought that if she (and the other girls that attended) were OK with strip clubs, they might be acceptable for us guys too.

I had fun while in the club, but felt dirty after I left, though I couldn't quite pin down why.

Despite being one who generally carefully considers social justice issues, I've still never really formed a strong opinion about strip clubs. After talking to several friends of both genders about this recently, I was surprised to learn that they didn't have strong opinions either. They all expressed a general, albeit mild, repugnance for strip clubs as an entity, but also clarified that women should be able to strip if they choose to do so and if the conditions are safe.

Whether strippers freely choose to work at the clubs is a key issue here, and an extremely grey one at that. Stripping is often a gateway into prostitution and human trafficking. Since there is no Angie's List of strip clubs, no easily accessible way to vet whether or not the strippers are treated with dignity (or even legally), how can you really know if the women in front of you are there of their own will?

As Scott, 26, put it, "I haven't been to a strip club since high school because of the chance that I could be supporting an industry where someone is more or less forced to sell their body." He doesn't know for sure he'd be doing something unethical, but why push it?

One nation has expressed a strong opinion on strip clubs. In 2010, Iceland banned them, inviting praise for their progressive feminism. In the wake of the decision, however, a Feministing author claimed the move would actually hurt the women workers, forcing the industry into a more dangerous, unregulated underground. This year, Meghan Murphy of Al Jazeera responded by saying that there is "no evidence" that this has happened yet, and that the ban remains among the most feminist government initiatives in the world.

I'm not proposing a similar ban in the U.S. (though I also wouldn't be upset if one was implemented). Rather, as a masculinity columnist, I'm saying that I can't in good conscience endorse attending a strip club as a healthy outlet for masculinity.

Skipping out on a strip club during a bachelor party is one example of a clear vote against strip clubs.

Even if we do attend, we can adhere to a few common sense principles. For example, even though the strippers are scantily clad and rubbing themselves against you, most clubs have strict no-touching rules. If you break that rule, or even bend it, you're not just "being playful" — you're sexually assaulting a woman. A former stripper writing for The Atlantic cited the rules as the most important part of a stripper's empowerment and safety. (It's worth noting that she worked at one of the country's few strip clubs with protections afforded by a union.)

For whatever reason, the media judges Drake and Incognito differently, even though they participated in the same activity. I personally think they shouldn't go in the first place —the ethical and legal lines between stripping and sex work are so blurry, it's best to just avoid them.

If you do insist on bringing the boys to a strip club for a bachelor party, or a rowdy night out, just remember what Calvin, 26 says: "As a patron you should also acknowledge it's not the real world, and everyone in there is a human being."