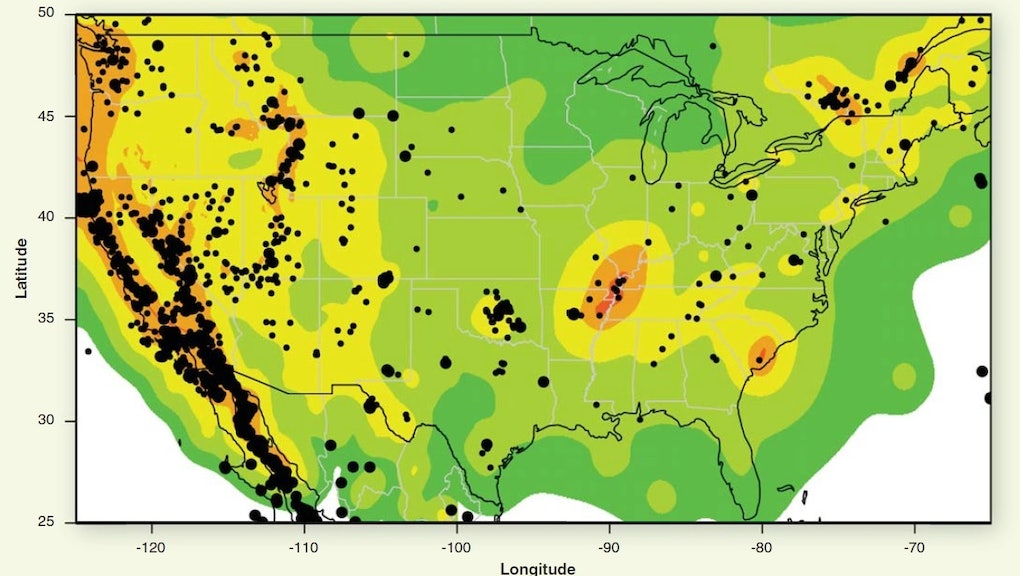 More Earthquakes Are Happening in the U.S. — and Fracking May Be to Blame

The news: The colorful map below, from the United States Geological Survey (USGS), visualizes a fascinating and disturbing trend that only a Syfy original movie screenwriter could love: man-made earthquakes are on the rise in the United States.

The map accompanied the USGS' "Man-Made Earthquakes Update," which reports that seismic activity in central and eastern states has increased dramatically over the past few years. Small black dots represent 3.0 magnitude earthquakes, while larger black dots mark quakes of magnitude 4.0 and greater. It turns out that those black dots are proliferating in unexpected areas (hazard levels are shown in color).

The background: The increased rumbling is, at least in part, a byproduct of hydraulic fracturing for oil and natural gas, or fracking. The controversial process involves injecting a highly-pressurized slurry into a deep wells in order to fracture difficult substrates, like shale, and free otherwise inaccessible fossil fuels. As a result, fracking, by its very nature, produces a large amount of waste fluid (four to six million gallons per well, according to the New York Times), which some mining companies dispose of by reinjecting it into already fracked wells.

(The USGS report makes sure to point out that wastewater disposal is far more responsible than the fracking that preceeds it, as the latter "is only very rarely the direct cause of felt earthquakes.")

Central Oklahoma has been particularly shaken up by this trend. As the map shows,  the region has been subject to a "swarm" of quakes since 2009. Prior to that year, the average number of annual magnitude 3.0 or greater earthquakes was one to three. It's now 40.

The takeaway: Despite organized opposition to the practice, and activist and director Josh Fox's compelling documentary on the subject, hydraulic fracturing is on the rise both nationally and internationally, and doesn't look to be going away any time soon. The process has increased oil and gas output, lowered oil prices, and reduced American reliance on foreign fossil fuels. As long as we're going to continue fracking, it may be worth turning to alternate methods of waste disposal that are less prone to literally tearing the world apart.