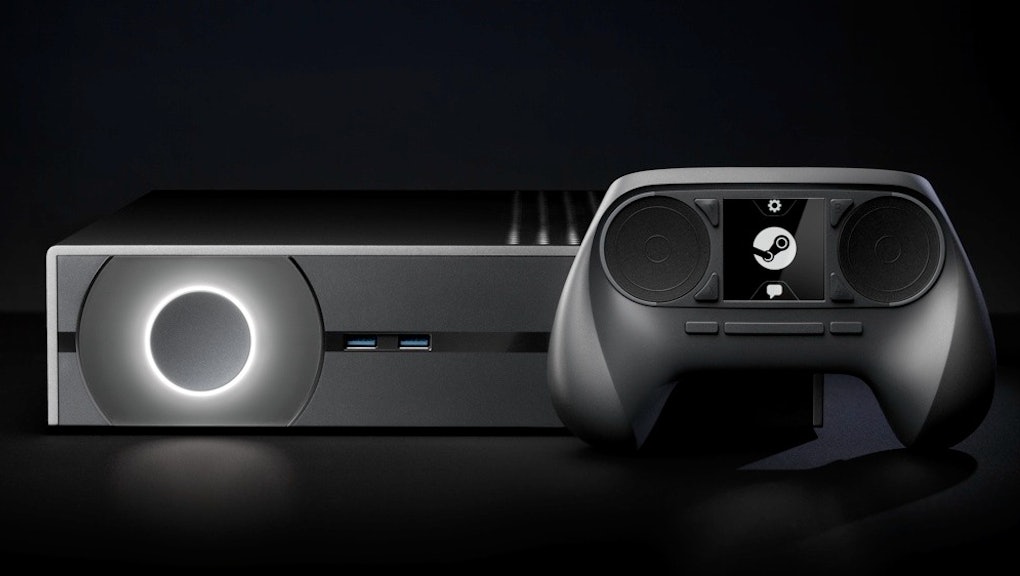 Forget the Xbox One and PS4, the Valve Steam Machine is the Real Deal

The news: With the Xbox One launch on Friday and the Playstation 4 already on the market, you have overlooked the looming competition on the horizon: No, not Nintendo, Valve's upcoming new console-PC hybrid, Steam Machines.

Unlike the traditional consoles made by Sony, Microsoft, and Nintendo, which offer a closed gaming and home media environment which isn't very flexible and forces the end user to play by their rules (and prices), the Steam Machine is going for an open environment which encourages consumers to upgrade and modify various parts of the device to increase power and longevity. Valve revolutionized how PC gaming worked with their Steam distribution platform; now they're trying to do the same with gaming consoles.

The device is only in beta with an unknown release date and a distinct lack of information on specifics, but consumers already have a pretty good idea of what the Steam Machine will look like.

What's it got going for it? Well, for one, it comes in a variety of hardware configurations and prices, virtually all of which are expected to be competitive contenders with the Xbox One and Playstation 4 in graphics power. Just check out these specs:

The 300 prototype units will ship with the following components:

Plus, it runs a modified Linux distro called SteamOS, meaning it's more like a gaming PC than a console. It's also easily capable of running other operating systems (and Valve in fact encourages end users to do this). With an extensive Linux-compatible library out of the box and a high likelihood that the number of available games will swell dramatically after release, SteamOS is poised to capture a large share of the market. Users would also be able to transfer their entire Steam library over to the new machine with minimal effort, and since it's all digital, play their libraries without worrying about physical discs.

And it's all designed from the ground up to be extremely hackable, meaning extreme users will have endless fun finding new ways to modify everything from the hardware configuration to the controllers.

So what's (potentially) wrong with it? Without a bevy of publishers willing to partner with them, SteamOS users could potentially miss out on exclusives from Xbox, Playstation, and Nintendo.

One major sticking point: the controller. While the new touch-based gamepad looks to combine the comfortable Xbox controller with a traditional keyboard and mouse configuration, it's unclear whether PC gamers used to the latter will be impressed, or whether there's any market for Xbox fans willing to pay significantly more to switch over. While you can probably still hook up a keyboard and mouse to get the extreme control precision PC gamers crave, it's not so clear anyone would want to do that on their living room couch. Forbes' Erik Kain says that "Presumably the idea is for die-hard PC players to want to make the switch from their monitors in their bedrooms to their flat screens in their living rooms," but notes that most PC gamers already have a machine quite capable of competing with the Steam Machine, so no one's really confident why they'd want to switch.

With high-end specs, Valve hasn't announced whether the Steam boxes will be as cheap ($400-$500) as the current next-gen competition, though the current Steam library offers a gigantic amount of games at cut-rate prices, all playing instantly upon download.

On the extreme negative side, here's what ExtremeTech's James Plafke had to say:

"What we have left is an operating system that doesn’t seem to matter much, a controller (lacking the keyboard so important to most PC games) that could easily be worse than a traditional gamepad, and a box of hardware that sounds identical to the PC under your desk, and not the console under your TV. What’s Valve doing?"