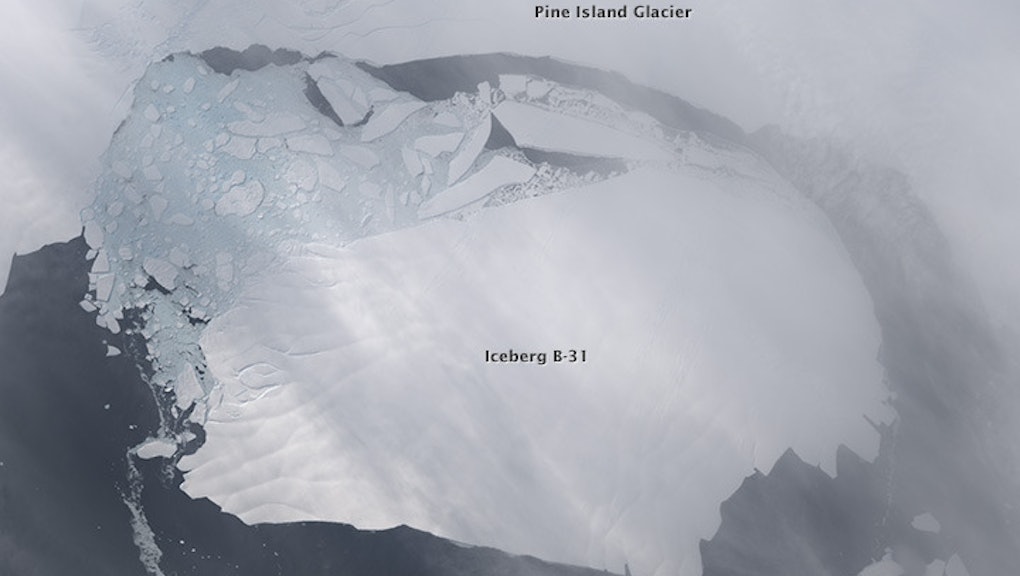 This Iceberg the Size of Singapore Just Broke Off From Antarctica

The news: On Wesneday, NASA's Earth Observatory announced that a 270-square-mile slab of Antarctic ice the size of Singapore had broken off of the continent and could affect shipping lanes or the speed of the ocean's currents. New icebergs are not necessarily a surprise, but the increased rate of iceberg generation is consistent with the hypothesis that warmer waters are weakening coastal ice shelves, which could lead to higher water levels and coastal flooding around the entire world.

Meanwhile ... In Warsaw, Poland, representatives of most of the world's poorest nations have staged a mass walk-out from the United Nations climate change conference in Warsaw on Wednesday after the United States, European Union, Australia, and other developed countries refused to discuss the issue of who would pay compensation for extreme climate change-related events until 2015 or after.

The 132 countries of the G77 and China bloc took the coordinated move during talks about "loss and damage," or extreme climate change events such as Typhoon Haiyan, which killed up to 4,000 or more people and displaced millions.

In particular, climate change activists blamed Australia for not taking the negotiations seriously.

"Discussions were going well in a spirit of co-operation, but at the end of the session on loss and damage Australia put everything agreed into brackets, so the whole debate went to waste," said scientist Saleemul Huq, whose work helped put the issue on the agenda.

Developing countries have demanded that the UN start an institution to oversee compensation for damage from extreme events, which disproportionately both impact poorer nations and, under the theory of anthropogenic climate change, originate from the pollution of richer ones. Rich countries are obviously hesitant.

"The EU understands that the issue is incredibly important for developing countries. But they should be careful about … creating a new institution. This is not [what] this process needs," said EU climate commissioner Connie Hedegaard. But "… We cannot have a system where we have automatic compensation when severe events happen around the world. That is not feasible."

Why's this important? As a new study by the Climate Accountbility Institute in Colorado recently demonstrated, just 90 companies have generated nearly two-thirds of the greenhouse gas emissions produced in the entire modern industrial age, fueling increased global temperatures while generating massive concentrated wealth in the process. (Click here for an interactive infographic).

Half of these estimated gases were produced in just the past 25 years since 1988, well after governments were aware of the dangers of climate change, and many of the same corporate entities are sitting on massive reserves of fossil fuels which risk making the problem even worse.

And if conventional fossil fuels aren't enough, these same companies are intent on using potentially-dangerous technologies like tracking, in which drillers shoot a mixture of water, sand, and chemicals into the bedrock, to access previously inaccessible reserves of fossil fuels. According to Citizens for Responsibility and Ethics in Washington, in the U.S., these are the top 10 congressional recipients of tracking industry money:

What's the end result of all this? For one, six of the 13 strongest cyclones on record at landfall have happened since 1998, according to Weather Underground:

It's clear we need climate change action more than ever.