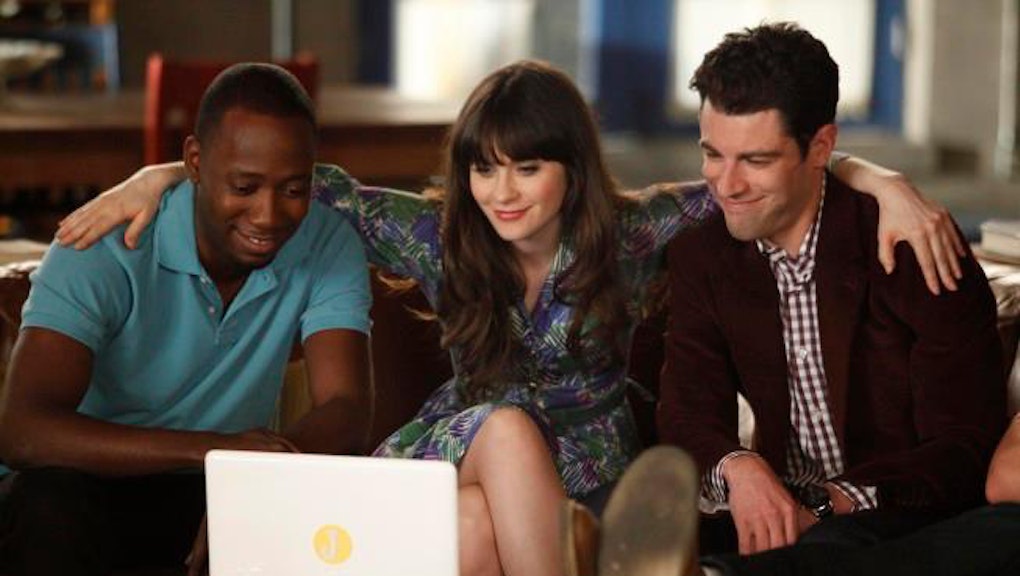 7 Things 'New Girl' Introduced to Our Lives, and We Now Can't Live Without

Being a New Girl fan not only means keeping up with the show's happenings, but also comparing the characters' behaviors to our own. Over the past three seasons, we've come to understand and love some pretty ridiculous habits in that loft. Nick, Jess, Schmidt, and Winston have opened our eyes to an array of homemade props and made-up words that somehow fill a hole in our hearts we didn't even know existed.

That's right, New Girl has injected much more than a consistent 30-minute block of Zooey Deschanel's bangs into our lives. Check out the best things New Girl has shown us that we can no longer imagine living without.

You know when you make fun of your friend for that one annoying thing she does? There's finally a name for it, thanks to these beloved characters. According to the roommates, everyone has a "pogo." From Schmidt's toenails to Nick's perpetual malnutrition, it seems everyone has at least one gossip-worthy attribute in the loft. By introducing this term, New Girl has made it even more fun and socially acceptable to embarrass your best friends.

In the perfect blend of alcohol and American history, New Girl is responsible for giving the world the brilliant gift of True American. Spotlighted in the episode "Normal," the show's completely original drinking game has Jess and co. avoiding the floor, which is lava, and throwing beer cans away into a huge pile referred to as the "junkyard." Described by the roommates as half drinking, half life-size Candy Land, it ends up being something we want to try with our closet pals. There's even a semi professional website with all the official rules. How can you not love New Girl for giving us something better than beer pong?

This magical instrument is not just for a third grade classroom. The feeling stick, introduced by our favorite always-prepared teacher, Ms. Jessica Day, gives everyone, even emotionally unavailable 30 year olds, a platform for self-expression ... because we know everyone has feelings. After seeing how it gets Nick to open up, we're all considering crafting one of those for ourselves. Don't forget to make a travel size.

4. Deciding if you’re a doer or a dumpling-er.

As seen on the recent episode "Menus," New Girl gave us the ability to look to our favorite Chinese food takeout for a pep talk. As Coach takes on the impossible task of getting Nick to exercise, the workout is cut short by Nick's urge to quit and eat the dumplings he ordered for breakfast. In one his most motivational moments, Coach demands Nick to put the dumplings down and do something. So, of course, this leads to our new favorite inspirational catch phrase: "Are you a doer or a dumpling-er?"

5. Having your own theme song.

Since the pilot episode, Jess made our Disney channel-inspired dreams come true by asserting that life actually can be a musical. Although Jess hasn't broken out into song as much lately, every time we hear the melody of "Hey Girl," in the opening credits, it's a reminder that everyone should have their very own theme song.

When New Girl first aired, we could all hear the distant clink of douchebag jars being filled around the world. It was the first thing the show introduced us to, and we're forever grateful. We finally have a monetary way of punishing our friends when they make those downright below-the-belt comments.

Thank you, New Girl writers, for introducing us to absolutely everything Schmidt says. And for naming a main character Schmidt. Again, thank you. Actor Max Greenfield is a genius when it comes to over-pronouncing the simplest words like "sweater" and "youth." Knowing a guy like this exists, at least in the imagination of TV writers, is perhaps one of the greatest takeaways from this show. Plus, we all get a hearty lesson in linguistics every Tuesday night.