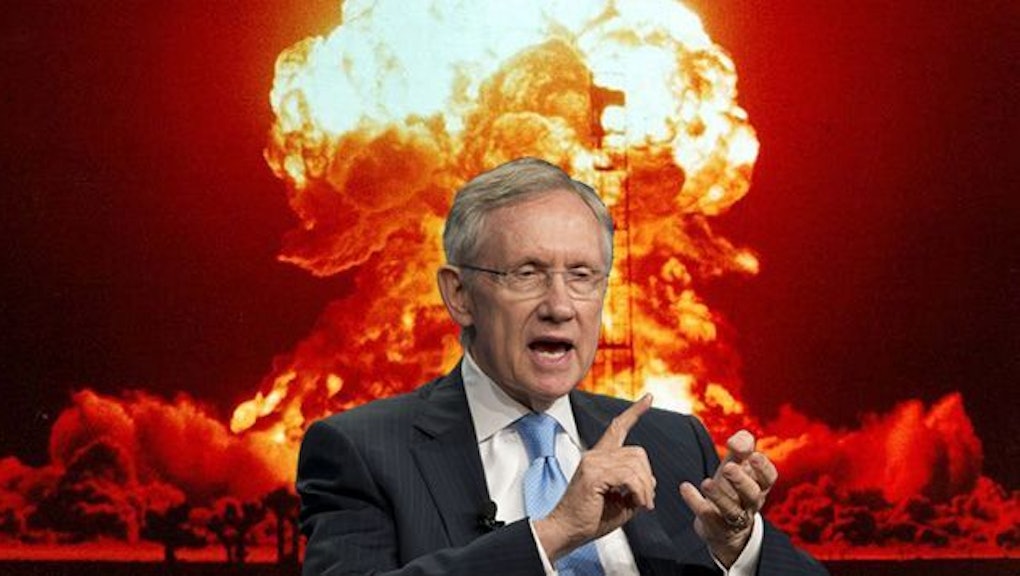 The news: Senate Democrats have finally come through on their threat to invoke a “nuclear option” with regard to filibuster reform in response to continuing deadlocks over presidential appointees. The procedural change will allow the Senate to approve some nominees with a simple 51-vote majority, rather than the 60-vote supermajority that was previously required by filibusters, making it considerably easier for Democrats to plow through President Barack Obama’s dozens of outstanding appointments.

The backstory: Let’s be honest. Like the words gerrymander and carpetbagger, filibuster is an antiquated-sounding term that has the power to terrify 5th grade civics students taking a pop quiz, and bore the pants off of just about everyone else. However, as dull as it might sound, the Senate’s rule change has wide-ranging implications, and could alter the course of the troubled 113th Congress and Obama’s second term.

It’s worth taking a moment to better understand just what’s going on, why it’s important, and why a bug-eyed Wolf Blitzer is hyperventilating on live television. Here’s a pug puppy giving a human a high-five, for your trouble:

The filibuster is a parliamentary procedure that allows senators to hold up legislation. The U.S. Senate has, traditionally, embraced the idea of unlimited debate. Senators can bloviate for as long as they wish and have no requirement to stay on topic, enabling them to grandstand, read phonebooks, and recite rhyming children’s stories in order to block a vote, or make some kind of point.

If the senate gets sufficiently fed up with such antics, they can invoke cloture, which ends debate and brings a bill to a vote. However, cloture requires a three-fifths vote to invoke  — at least 60 senators have to be on board, a much higher threshold than the simple 51-person majority usually needed to pass a bill. Invoking cloture has been exceedingly difficult in the current senate, which is composed of 53 Democrats, two independents who caucus with Democrats, and 45 Republicans.

Even the threat of a filibuster (a “silent filibuster”) has been enough to derail legislation, especially in recent years. Given the rash of filibusters, Obama’s administration has done a particularly dismal job of filling jobs that require a presidential appointment. As Obama noted in a briefing, in the 60 years before he took office, only 20 presidential nominees had their appointments filibustered. During Obama’s presidency, more than 30 nominees have been filibustered, and such filibusters have become all but routine.

Some highlights, or low points, depending on how you see it: Sen. Rand Paul (R-Ky.) filibustered against the appointment of John Brennan as director of the CIA, in order to highlight Obama’s controversial drone policy. Sen. Lindsey Graham (R-S.C.) has threatened to filibuster nominations unless he gets hearings on the attack on the American diplomatic mission in Benghazi, Libya. The administration has gone through procedural acrobatics in order to circumvent the Senate’s intransigence, but its recess appointments were shot down by a circuit court. Sen. Ted Cruz (R-Texas) spoke for 21 hours in what sort of looked like a filibuster, but was really just his way of hating on the Affordable Care Act, and trying to be one of the cool kids.

Today's reform eliminated the need for three-fifths of the Senate to invoke cloture on presidential nominees, making the approval of nominees (with the exception of Supreme Court Justices) passable by simple majority. The 60-vote requirement to invoke cloture on regular legislation is untouched, for now.

What’s going to happen: Senators will waste the rest of the day taking to the airwaves to condemn or support Senate Majority Leader Harry Reid’s (D-Nev.) drive toward invoking the nuclear option. (Paul called Reid “the dictator of the Senate” on CNN. Fun!) If the new filibuster rules remain in place, it may make it possible for Obama to make headway with filling judicial and executive posts. It’s more likely, however, that the rules change will lead to even greater friction, because, to use Sen. John McCain’s (R-Ariz.) words, from Republicans' perspective, the shift, “puts a chill on everything that requires bipartisanship.”

Finally, Cruz will need to take up a new hobby. Maybe tennis.