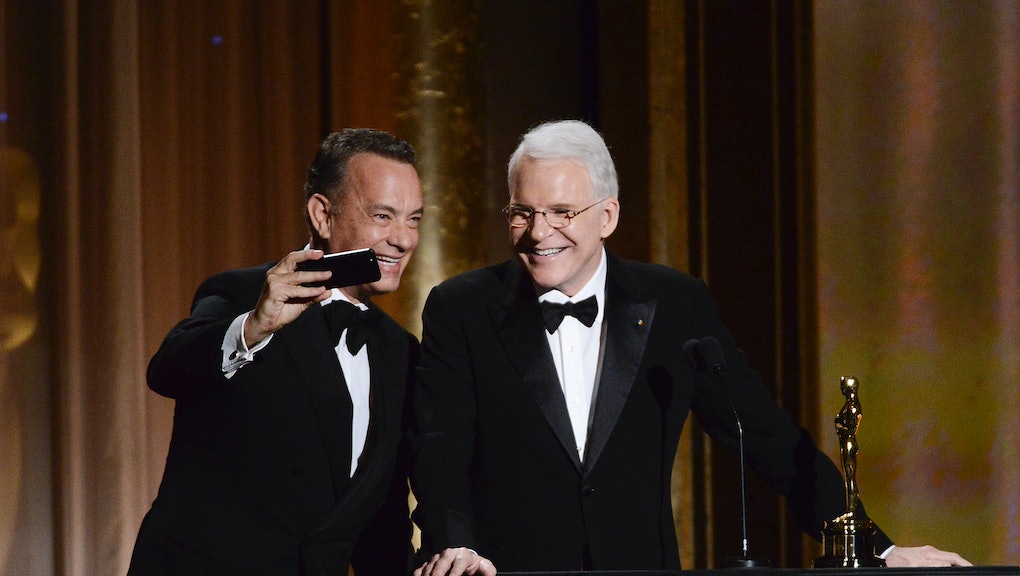 Let's All Raise Our Selfie Awareness

Editor's note: This piece has been updated.

You can pry my selfies from my cold dead hands, and then (since I am now dead) admire how good I looked when I was still alive.

This week, the internet let out a collective groan when the Oxford Dictionaries declared "selfie" the word of the year. There’s a certain delicious irony here. People who complain about the word selfie lend it legitimacy through repetition; as Oxford Dictionaries notes, use of the word "selfie" in the English language has increased by 17,000% since this time last year.

For my part, I was mostly ignoring all the new selfie articles until my Twitter-friend Rad-Femme Lawyer cheekily Tweeted out a "cry for help" in response to a piece by Erin Gloria Ryan at Jezebel which, in addition to calling selfies a cry for help, labeled them a "high tech reflection of the fucked-up way society teaches women that their most important quality is their physical attractiveness."

Ryan's article points to what we already know about selfies. Though they have been used as evidence of the rampant narcissism of the millennial generation writ large, we can't pretend there isn't a gendered element to these images. We all know that when we talk about selfies, we're usually talking about young women taking pictures of themselves.

But if selfies are mostly a "woman thing," then why is there a problem?

Images of women are used to sell things all the time. The big difference here is that the selfies are created by individuals (including women) by themselves, rather than by a commodified fashion and beauty industry which sets the standards for what we consider beautiful.

I take selfies constantly. Sometimes, I send them to people to say hello, because it’s an easily accessible technological advancement, and a lot warmer than connecting through just text.

Hi! This is my face.

It’s entirely possible, I suppose, that I am just a rampant narcissist. (I am a writer on the internet, so it’s not as though I despise attention.) But the accusations of narcissism leveled against women for taking pictures of themselves sounds a lot like the criticism that women regularly get seeking any kind of attention at all. As Laurie Penny points out in her book Cybersexism, men are almost never called out for seeking attention, while women are expected to be seen and not heard. Similarly, at Slate, Rachel Simmons argues that dismissing selfies dismisses a tool for self-promotion, a tool that young girls are typically expected not to use because it's seen as tactless for women to be so strategic.

All the railing against selfies, like the theory of self-objectification put forth by cultural critic and radical feminist Gail Dines, ignores the fact that there are people who are not celebrated the way conventionally attractive people are, people for whom taking a selfie can be an act of defiance.

I count myself among these people. Growing up, self-acceptance was nearly a sin for me. As a woman, I understood that I was supposed to dress well, work at being thin, take care of my hair, skin, and nails, and never EVER think that I was beautiful. I needed to smile, too, ALL THE TIME. My job was to put in the work; other people’s job was to evaluate me.

Sometimes I take a selfie  just because I like my hair that day. But I am a cisgendered and able-bodied white person. Others, like Blaqueer, have very different reasons for wanting to capture his image.

“I take my selfies because I am that guy who, unless he takes the picture or suggests it, doesn’t get his picture taken.”

When I asked Rad-Femme herself how she felt about these mini-portraits, she said:

“I think selfies are more about the taker than the viewer. Seeing it as "about" the viewer erases the woman taking her own pic. And I see the way social media and tech have grown, and we are very visual and have more cameras, so OF COURSE we take pics of ourselves."

It’s easy to hate on selfies, but unless we examine why people take them (beyond the idea that every woman is just obsessed with themselves, or taught to be obsessed with themselves), our conversations about these self-portraits will remain rigid and boring.  It's pretty clear that capturing our own images can be about far more than simply the performance of our looks for other people. It can be a road to self-acceptance. The most radical act a person who lives on the margins can do is to love themselves, just as they are, at this very moment.

What isn't empowering about that?