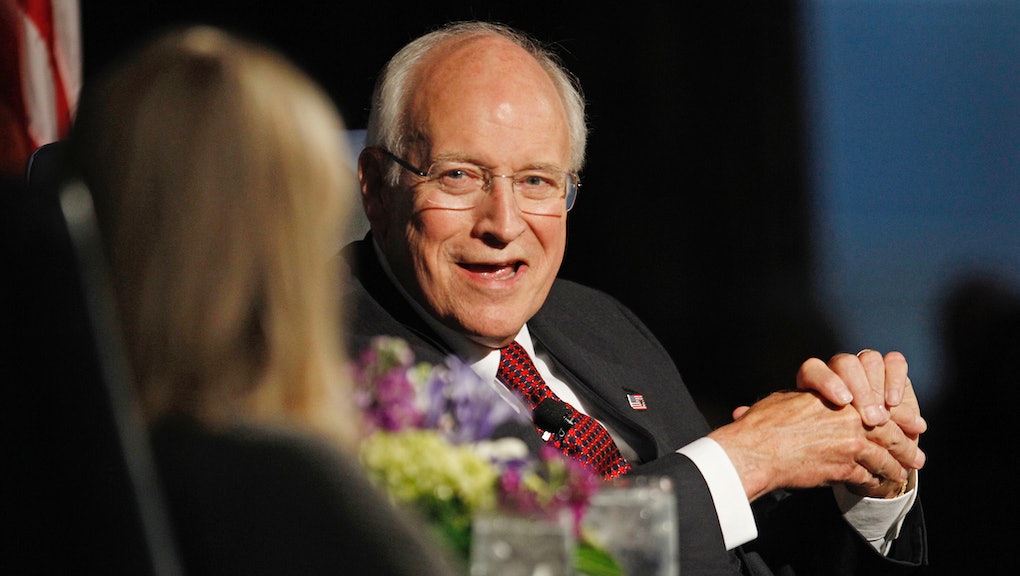 Dick Cheney is Being a Dick. Again.

As you've undoubtedly heard, the Cheney family has once again showed they are the Kardashians of politics. Two weeks ago, Liz Cheney, who is running for the Senate in Wyoming, said on Fox News Sunday that she believes in "traditional marriage."

All fine and good for bigots and behind-the-times Republicans, except for the fact that Liz's sister, Mary, is gay and —oh — MARRIED. Thanksgiving is going to be AWKWARD, and not even because Dick Cheney might shoot someone. Again.

Throughout last week, this story developed like so: Dick Cheney, in an effort to reclaim his throne as Most Unlikeable Cheney, voiced his support for Liz, while Mary and Heather Poe, Mary's wife, spoke out about how supportive Liz has been in the past.

Poe said, "Liz has been a guest in our home, has spent time and shared holidays with our children, and when Mary and I got married in 2012 — she didn't hesitate to tell us how happy she was for us."

Worse, this week, some have begun to speculate that Liz Cheney's recalcitrance on marriage equality might show conservatives that they can be anti-same-sex marriage and still win elections. That's bad news for our generation, which largely supports marriage equality. We may have to stand up to the generations before us to make any kind of progress.

So, does Liz support equal rights behind closed doors? I don't know, but if she does, her anti-equality statements are even more annoying than originally thought.

For a moment, I'd like to speak to the [alleged] Liz Cheneys of the world who, for your own reasons, choose to keep your support for the LGBTQ community quiet — in a closet, if you will.

Sorry, that was rash — but honestly, please consider going public. I know a thing or two about being in a closet. You're constantly making sure no one knows how you really feel, constantly afraid of the rejection you might face if you come out, terrified of such vulnerability — but trust me, it's better to be honest. The more vocal people are about their support for equality, the more unacceptable homophobia becomes. We can't do that without you.

Look, there's no need to make your Facebook cover photo a giant rainbow just because you believe in equality, but when all of your friends are changing their photos to equal signs, follow suit, even if you "don't want to get political" on social media. This isn't about politics; it s about human rights. Speak up when your homophobic uncle starts ranting this holiday season, tell your friends to stop using the "F" word (the one that rhymes with hag), because it's 2013. It's time to stop being a bystander and come out as a straight/cisgender ally.

As the Cheney family feud demonstrates, this is truly a turning point for equality in America and the voice for equality needs to be as loud as possible. If you're a supporter, be an open one.