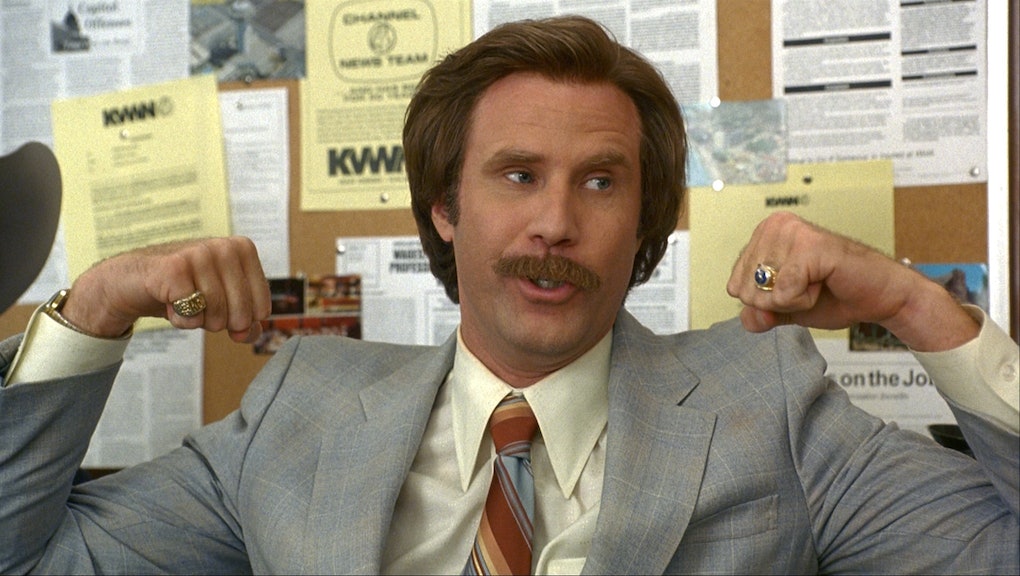 The Importance Of 'Anchorman' to the Bro-Comedy Genre

Anchorman 2 was released this week, nearly a decade after the original Anchorman was in theaters. The sequel's release seems to have triggered mass nostalgia from our generation. Could it really be that Anchorman was first in theaters 10 years ago?

Given how frequently the film is quoted, it feels as if it has always existed. Somehow, more than most movies, it gave our generation a certain kind of humor that has become indistinguishable from our own jokes. It gave us the key to the collective sense of humor that came to define our generation — and especially our generation's bros. With the popularity of Ron Burgundy and his news crew, the emotionally infantile became the main subjects of our humor. He gave us the archetype for the man-child.

Ask most people still in their 20s to recite parts of the movie and they could easily remember jokes from the film. These are cultural tidbits that have wormed their way into the collection of everyday American idioms. Drinking milk on a hot day will forever be thought of as a bad choice. More than individual jokes, though, people remember the tone of the film — bombastic, simultaneously bigoted and endearingly naive, and always clueless (or classy). Ron Burgundy's voice and mannerisms set the paradigm for the vast majority of the comedies to follow.

Judd Apatow, producer of Anchorman, pioneered the flock of Ron Burgundy derivatives that our generation (and especially the bros) so loves. After Anchorman, Apatow went on to produce Superbad and The 40-Year-Old Virgin, which also featured these types of characters — various males arrested at different levels of development. But the best measure of Anchorman's influence is the league of intensely-quotable imitators it created beyond the Apatow crowd. Its humor resonates in non-Apatow flicks like Wedding Crashers, or Borat, and even Paul Blart Mall Cop. Taken collectively, it's easy to see how dominant the emotionally-underdeveloped character has become in comedy. Ron Burgundy may have gone away for 10 long years, but we haven't stopped watching him.

The common personality traits in these comedic protagonists are pretty telling. One is a particular kind of cluelessness and self-deception at work, usually coated by a heart of gold. Add on varying degrees of intentional or unintentional childishness, and you have a distillation of the man-child we love and imitate. Anybody who has thought about millennials knows that these traits resonate for a reason.

It feels like we've been watching the same character over the past decade. The film that inaugurated this cultural trend has come back to profit from it once again. Whether it be in the field of relationships, work life, or sexual experience, the prevailing idea in most of these Anchorman-inspired comedies is that the central characters have to start acting their age. Maybe this is just the humor of a generation always being told it isn't. With the return of Ron Burgundy, it seems that the humor of arrested development isn't going anywhere, either.