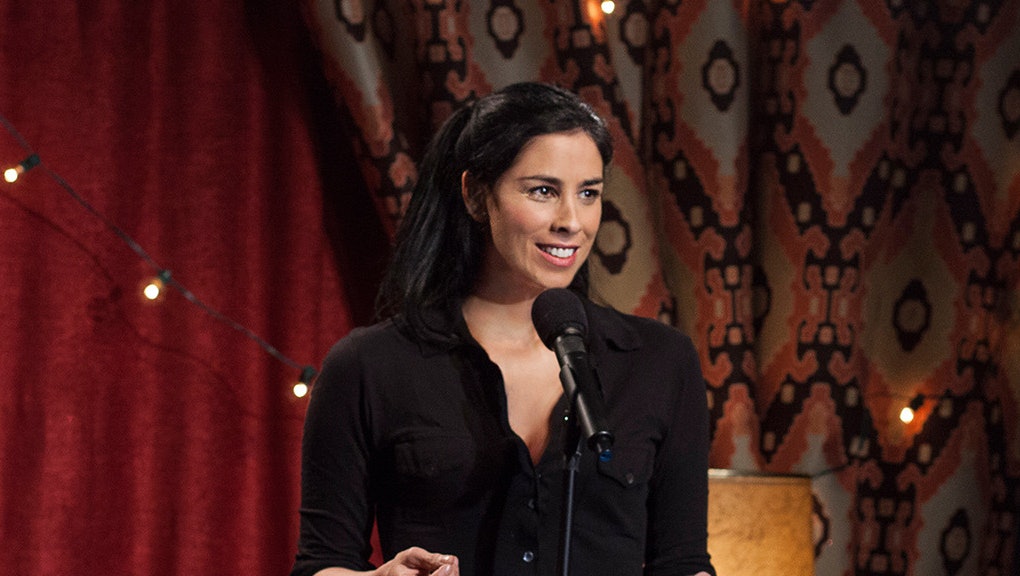 Sarah Silverman HBO Special: What Fans Will Love and Hate About 'We Are Miracles'

Sarah Silverman is back in all of her deviously provocative tweeness. This time, she has a brand new HBO special, We Are Miracles. The special is a live stand-up show at LA's The Largo Theater — though in the smaller 39-seat room. Silverman makes a limp joke about the theater size to start off the special, but it doesn't quite land. Unfortunately, that's the case with a lot of the special.

In the opening sequence, a convertible full of tattooed Latino guys pulls up on Silverman warming up outside of the club, and poke fun at her for playing such a small venue. "It's called intimate, fuck-face!" she exclaims after taking a drag from their joint. But the scene is somewhat half-baked — a dash of profanity here, a poke at racism and sexism there, but all without really saying anything or taking any thing too seriously. That's the problem. In keeping up her act as the insecure narcissist, Silverman often misses the chance to really hit her jokes out of the park.

Before the show is set to begin, Silverman screams at the Latinos, "Tell me I'm great!"

"You're crazy, ace!" They respond.

"Crazy great!" she smirks back, in unmistakable confidence. This is the central tension in her act: which Silverman is the real Silverman? Is she unsure of herself or too sure of her self?

In the special, Silverman tackles "big" topics: religion, feminism, racism, mass commercialism, and narcissism. Some of her observations intelligently question our society's morals, or sensibly criticize our own self-perceptions. Some even reveal signs of Silverman's subtle comedic genius, like when she talks rape: "Rape jokes are the hidden gem in comedy," she explains, because they are the "safest jokes to make." Who's going to complain about a rape joke? And then, in a typical Silverman innocent-sounding-but-actually-provocative after-thought, she adds, "not rape victims, because they're not complainers."

In a swift bit, Silverman has made an astute observation about our national humor, while finishing it off with a real twist of comedic shock. But these laugh-out-loud moments are unfortunately spaced with longer spans of unremarkable quips, many of which teeter on the edge of ranting or unimpressive personal anecdotes. There is the list of rules to live by that she's selflessly put together for us, with revelations such as, "If you quit being cunty, the whole world will stop being against you." Get it? She's using profanity and being confrontational, but at the same time she's so adorable.

But, as she tells us at the beginning of the show, she doesn't "need segues." It's called intimate, fuck-face, remember? It is, in fact, so intimate that many of her routines feel like she is reading them off a notepad. And yes, while some of that may be her playing the insecure comedian, the act often becomes too real, and the delivery of the joke gets sacrificed in the process.

While Silverman's performance certainly comes nowhere close to representing her best, We Are Miracles is certainly not a bad show. Silverman remains, for the most part, engaging. But this 39-seat show didn't need a national audience.