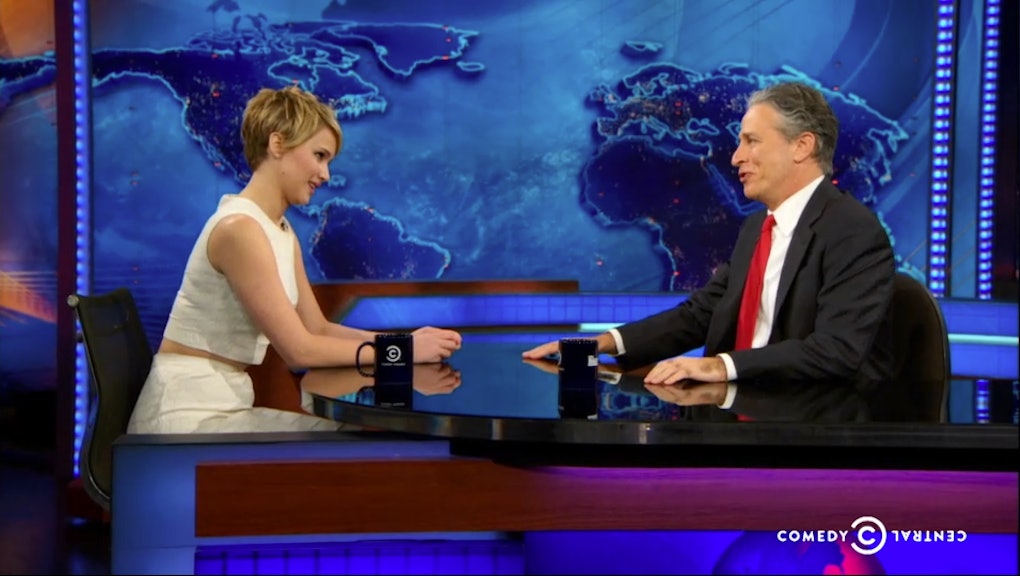 Jennifer Lawrence's whirlwind tour of talk shows and promotions for The Hunger Games: Catching Fire has been exhausting, for her and for us. For starters, she's charming and witty every time she sits down (or stands, or falls down) at an interview, and being confronted with the massive amount of great Jennifer Lawrence interview moments is a little overwhelming.

Lawrence's Thursday appearance on The Daily Show was no exception. Despite her obvious fatigue (not surprising considering her schedule and recent bout with hospital visits), and after all the playful banter, Lawrence and Stewart made a point to address Lawrence's intense popularity on the internet. For a girl who was a relative unknown just a few years ago, she's remarkably well-suited to life in the limelight. She remains laughingly incredulous at the amount of attention she receives for fairly small things. Basically, she's just the right amount of 'Down to Earth' for cyberspace.

Lawrence's surprising combination of offbeat, quirky humor and self-confidence makes every facial expression into the perfect GIF, and every self-deprecating story a hilarious youtube clip. At last night's Daily Show appearance, she claimed to have too much attention online, although that only came out after she confessed to having considered grabbing a prop from an earlier gag — a real (albeit dead) turkey — and running onto to the stage wearing it on her head.

Stewart agreed that it was good she hadn't since it probably would have broken the internet.

Besides the possibility of Lawrence wearing a dead turkey on her head, last night's interview is well worth the watch. Lawrence's capacity for quick banter is especially suited to Stewart's own comedic abilities. While Stewart has interviewed presidents and dignitaries, Lawrence mercilessly teased Stewart and wasn't hesitant to point out the relative 'informality' of his interview preparation.

Even more importantly, Stewart has a big reveal in the interview. He's found Lawrence's celebrity look-alike. It's young Helen Mirren.