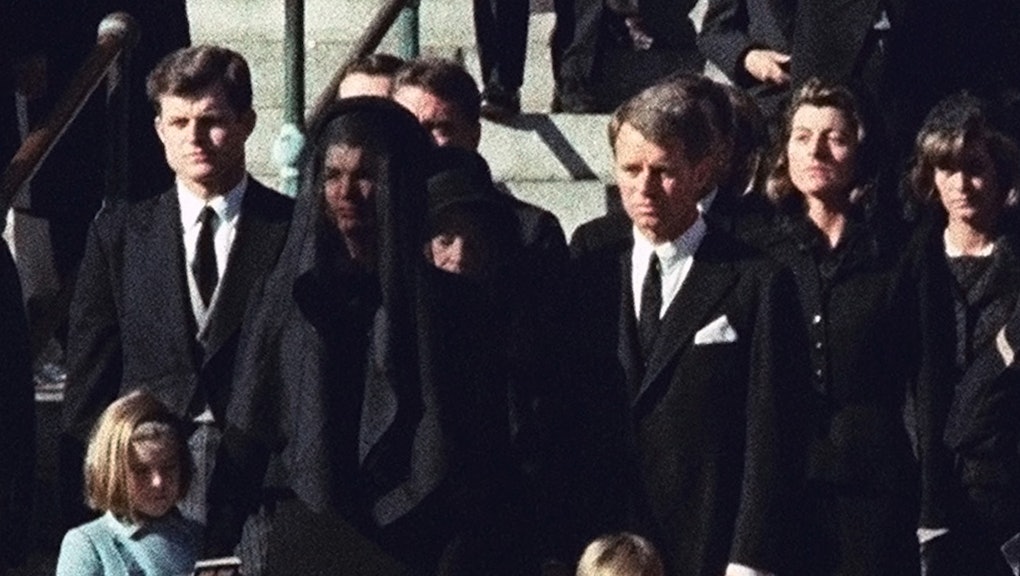 JFK's Legacy Is a Messy Symphony, Rife With Unresolved Debates

President John F. Kennedy’s mythical “thousand days” ended 9,134 days before my first one began. I arrived in Washington, D.C. — “a city of Northern charm and Southern efficiency,” in Kennedy’s spot-on estimation—shortly after the death of Senator Ted Kennedy and the retirement from Congress of his son, Rhode Island Representative Patrick J. Kennedy, left the country without a Kennedy serving in elected office for the first time since 1947. The only Camelot I’ve known is a strip joint down the block from my office (perhaps, given the steady, decades-long drip about JFK’s womanizing, altogether too apt a monument).

And yet, it doesn’t feel far away at all.

Every afternoon, around 2:00 or 3:00pm, a Google Alert arrives in my inbox — a digital remnant of one intense year immersed in my senior thesis during college. Set to inform me whenever the words “John F. Kennedy” cropped up online while I was studying his Senate years, I had fully intended to eliminate the alert the day I handed in my final paper. Only, for some reason, I didn’t.

So on any given day, I’m presented with the full, unfiltered cacophony of Kennedy in America today, alternately inspiring, troubling — and, occasionally, flat-out amusing. There are the expected conspiracy theories, sourced to obscure blogs in far-flung corners of the Web and promising tawdry truths. On September 26, 2013, New York’s John F. Kennedy International Airport finished installing new lighting; on October 26th, a Tennessee man attempted to bring four guns onto a flight originating there.

More often, Google brings the names of winning high school teams (“No. 4 Glenville football rolls over Cleveland John F. Kennedy in Senate League matchup”); news items about Caroline Kennedy’s nomination to be the U.S. ambassador to Japan (“Caroline Kennedy: Humbled to carry father’s legacy”); and, for a brief, breathless spell, tabloids chronicling the whirlwind romance of Taylor Swift, America’s Sweetheart, with not one but two Kennedy cousins (ask not whether they are ever, ever getting back together). As the third week in November looms closer, the tsunami of remembrances and reflections on Kennedy’s legacy unsurprisingly grows.

What the search algorithms reveal is, in its own way, that legacy. It is a messy symphony, rife with unresolved debates, each side marshaling Kennedy’s words as weapons; schools that stand as monuments to a fallen leader, even as the man himself, a black-and-white blur in a History Channel documentary, recedes further and further from the schoolchildren inside; members of the family, continuing to bear the burdens of public service — or else shouldering other, more tragic, ones.

The research I conducted in college, exploring Kennedy’s use of an obscure Senate committee to advance his career, showcased a young man on the make, in the most literal sense of the term. He was barely 40 years old, ambitious and inquisitive, probing experts and intellectuals for insight into political greatness. That he was still searching for himself when Oswald’s bullets found him is part of the reason we continue to search now that he’s gone.

In the final analysis, as Kennedy liked to say, there has been no final analysis — not even in the history textbooks. There is only controversy and flux, and the small things we do as Americans not to forget. Little wonder that when Jill Abramson recently surveyed the groaning shelves that have been written about Kennedy she lamented that “to explore the enormous literature is to be struck not by what’s there but by what’s missing.” The torch has been passed, but that doesn’t mean everything has been illuminated—or that we haven’t singed ourselves more often than not.

It is within that incompleteness that the next generation dwells, defining an icon’s meaning for ourselves. To some, Kennedy is a philandering fraud, Don Draper selling civil rights like soap. To others he is merely the Boston-inflected voiceover on an Internet trade association ad. And I was reminded, as I watched a young boy stumble over the name at the Kennedy gravesite last weekend, that some — the un-obsessed majority without historical Google Alerts — don’t know him at all. As I myself have come to “know” Kennedy, I’ve chosen to see him, as I believe many do, as he saw himself: an “idealist without illusions,” equal parts courageous and callow, a flawed embodiment of our aspirations as a nation.

We have a tendency, as Kennedy himself wryly noted, to imagine that “the halfbacks 30 years ago were faster, the girls were prettier, and the politicians, like Daniel Webster and John Calhoun and all the rest, were far abler.” But there is a grain of truth, even a large one, to our rosy recollections. Under Kennedy, we did launch a Peace Corps, ratcheted down the Strangelovian rhetoric, and decided to go to the moon, simply “because it was there.” We made a slow but not insignificant start on civil rights (and, less commonly remembered, mental health). America didn’t yet know what the “debt ceiling” was, nor did it need to. And while the struggle to eradicate Jim Crow did yield the Senate’s longest filibuster, it was at least rare enough to make the evening news.

There was, underlying it all, a welcome measure of nobility, bordering on giddiness, to public service. These days, the giddy all too often go west to Silicon Valley (full disclosure: my home) or, worse, east to Wall Street. This is hardly to say that the ideal of public service is not alive and well in countless NGOs and philanthropic foundations, miraculous social innovations, or public-private partnerships. Though he elevated the singular and essential role of our government, Kennedy certainly never suggested that “what we could do for our country” was confined to the halls of Congress or the Eisenhower Executive Office Building. But, more to the point, he asked—and the country, fitfully at times, responded and did the hard things. To a new generation of Americans, born in a century where there is an app for every problem but an appetite among its leaders to solve none of them, that is a captivating — and galvanizing — thought.

Fifty years after the fact, there is no getting around the ghastly reality. Kennedy the man is dead, and has been ever since an ashen Walter Cronkite broke into As the World Turns to announce that our own had stopped. And yet — as a very different alert chimes in my inbox — Kennedy still is, in so many ways large and small, alive.