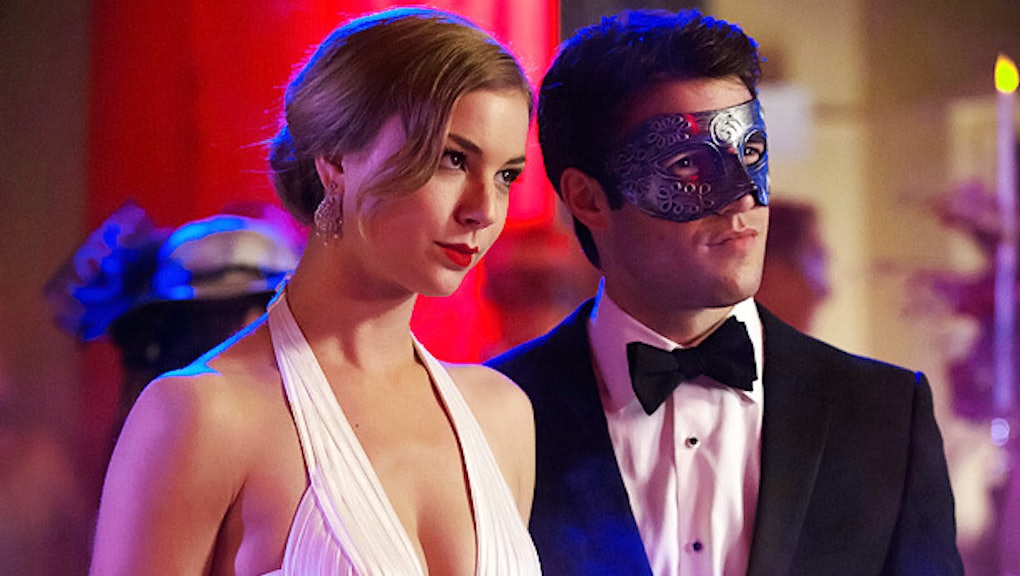 We can all agree that we millennials take up more than our fair share of the cultural pie chart, can't we? We're on the covers of major magazines, on stage at TED, in books, peppered throughout the culture section of the New York Times. We're on the web — boy, are we on the web. And now, thanks to shows like Girls, we're all over TV, too — right? Few shows, after all, have drawn as much critical attention as that now infamous HBO series about four young white women living in New York City. It has its detractors, it has its lionizers, but, between them, there persists a general sense that the show is a jewel of 21st-century American entertainment, one of wildfire catchiness and cultural heft.

Except that, in the ratings game, Girls is a featherweight. As Adam Sternbergh noted in his essay on popularity in the New York Times Magazine, "[Girls] draws a paltry 615,000 viewers a week but sometimes feels as if it has generated as many essays. By one measure, no one watches [Girls]. By another, it's fantastically popular." When the most watched show in America is Dancing with the Stars, followed closely by NCIS, the metric of sheer viewer headcount might not mean anything, or at least not anything good. But the fact remains that the millennial generation can claim as its own precisely one reputable TV series, and it's one that happens to be, by TV Guide standards, obscure.

Look to the shows that dominate in the ratings — and thus hold dominion over the American cultural imagination — and you'll see unsettlingly little in the way of millennial characters. Twenty-somethings may count themselves among the millions who tune in to Modern Family, or American Horror Story, or Revenge; I certainly do. But these shows are not for us; they speak a language and serve a meaning-making machine that excludes our generation. I want to look at a few popular TV shows that make a point to skim, if not skip altogether, the millennial question, and consequently ask what it might mean that mainstream TV, which for half a century has served as the hearth of American culture, finds it so difficult to write us into its scripts.

Modern Family positions itself as a plucky 21st century remix of the standard nuclear family sitcom, a Leave it to Beaver with tittering gays and voluptuous wives from Colombia. It's programmatically interested in bursting bubbles, in rewriting traditional narratives about marriage and family. For all its forwardness, though, the show conducts most of its race-, sexuality-, and gender-oriented experiments within disappointingly traditional age constructs. The characters are either in their prime-to-late parenting years, or they're adolescents and teenagers. Until the character of Haley graduates and goes to college (only to return home in less than a year), the show barely touches any person that exists between these two age blocks. And, as Haley has grown into her 20s, her screen time has gone down significantly, as though her character has less and less of a role to play in the show's active symbolic operation.

American Horror Story: Murder House is another show that updates the trope of the nuclear family, albeit with wildly different techniques. Its generous use of camp and gore make it an arguably hipper show than Modern Family, but, where millennials are concerned, it makes all the same glaring omissions. In a cast rife with outcasts and marginalized figures, I count only one true millennial, Hayden (Kate Mara), a former lover of the husband who tries to wreck his marriage, fails, dies, and then after-lives on as a nymphomaniacal ghost. She is, no doubt, a major character, and Mara plays her brilliantly; but ultimately she's excluded from the central emotional arc of the show, which hews to two central families (one led by Connie Britton, the other by Jessica Lange) that are, as in Modern Family, peopled exclusively by adults and teens.

A counterexample to shows like Modern Family and American Horror Story, which revolve around families comprised of middle-aged parents and teens and exclude millennials, is Revenge, the cast of which is made up almost entirely of people in their 20s, but which is set in a world that doesn't even remotely resemble the one in which real millennials live and suffer. The show takes places in a candy Hamptons, where candy people — the majority of them billionaires — plot against each other, throw big parties, brood on verandas and, occasionally, do karate. The major millennial characters — "Emily Thorne," Daniel Grayson, Nolan Ross, and Charlotte Grayson — deal with #20somethingproblems familiar to millennials audiences: singledom, online dating, choosing a career, stalking and being stalked on the interwebs — but only within the suffocating (and safe-feeling) gloss of the show's fantasy-work. Thus far, Revenge has deigned to represent only three millennial characters that are not insulated from the pitfalls of young adulthood by massive wealth: Jack Porter, "Amanda Clarke," and Ashley Davenport. Of those, one has been exiled from the show, and another has been killed off.

I don't pretend that Modern Family, American Horror Story, and Revenge can stand in for the corpus of mainstream American TV. But, a show like Girls wouldn't make such a splash if millennials were being depicted frequently and accurately elsewhere; and the omissions and cartoonizations of 20-something's characters in these specific series make useful examples of a larger representational crisis at work in television. What are missing from shows like Modern Family and American Horror Story, or are obfuscated in shows like Revenge, are not necessarily millennial persons themselves, but rather the central discomforts and awkward narratives intrinsic to young adulthood. The poverty, the identity anxiety, the sexual confusion, the depression, and isolation: These are, for better or worse, the trappings of the 20-something experience. Leaving millennial characters out of a show entirely is one way of prettifying this reality; making them rich as sultans is another.

Middle-aged parents, teenagers, and adolescents all lay within TV's representational comfort zone because they're chronologically in front of or behind this span of existential weirdness. Children are financially carefree and too young to have had their senses of identity rent; middle-aged adults tend to be more financially stable and have, at least to some degree, moved beyond this period of self-exploration and rebellion. Liberated from these concerns, children and adults become available to television's comedic, fantastic narratives. In turn, television, by excluding 20-somethings from those narratives, manufactures popular mythologies and structures of meaning in which millennials play no part.

Girls is not the only show that creates meaning for millennials. Netflix's House of Cards features one of the most dynamic and realistic 20-something characters on TV (played, again, by millennial ambassador to television Kate Mara). But, the examples are disappointingly few. Television is a meaning-making machine, and, even in the digital age, it's an important one. In the emotional narratives they choose to construct and the characters they choose to represent, TV shows help us to decide what and who in our life matters, what's meaningful and real and what isn't. The conclusion to be instinctively drawn from the underrepresentation of millennials on TV is: we don't matter, we're not real, and we're not a part of the American narrative. It's in this context that a show like Girls becomes, for all its missteps, a crucial artifact of American culture. But it's just the beginning of a conversation we all need to have about millennials, storytelling, and American TV.