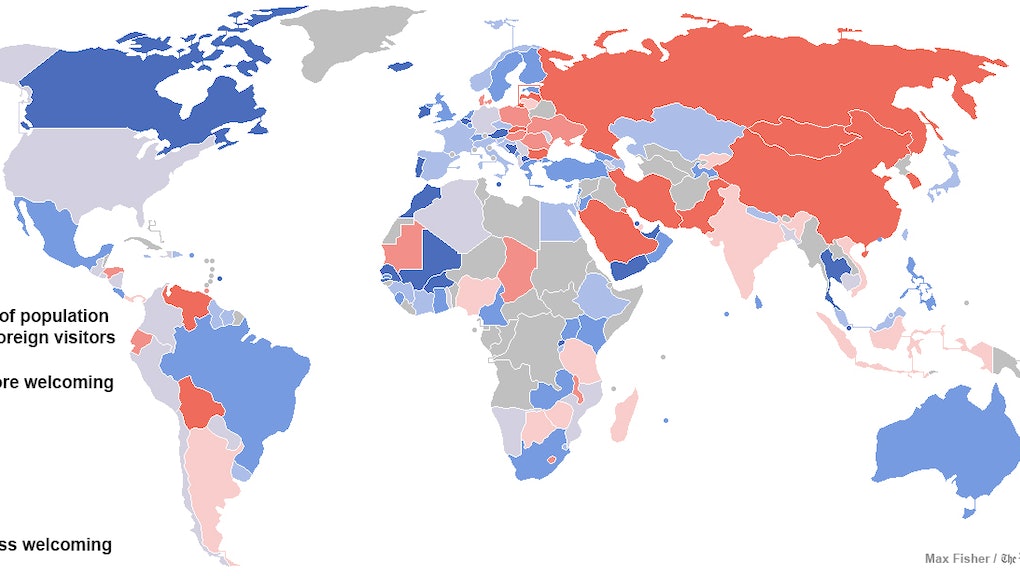 This Map Shows How Welcoming the U.S. Is to Foreigners, Compared to the World

The friendliest countries in the world toward foreign visitors are Iceland, New Zealand, and Morocco ... and the U.S. ranks really, really low.

From the World Economic Forum's (WEF) "Travel and Tourism Competitiveness Report 2013," we now have the raw data, assembled into convenient map format by Max Fischer of the Washington Post. Red countries are the least welcoming towards foreigners, while blue countries are the most friendly. Strewn throughout the data are some interesting surprises.

The WEF assembled the raw data through extensive surveys in late 2011 to late 2012 with the question "How welcome are foreign visitors in your country?" The hopes are that the results help analysts "measure the extent to which a country and society are open to tourism and foreign visitors."

Where does the U.S. come in? Pretty low, actually. The U.S., which as the Washington Post noted is supposedly the land of "give us your tired, your poor, your huddled masses yearning to breathe free," came in at 102nd place, "well below much of the Middle East."

Least welcoming countries were Bolivia, Venezuela, and somewhat unsurprisingly, Russia. Other unfriendly places included China, Bulgaria, Iran, Saudi Arabia, and Romania. South Korea came in very low-ranked as well, at 129. One wonders how its cousins to the north feel.

The catch? Don't let the map make you think the world is brimming with pitchforks. For one, the results of the survey were ranked on a scale of 1 (very unwelcome) to 7 (very welcome), with the top 138 countries all ranking at 5 or higher, with the top 125 scoring 5.7 or higher. Just Venezuela and Bolivia, coming in at 4.5 and 4.1 respectively, ranked lower than 5 on the scale.

And depending on where you travel within a country, people are likely to be more or less welcoming depending on whether you're in an urban or rural area, the local economic conditions, and how stable the political environment is.

Moreover, whether or not a visitor is generally welcome in a country probably depends as much on their nationality and the specific nation in question as much as the population's general attitude towards outsiders. Americans and Israelis, for example, might find themselves significantly more unwelcome in areas with a history of strained relations.