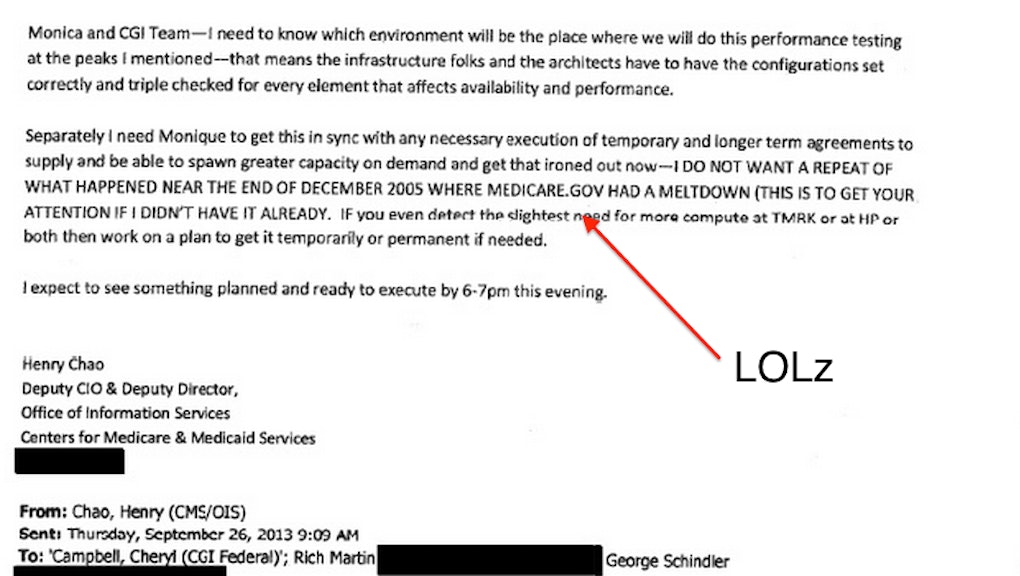 This ALL CAPS EMAIL Warned That Healthcare.gov Would Fail — 4 Days Before It Did

The background: On September 27, Henry Chao, the deputy chief information officer of the Center for Medicare and Medicaid Services, attempted to solve the site's problems by delivering an admonition that reads, "I DO NOT WANT A REPEAT OF WHAT HAPPENED NEAR THE END OF DECEMBER 2005 WHERE MEDICARE.GOV HAD A MELTDOWN (THIS IS TO GET YOUR ATTENTION IF I DIDN'T HAVE IT ALREADY)."

Unfortunately, Chao's use of all-caps failed to solve the site's issues, though his strong words did have a certain Cassandra-like quality. In its first day, Healthcare.gov received, "five times more users than had ever been on the Medicare.gov site at one time," according to the Chicago Tribune.

While developers bumped the site's bandwidth and attempted to address the threat of denial-of-service attacks, such measures were insufficient to cope with Healthcare.gov's inherent flaws. To his credit, David J. Nelson, who directs the Office for Information Services at the Centers for Medicare and Medicaid Services, seemed to understand that tacking on more servers couldn't solve the problem. Nelson stated that, "adding capacity to address bottlenecks … will likely be ineffective." One email pegs "load balancing, inefficient and defective code, and inefficient queries" as the site's core problems. Despite the clear software flaws, site contractors CGI and QSSI have gone out of their way to deflect blame for the problems.

The bigger picture: The panicked emails, released on Thursday by the House Energy and Commerce Committee as investigations into the Healthcare.gov's failure continue, highlight the federal mismanagement of the site's launch, and raise questions about why the site's massive performance issues and poor planning were not addressed far earlier — or, failing that, why the launch wasn't pushed back.

Notably, none of the emails released have a time stamp that falls far outside of normal business hours, pointing to the fact that while developers at entirely inconsequential iPhone app startups often work long hours on deadline, the officials working on the centerpiece of the Affordable Care act may not have been laboring around the clock to solve the site's fatal flaws.

Healthcare.gov is infamous for enrolling only six users on its first day, despite receiving 4.7 million visits, a rate that's ridiculously shy of the administration's stated goal of signing up 80% of the site's visitors. (Yep. Even at its best, the revamped site is expected to dissuade 20% of its users from enrolling.)

The Obama administration has pledged to render the site functional by the end of November, a deadline that's nigh upon us. However, hopes aren't exactly running high. According to one official, Healthcare.gov still falters at half of its planned capacity of 50,000 concurrent users. Meanwhile, on Tuesday, Chao told a House subcommittee that 30-40% of the site still hasn't been built, including the payment system planned for October 1 that's now vaguely slated to "come online over time" — even though payments for January coverage will begin December 15.