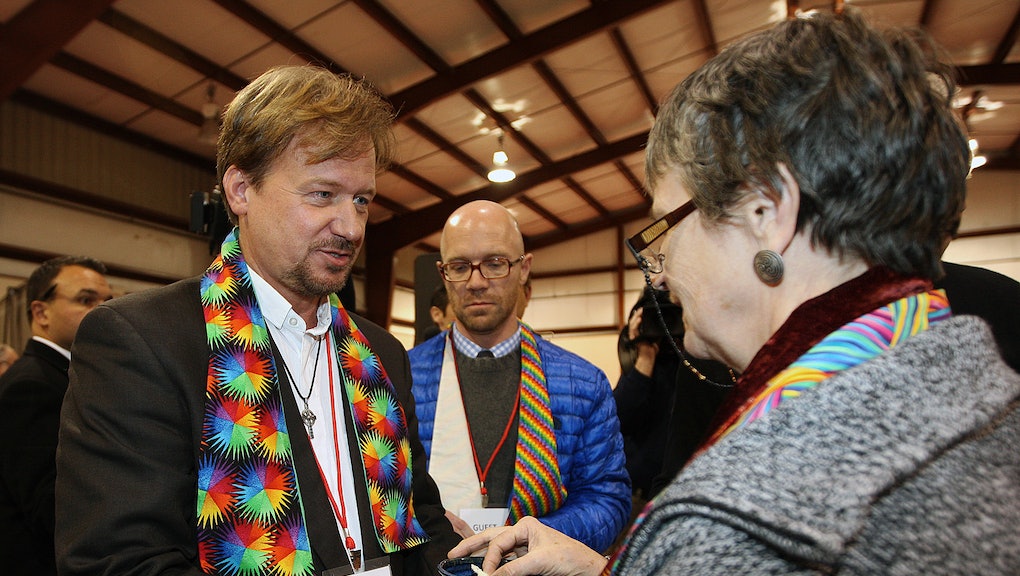 This Methodist Minister Was Punished For Officiating His Gay Son's Marriage

"Every night I prayed, begging God to make me normal. I pleaded with God to fix me. Many nights I cried myself to sleep," wrote Tim Schaefer in the Huffington Post. A minister's son, the United Methodist Church made him feel ashamed — that part of himself, his sexual orientation, was evil. Broken. But Tim Schaefer says love from his family saved him. Six years ago, Tim's father officiated his wedding.

Last week in a church trial, Tim's father, Reverend Frank Schaefer was given a 30-day suspension for officiating his son's same-sex marriage. Schaefer disobeyed the United Methodist Church's Book of Discipline — a guidebook that lists chargeable offenses, including officiating same-sex weddings. Schaefer was told he will have to relinquish his credentials if he cannot commit to adhering to the rule book within those 30 days.

It's unlikely Schaefer will change his mind. According to the LA Times, two of Tim's siblings are also gay.

"It was really the ultimate kind of loving act of a father to choose supporting a son over the potential [of] risking his whole career," Tim Shaefer told reporters. His father's choice has rocked the church, highlighting a sad fight that has been going on for decades, one which has particular significance for young Americans.

More than one-third of Americans under 30 have no religious affiliation, according to the Pew Research Center. In 2011, the United Methodist Church lost over 71,000 members. In their book American Grace: How Religion Divides and Unites Us, Robert Putnam and David Campbell point out that religion and conservative politics became increasingly entangled from the '70s through the '90s, with abortion and gay rights emerging as salient culture wars. Today, many young Americans have come to view religion as "judgmental, homophobic, hypocritical and too political."

In many ways, I count myself among them. I was raised Methodist (even thought I'd become a minister myself one day) but when it became clear that "loving your neighbor" didn't necessarily extend to my gay friends, I got fed up and quit going to church.

Some congregants, like me, leave their faith; others join the growing ranks of other, more accepting places of worship. But there are groups working to make the United Methodist Church more accepting.

One such organization is the Reconciling Ministries Network, a movement within the United Methodist Church "to create full inclusion of all God's children regardless of their sexual orientation or gender identity." Their fight echoes the divisions the church has faced over slavery, women's rights, women's ordination, and segregation. Retired Methodist Bishop Melvin Talbert made headlines in October when he officiated a same-sex wedding, and drew parallels between the different social justice movements: "I came out of the civil rights struggle when Jim Crow Law was there ... And in that struggle we finally spoke to the law and said that law is illegal and we can in no longer in clear conscience obey."

I wanted to hear from a voice with a clear conscience, as I often did when I was a church-going believer, so I called Bob Myers, the Youth and Education Director at Chagrin Falls United Methodist Church. To me, he has always been a singular example of how faith can stir the courage of one's convictions, and how ministry and love mean fighting for acceptance.

Had I known more people like Bob, I may have stuck with church. Once, when asked point-blank in a job interview what he'd tell a young person who came out to him, he answered, "I would start with the fact that God is love, and you are a masterpiece and you were created by God."

He didn't get that job years ago, but Myers told me that things are changing, if slowly. In his own youth group today, homosexuality is not an issue, and exclusion is a non-starter. Says Myers, "If we continue to keep focusing on these rules and this rigidity, then I think the church is going to continue to be in decline."

There are signs that a shift is afoot, at least within American churches. Today, there are hundreds of inclusive Methodist churches and ministries. At the trial, Schaefer said the church "needs to stop judging people based on their sexual orientation … We have to stop treating them as second-class Christians." A rainbow stole and a silver crucifix hung over Schaefer's neck as he said that God is calling him to minister openly for gay equality.

In a month, the United Methodist Church will likely revoke Schaefer's credentials. "I cannot go back to being a silent supporter," Schaefer said at his trial. Told by the church jury that he must commit to upholding the Book of Discipline in its entirety, Schaefer refused to promise to quit officiating at same-sex weddings.

The trial and sentence are a message to believers — but one that, instead of stamping down the movement for equality within the church, may set it alight.

In the days since Schaefer's trial, there has been a groundswell of voices calling for tolerance within the church. In solidarity with Schaefer, more than 30 United Methodist ministers officiated at a single same-sex wedding in eastern Pennsylvania. Already more than 19,000 people have petitioned Bishop Peggy Johnson to stop putting ministers on trial for officiating same-sex marriages. Reconciling Ministries Network has been inundated by emails and phone calls from ministers saying Schaefer's trial has solidified their convictions — they will begin officiating same-sex marriages, too.

In a faith filled with stories about fathers and sons, it seems apt that a son prompted his father to be brave, to speak for those being silenced. In short, to love.