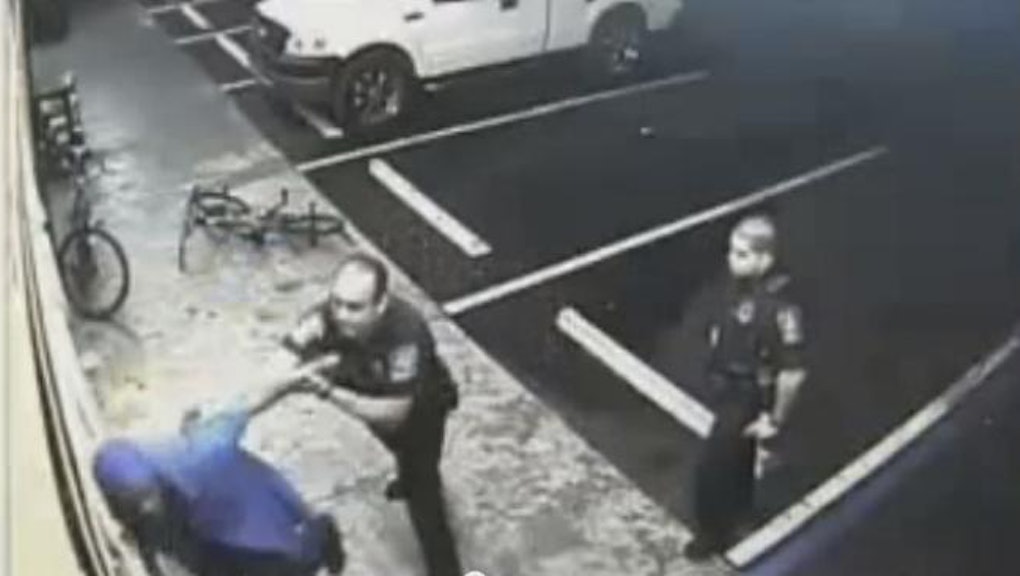 The news: On Friday, the Miami Herald ran a disturbing report that chronicles one man’s chronic encounters with police in the third-largest city in Miami-Dade county. Miami Gardens resident Earl Sampson has a 38-page rap sheet. He’s been questioned by police 258 times since 2009, and has been arrested for trespassing more than 60 times.

That may seem damning, until you learn that most of those trespassing arrests took place in an area that Sampson was actually supposed to be: the convenience store where he works. And though most of the charges against Sampson have been dropped, the arrests didn't let up until Sampson's employer, Alex Saleh, told the police department that he intends to sue over the intimidation of his customers and workers.

Saleh installed four security cameras just to document the cops’ outrageous harassment. The resulting videos capture Sampson being arrested while taking out the store’s trash, and again while restocking a cooler. Police can also be seen rifling through the store’s backroom without permission, and handcuffing, and taking away a customer.

Why it went viral: After the Miami Herald released their report, the story spread across social media. Many are equating the Miami incident to New York City's own controversial stop and frisk policy, which has long been criticized as nothing more than racial profiling. This story only adds fuel to the fire of critics who say harsh policing tactics are an affront to civil liberties and are more often than not racist.

The background: Miami Gardens has been plagued by shootings and murders. Crime is down overall since the city formed its own police force in 2007, but murders have doubled since last year. (It also happens to be the hometown of Trayvon Martin.) As part of their crusade against violence, the department has adopted a “zero-tolerance” approach to crime. The policy, popularized by the New York City Police Department and former New York City Mayor Rudolph Giuliani, involves cracking down on even minor infractions in an attempt to restore the rule of law.

Critics of zero-tolerance policing suggest that the policy is backed up by little evidence, and often results in racial profiling that drives a wedge between police and their communities. The policy can also cause a surge in un-prosecutable arrests that overburdens jails and justice systems. Proponents counter that zero-tolerance policing and “broken windows” policies are correlated with New York City’s astonishing drop in crime throughout the 1990s, as well as subsequent successes in other areas of the country.

According to the Herald, 207 Quickstop, the store where Sampson works, previously participated in a zero-tolerance program that permitted police to stop and question people on the store grounds. Store owner Saleh withdrew from the program after becoming frustrated with police, who he describes as alienating his customers and taking away employees in the middle of their shifts. Saleh also states that he was intimidated by the police department’s Rapid Action Deployment squad after he made complaints to the department about officers’ behavior.

The takeaway: Rather than simply arguing back-and-forth over whether zero-tolerance policies are successful at combating crime, it’s past time that we assess the external costs associated with such policing as it’s currently implemented. While it’s not unreasonable to suggest that laws be enforced to the letter, too often, zero-tolerance police departments begin treating community members as enemies, rather than partners in restoring order.