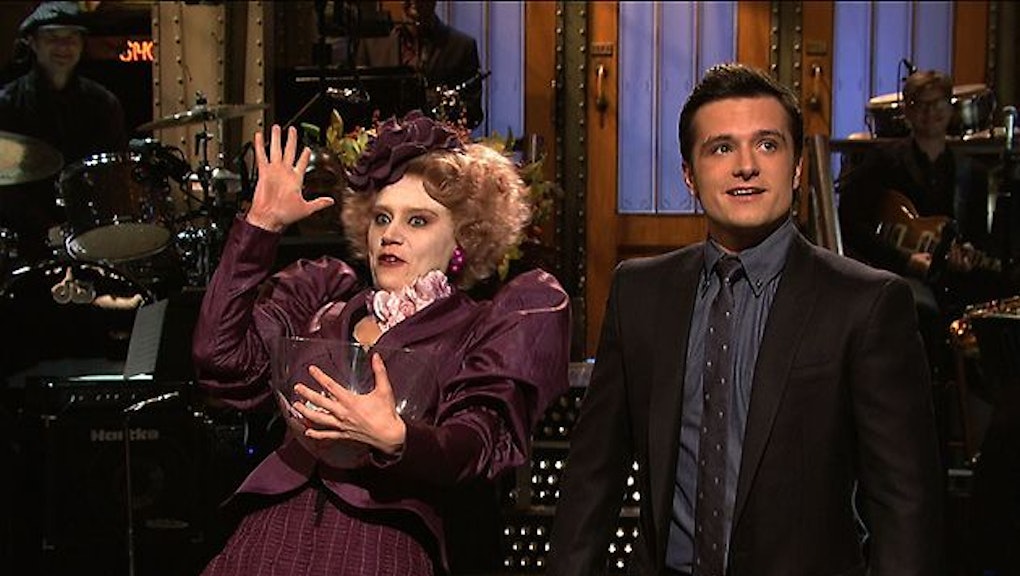 Josh Hutcherson SNL: The 5 Best Sketches Of the Night

Josh Hutcherson was the Saturday Night Live host this weekend. The episode seemed promising after a really fun opening monologue. However, while not unwatchable, it just wasn't particularly memorable — especially when compared to Gaga's performances a couple of weeks ago. Poor Hutcherson (though totally adorable) seems to be always in the shadow of stronger women.

Even with some slips there were also some gems, here are the five best sketches of the night:

I suppose they had to say something about George Zimmerman; choosing to interview George Zimmer was clever. This was an original way to take it on, if not hilarious.

Honestly, when they showed the words 'Matchbox 3'  at the top of this sketch, I was really, really hoping this would turn out to be about Matchbox 20. It was not, but it was still a cute concept. Again, more of a chuckle than a guffaw.

Essentially this a dance movie being acted out from start to middle, in five minutes, in some guy's living room. That being the case, it might've been nice to see it get a little wackier and finish the whole story line of a stereotypical dance movie. You know, the main guy gets some hard knocks and then the crew takes him back and the room gets dark, crowded, and moist and he wins a couple grand, which happens to be just enough to pay for his mother's surgery. Or whatever, I'm just spitballing here.

Usually I don't count these as sketches, but this one probably made me laugh as much as I did all night, so it's going in here.

5. Interviewing Bugs in a Rush

This one left more absurd questions than it gave absurd answers. That wasn't Lance Bass from *NSYNC, right? Why do they both look like Chuck Bass, from Gossip Girl? How did they get that one bug to talk? Anyway, this was the best sketch of the night.