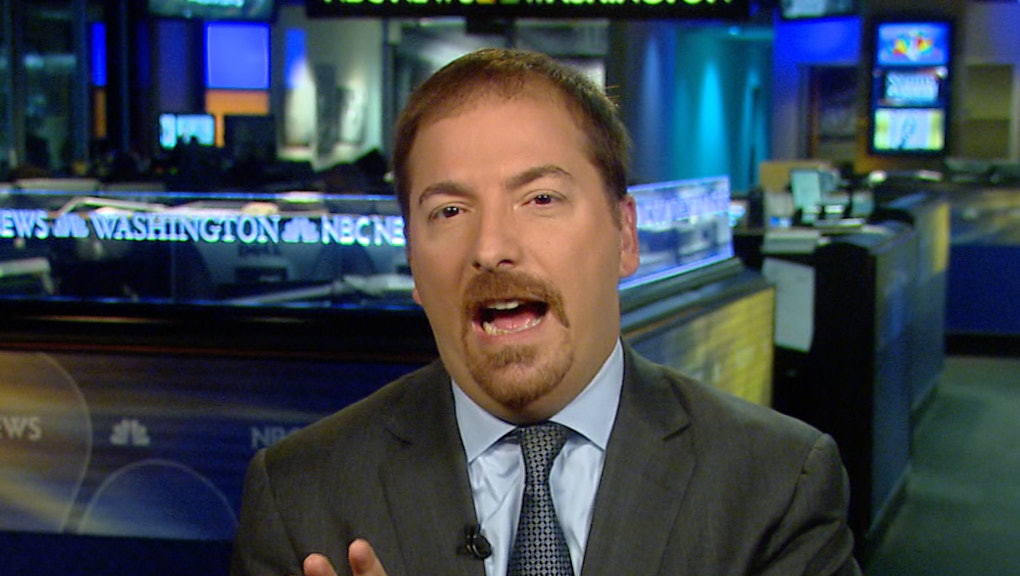 Chuck Todd Wants More Transparency From Obama, But Only Where It Matters Least

It has only taken five years, but finally the mainstream media is realizing that the Obama administration is not as transparent and open as it claims to be. Unfortunately, the media's recent outrage over superficial White House access reveals their hypocrisy and subservience when it comes to concrete issues of accountability and real government transparency.

Last week, Chief White House Correspondent for NBC News Chuck Todd, as well as many other journalists from prominent news outlets, signed a letter protesting White House limits on taking photos of the president. Todd is outraged, so outraged, at this authoritarian restriction that he compared the White House's treatment of journalists to Vladimir Putin's control over the press in Russia.

Todd raised his deep and principled concerns with White House Deputy Press Secretary Josh Earnest, who assured the press corps that working with them is a "priority" of the administration.

Comparing this administration to a former KGB kleptocrat over limited photographic access? So this is what it takes to get the media up in arms?

Leaving aside the fact that critics of the president who compare his policies to those of communist countries have been labeled domestic terrorists, anarchists, and other smears, the hypocrisy of the media's outrage is summed up perfectly by this clip of the very same Todd defending White House secrecy over the NSA scandals.

According to Todd, President Obama was "smart" and "strong" in his further implementation of the NSA surveillance programs and how the president defended them. All the talking points are hit: National defense! Terrorism! His fellow pundits dutifully agreed.

Why is there so little outrage from Todd and his fellow press corps over an actual, concrete issue of transparency? The NSA scandal revealed that the government is illegally spying on and gathering so much of Americans' private information that it even makes a former member of the East German Stasi blush.

The Obama administration lied repeatedly about the program, claiming that this surveillance prevented over 50 attacks. Okay, so maybe it only caught one cab driver sending money to Somalia, as they were finally forced to admit, but those are just the devilish details that real investigative journalism would reveal.

And to top it off, the Director of National Intelligence James Clapper lied under oath to Congress about the program. Sure, this happens to be a federal felony that would land any one of us in a cage, but these are sanctified government officials, whose high crimes and misdemeanors are little more than jokes and roasts at dinner parties.

All of these transparency and oversight concerns are insignificant according to Todd and co. What is important, however, is the belief that their dear leader — excuse me, the president — will come out looking tough.

While Todd and the rest of the White House stenographers are shocked to learn that the Obama administration hides itself behind a wall of secrecy and lies, real journalists got the memo a long time ago. All you have to do is watch any interview of Glenn Greenwald — the guy who helped break the NSA story with Edward Snowden — by the mainstream media to see this bias.

Rather than focus on the issues of a Big Brother surveillance state (that makes 1984 look like an instruction manual and not a warning) and then thoroughly debating the implications, Greenwald is barraged with questions over how much harm he is supposedly doing to "national security" and why he must hate freedom and democracy.

Here is just one example of the media's treatment of Greenwald in which he spars with MSNBC's Mika Brzezinski.

Greenwald, currently living in Brazil, has legitimate concerns for his safety for actually being a journalist. His partner, David Miranda, was even detained and questioned at a British airport for nine hours. Miranda was eventually released, but the British government confiscated his mobile phone, laptop, camera, memory sticks, DVDs and games consoles.

Greenwald has been nothing less than heroic in his defense of civil liberties and constitutional law, and it is not hyperbole when he claims that journalism is quickly becoming a crime in America. According to a recent report by PEN America — an organization of writers dedicated to advancing literature and promoting free speech for writers around the world — journalists in America are admitting to self-censoring themselves for fear of what might happen to them.

Journalism is not yet being treated as harshly as whistleblowing is, but give it time.

The NSA surveillance programs combined with the legal and extralegal means that top-level officials are using to criminalize and stifle journalism are the real ghosts of the Soviet Union and authoritarian regimes surfacing in America, not the restricted access of the press corps to photograph the president.

Perhaps I am being too hard on Todd and his cohorts. While actual journalists and whisteblowers face tremendous consequences to their reputations, career, income and even their lives for their heroic work, Todd does not have to worry. He has made a nice living defending government power and usurpations, and will likely continue to do so when President Christie or Clinton tightens the vice even further.

Meanwhile, Greenwald, Snowden, and so many others will continue to fight despite the odds and uphill battles that unfortunately are placed in front of them. And when the press corps whines that the president's golf swing can't be captured in high-defintion, just don't expect the rest of us to be too sympathetic.