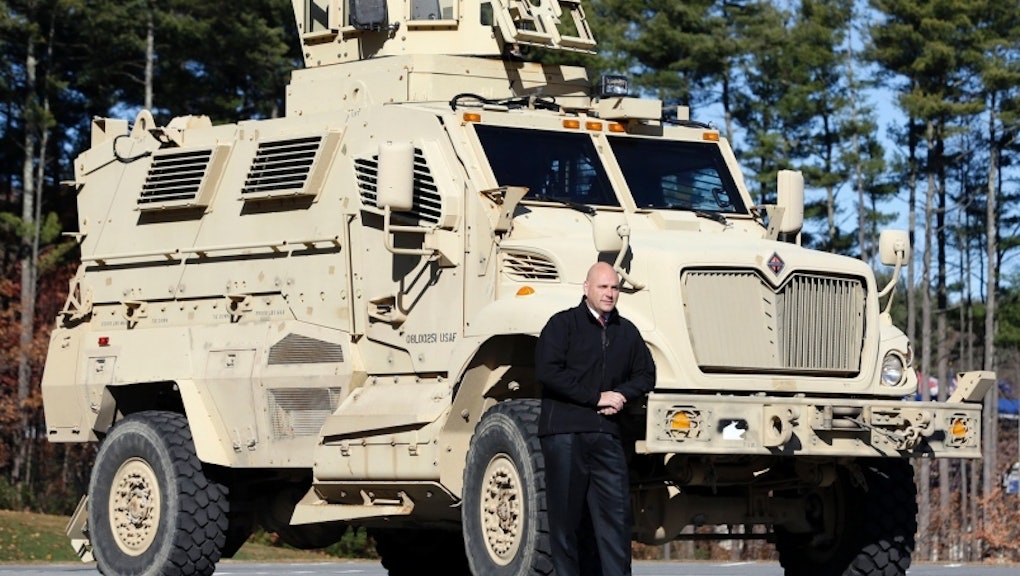 The news: An alarming number of military vehicles are rolling off the battlefields of Iraq and into the hands of your local police department. As the Associated Press reports 165 mine-resistant ambush-protected vehicles (MRAPS) designed to withstand sniper fire and survive improvised explosive devices while keeping the infantry inside alive have been handed out to police and sheriff's departments across the country since they became available this summer. The military to police handoff happened after the initiation of a Defense Department military surplus program.

According to Albany County Sheriff Craig Apple, head of one of the five county sheriffs and three other police departments receiving MRAPs in New York, "It's armored. It's heavy. It's intimidating. And it's free."

Should police be bringing Iraq into you suburbs? Critics including the American Civil Liberties Union (ACLU) argue that the trucks are simply too big for police work and serve mostly as a way for police to intimidate local citizens.

The trucks weigh 18 tons, get five miles to the gallon, crash through weak bridges and shatter some roads, and have a tendency to tip over — so much so that the military conducts special classes to train soldiers for a rollover situation.

The Associated Press found that a disproportionate number of the vehicles transferred to law enforcement control, as well as another $4.2 billion in supplies ranging from bayonets to combat vehicles, have ended up in rural sheriff's and police departments — often in locales with "few officers and little crime."

The High Springs, Florida, police department purchased a 24-ton, $600,000 MRAP from Camp Shelby in Mississippi on Oct. 4 for just $2,000. According to Police Chief Steve Holley, "If we have a situation that requires us to deploy people in hostile environments, we can use this vehicle … it's a cheap solution to a problem. If we need to evacuate people and they can't get out, we can start piling people in and then pull them out."

Gainesville Police Department spokesman Ben Tobias said in October that they were planning to acquire an MRAP to replace their aging SWAT vehicle.

"A $250,000 vehicle would be the normal replacement for our SWAT vehicle and we didn’t have $250,000 lying around … the military surplus program is quite a good deal for American law enforcement."

Police argue that the vehicles, while intimidating, also provide an impenetrable barrier against small arms fire and could protect officers against armed criminals.

Are we militarizing America? The Friends Committee on National Legislation argues that MRAPS, among other massive Defense Department giveaways, are contributing to the "militarization" of law enforcement in the United States. They point to the intimidating vehicles as just one of many tools of war freely given to cops, such as Georgia's Cobb County, which received an AR-15 rifle for every squad car, or Tupelo, Mississippi, which got a helicopter in need of $100,000 of upgrades and $20,000 a year in maintenance. And many of the weapons have been irresponsibly used in excessive force incidents or lost, either to departments selling the weapons or simply misplacing them.

They concluded: "Citizens deserve to know that their congressional leaders and law enforcement officers are working together to protect them — not recklessly engaging in a gluttonous arms race or irresponsibly losing dangerous weapons."