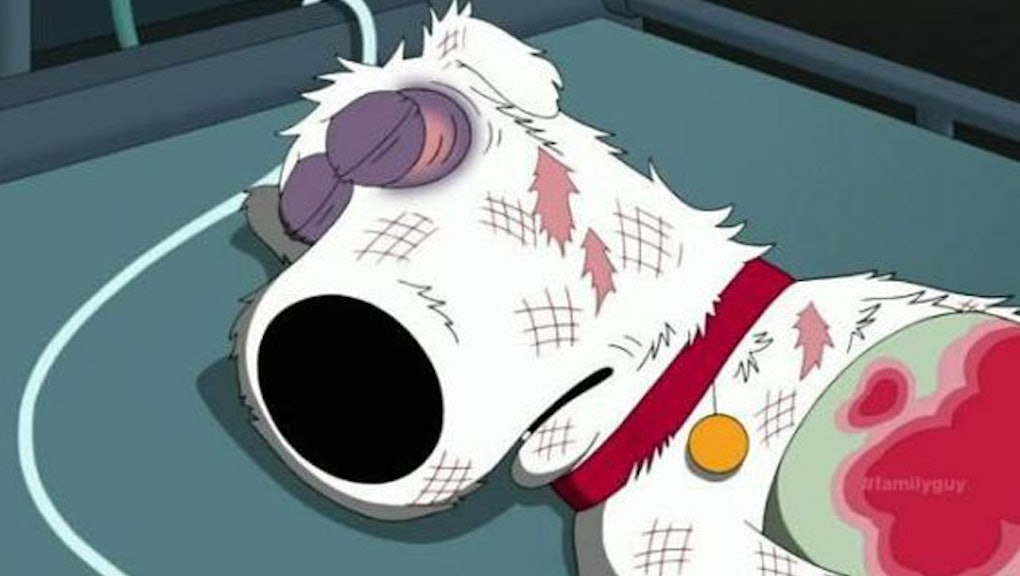 'Family Guy' Killed Brian, and Here's Why That Was Brilliant

For those of you who didn't catch last night's episode of Family Guy, stop reading now. Major spoilers follow.

For those of you who did watch, you were probably as surprised as I was to see the show kill off one of its main characters, Brian — the Griffin family's pretentious but tormented intellectual talking dog. The internet is abuzz with reactions to his death, with most of the reactions trending negative. Mila Kunis (voice of Meg Griffin) and Seth Green (voice of Chris Griffin) have expressed their surprise, while the hashtag #BringBackBrian is going viral on Twitter. While these reactions are certainly understandable, a strong case can be made for leaving him dead.

Say what you will about the long-term ramifications of killing off his character, but "Life of Brian" was a remarkably powerful and moving send-off. While it has many strengths as a television comedy, Family Guy has never been known for its poignance, with the narrative depth and character insight of animated sitcoms like The Simpsons, Futurama, and King of the Hill eluding it. "Life of Brian" was a welcome exception to that rule, with the Griffin family's teary goodbyes to their beloved pet proving especially touching. With Brian remaining dead, this will be remembered as a milestone episode in the series. Bring him back, and the episode — though still strongly written — will lose its resonance.

Indeed, one of the most admirable features of Family Guy is its willingness to be unabashedly bold with its characters. Although characters are frequently killed off in the name of surreal cutaway gags (which are never meant to be taken seriously as part of the story's canon), there have been plenty of major players in the show who have been taken out before — Peter's old boss Mr. Weed, Muriel Goldman, Dianne Simmons, Peter's stepfather Francis Griffin. While it may seem hard to swallow at first, Brian's death actually fits nicely into this enduring strength of the program. It would be unfortunate to retcon it.

Brian's death could also snap the show out of its current creative rut. Regardless of whether Vinny proves a suitable replacement for Brian (I'll withhold judgment until he's had a few episodes to get fleshed out), the stench of complacency has lingered over Family Guy for its last few seasons. When it first aired in 1999, it was a breath of fresh air, from the novelty of its non sequitur cutaway gags to its distinctly Generation X take on pop culture, politics, and the banal sitcom format that had been first skewered by The Simpsons. Over the last few years, however, Family Guy has almost gotten lazy. Gags that were hilarious the first time (Peter injuring his leg, the creepiness of Herbert the pedophile, the random crooning of Conway Twitty) have gotten grating. The stories themselves — which were never the show's greatest selling point in the first place — became even more transparent as excuses for random clusters of unrelated gags. With Brian out of the picture, the writers will be forced to shake up how they write their stories and construct their comedy. Sure it could prove disastrous, but at the very least it will be something new.

Of course, even as I write this, cyberspace is already full of rumors that Brian's coming back . I can't say that I won't miss him, but I applaud Family Guy's writers for taking such a bold risk. If the show is suffering from his absence a year from now, I may change my tune, but for now I'll go against the wave and say: Keep Brian Dead!