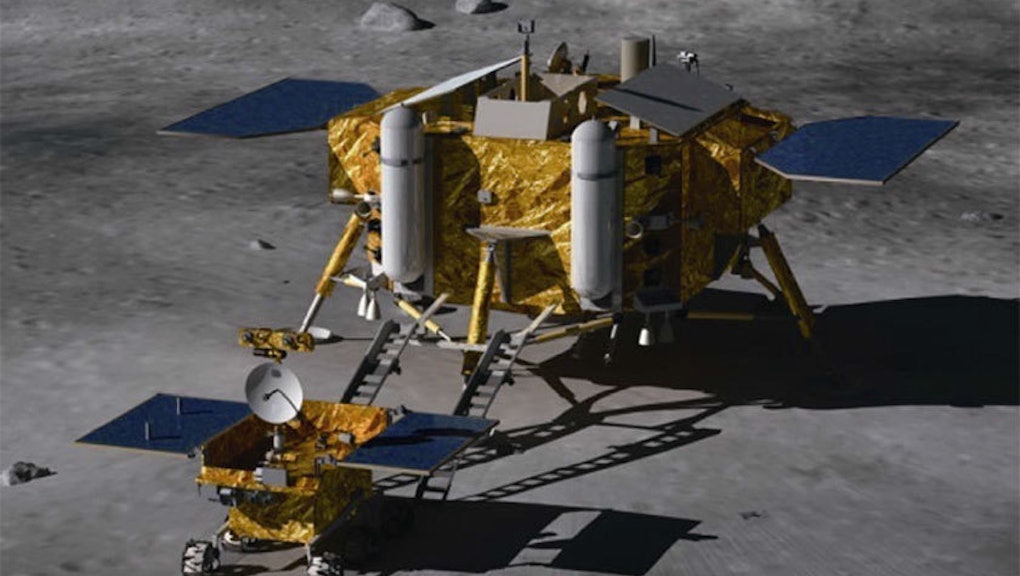 The news: China is in the "final stages" of preparation for its Chang'e 3 moon lander, which will lift off via a Long March 3B rocket in early December. The ambitious probe will orbit the moon before propelling down to the surface and unleashing a solar-powered moon rover to explore the lunar surface.

A Xinhua News poll to name the six-wheeled rover, which has four cameras and is capable of traversing obstacles on the surface, has "Seeking Dream" in the lead with more than 500,000 votes cast. It will roll across the surface for at least three months under the control of scientists from Earth.

Chang'e 3 will likely land on a piece of lunar territory called Sinus Iridum (seen below), near a fresh crater named Laplace A — which features a breathtaking 5,200 foot sheer drop that the rover may venture toward to photograph.

"No humans or robots have ever visited a fresh crater anywhere near this size on the moon — or Mars for that matter — so the return from this mission has great potential for advancing our knowledge of the moon," Mark Robinson of Arizona State University's School of Earth and Space Exploration told Fox News.

But there's a problem: NASA is already there, and fears that the Chinese mission could compromise its own. NASA's orbiting Lunar Atmosphere and Dust Environment Explorer (LADEE) is undergoing the final processes of instrument commissioning and adjustment, after which it will descend to lower lunar orbit and begin the science and observation phase of its mission.

According to John Hopkins University's Applied Physics Laboratory scientist Jeff Plescia, "The arrival of the Chang'e 3 spacecraft into lunar orbit and then its descent to the surface will result in a significant contamination of the lunar exosphere by the propellant."

This could ruin LADEE's measurements, as one of the core goals of the NASA mission is to establish a baseline evaluation of the moon's exosphere. Propellant could throw off its observations significantly.

But Plescia told Fox News there may be a silver lining.

"Propellant will be released at a relatively high altitude from burns as the Chang'e spacecraft enters lunar orbit and then at a range of altitudes as the spacecraft descends to the surface … LADEE will be able to observe how the propellant becomes distributed into the lunar exosphere and then how it is later removed."

And there's always the possibility that the two space agencies can agree to co-operate and co-ordinate their missions, but time is running out. According to Clive Neal of Notre Dame, NASA scientists are "not allowed to communicate bilaterally with their Chinese counterparts."