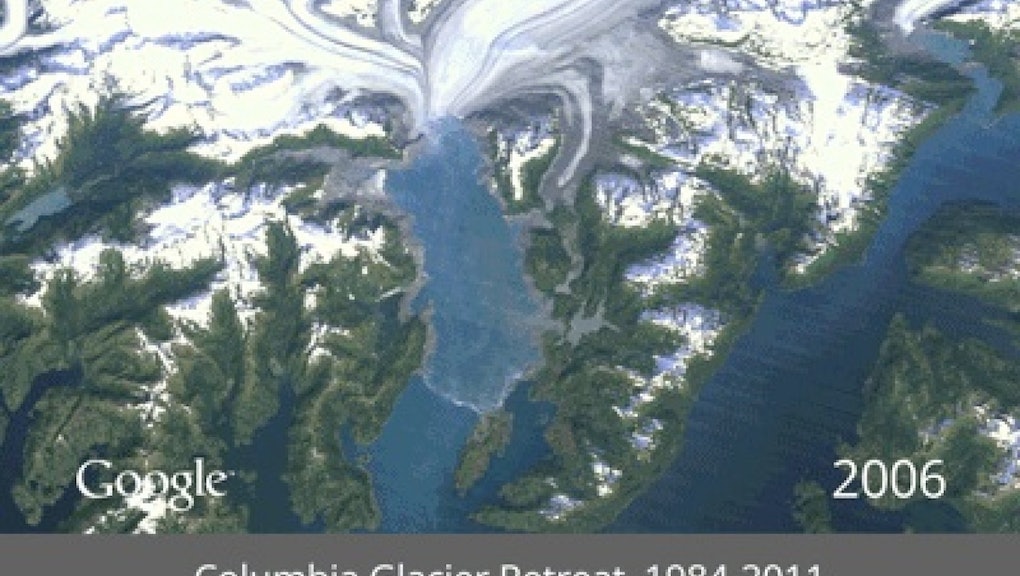 These stunning GIFs from Google's Timelapse project show the mankind's impact on the Earth in the past three decades in shocking detail.

And, as might be expected, the results are not so good.

From Google's official blog: "We believe this is the most comprehensive picture of our changing planet ever made available to the public ... We also hope it can inform the global community’s thinking about how we live on our planet and the policies that will guide us in the future."

According to a USA Today poll conducted earlier in November, at least 75% of U.S. adults believe climate change is real.

The Columbia glacier is a large, multi-branched glacier covering 425 square miles in southern Alaska stretching from the Chugach Mountains to Prince William Sound. Warming air temperatures have caused it to lose 2 cubic miles of ice in the form of icebergs each year, or more than the entire state consumes in fresh water. It is expected to stabilize at a position 15 miles north of its original position in the 1980s.

While known for its energy exports, Dubai, one of the seven emirates of the United Arab Emirates, has limited oil reserves. Sheikh Mohammed bin Rashid al Maktoum has decided that tourism is the emirate's best hope at long-term prosperity, and has commissioned an elaborate series of marine projects designed to build a sandy coastal waterfront. According to Port Technology:

From 1972 to 2010, Las Vegas grew from just under 300,000 to over 2 million, the surge in large part fueled by tourism, gambling, and air conditioning. See another time lapse here.

Nearby Lake Mead is expected to shrink 25 feet to a record low by November 2014.

The rate of deforestation in the Amazon grew a shocking 28% between August 2012 and July 2013 after many years of attempts to stall logging. This reversal came after a decade of success; Brazil had cut annual forest loss in half between 2003-04 and 2010-11.

During the time period of 2000-2012, the planet saw a net loss of 1.5 million square kilometers of forest, roughly the size of the entire nation of Mongolia.

According to AccuWeather, the 20% shrinkage of the Amazonian rainforest could have devastating impacts, including contributions to rising global temperatures and impacts on rainfall and wind patterns.

Lake Urmia, a salt lake in the northwest of Iran, is the third largest such body on earth with a surface area of 5,200 kilometers. It has lost 70% of its volume since 1994, giving it its worst conditions for the past half-century.

According to Treehugger's Jennifer Hattam, the lake is now believed to be saltier than the Dead Sea, and many Iranians fear that the water will go the way of the Aral Sea, which disappeared after Soviet-era irrigation systems drained it of water. 70% of flamingos and waterfowl in the area have vanished, and 13 million people could be displaced if the lake disappears entirely.

Saudi Arabia's irrigation system is "the very definition of unsustainable," writes Grist's Christopher Mims. Two-thirds of the country's water is imported, and when the sheikhs run out of so-called fossil water drilled from under the desert to contribute to irrigation, the country will be even more reliant on imports.

NASA photos provided below show the staggering change in the Syrian Desert, where wheat and other crops have sprung up over the past 24 years:

Coal mined on northeastern Wyoming and southeast Montana's Powder River Basin comprises nearly half of American coal, some 400 million tons a year. When it's burned, it accounts for 13% of of U.S. greenhouse gas emissions, the single largest contributor to climate change in the U.S.

According to The Nation: "At most, 4% of the land ruined by mining in Wyoming has been reclaimed."