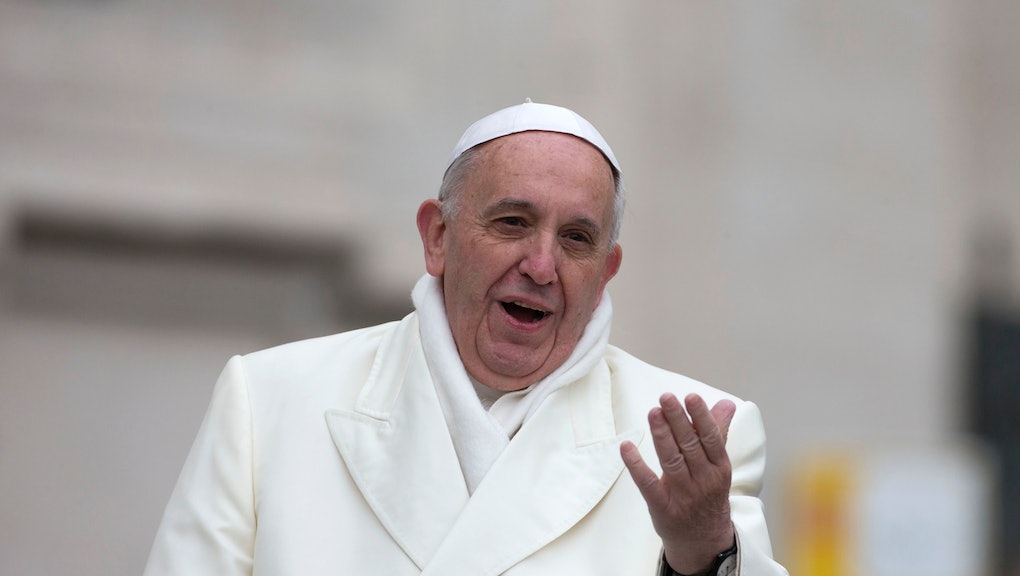 Pope Francis Rails Against the Religion Of Capitalism

The Catholic Church went viral for the first time in its long history this week. Pope Francis published an apostolic exhortation on Tuesday, an 84-page missive on the state of the world. Continuing in the vein of his headline-grabbing papacy thus far, the new Pope displayed a markedly anti-capitalist bent that alerted a generation of socially aware but religiously indifferent people to the Church’s renewed interest in promoting equality.

Though the manifesto’s emphasis on social justice falls comfortably within traditional doctrine — the Church did happen to be founded by a guy with a thing or two to say about helping the poor — the Pope’s condemnation of not only inequality, but more importantly the very ethics of capitalism, actually represents a slightly less obvious reorientation of the Church’s role in society.

Most of the Catholic Church’s history has been that of a wildly successful political machine. As with any such institution, money was never far behind. The gilt adorning St. Peter’s Basilica — or the $7 billion currently in the Vatican bank — readily contrasts the Pope’s strong words about capitalism with his Church’s history of very much succeeding with the “economics of exclusion.”

But for the past few centuries, things have been changing. Whereas the powerful banking, military, and cultural institutions of the Western world had previously leveraged the Church to accomplish their agendas (imperialism comes to mind), the introduction of economic theory during the Enlightenment suddenly offered people a more direct excuse for expanding enterprises and accumulating money. Power structures — especially governments — gradually swapped the pursuit of heaven with the pursuit of wealth as the basis of their ethical systems, and the larger society followed. Pope Francis’s decision to take his formerly powerful Church in a decidedly non-powerful direction — helping the helpless — is a concession to that change.

In the document, Francis criticizes the results, if not the utopian goals, of unrestrained capitalism. In doing so, he seems to acknowledge the specter as something of equal stature to his own Catholicism — equal and opposite, that is. He regards our consumerist culture not as the product of poor discipline and weak morality, but, correctly and perceptively, as a self-contained system of ethics unto itself.

"Today everything comes under the laws of competition and the survival of the fittest, where the powerful feed upon the powerless,” he laments. “As a consequence, masses of people find themselves excluded and marginalized: without work, without possibilities, without any means of escape. It is no longer simply about exploitation and oppression, but something new."

Francis hints at this new thing in a section titled, “No to the new idolatry of money.” In it, he describes a growing religiosity that has sprung up around the central tenets of capitalism.

“They reject the right of states, charged with vigilance for the common good, to exercise any form of control,” he wrote. “A new tyranny is thus born, invisible and often virtual, which unilaterally and relentlessly imposes its own laws and rules… In this system, which tends to devour everything which stands in the way of increased profits, whatever is fragile, like the environment, is defenseless before the interests of a deified market, which become the only rule.”

This is interesting: a “deified market.” As presented here and elsewhere in the document, this religious terminology comes off as a withering but entirely appropriate aspersion, cast by the Pope, on the radical right's devotion to laissez-faire economics. It denigrates the political philosophy of the market — espoused in philosophies such as libertarianism, Objectivism, and anarcho-capitalism — to the level of a common superstition like any other. It says, Rail against your imagined devils as much as you want—Keynesianism, regulation, taxes — your gospel and your proof is as imagined as any religion's.

"Some people…assume that economic growth, encouraged by a free market, will inevitably succeed in bringing about greater justice and inclusiveness in the world. This opinion, which has never been confirmed by the facts, expresses a crude and naïve trust in the goodness of those wielding economic power and in the sacralized workings of the prevailing economic system.” The “sacralized workings” of the market! The irony is that the critic offering this insult is the world’s largest single purveyor of sacralized superstition, but the point stands.

By taking on capitalism and its most pious adherents, Pope Francis hasn’t so much written a leftist tract as provoked an interesting confrontation with the ethical system that has supplanted his Church’s influence in our world. The Beatitudes have never harmonized with the ethics of profit maximization, but until Tuesday, they had also never been as starkly contrasted.