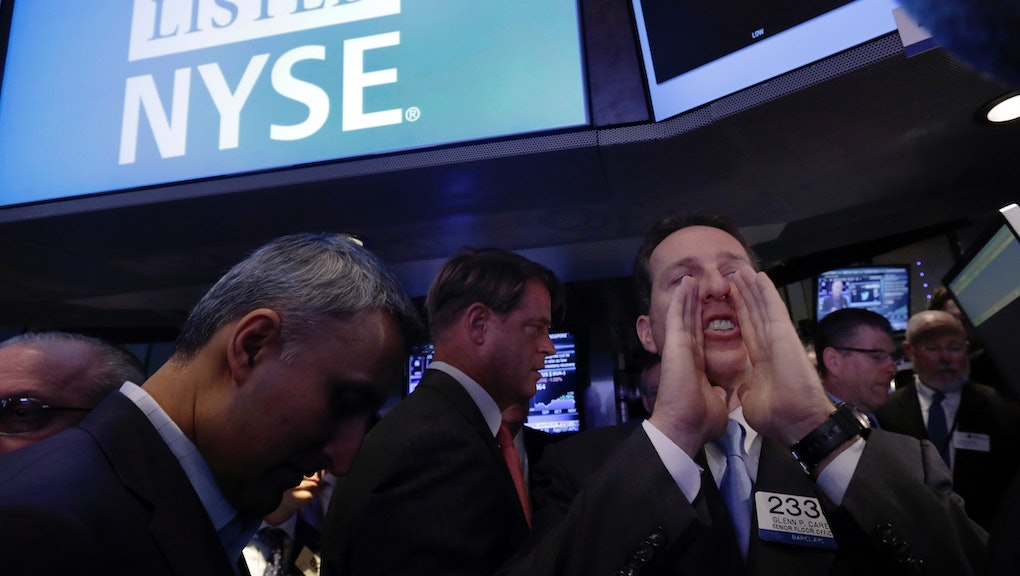 With Snapchat's rejecting Facebook's $3 billion buyout offer based on hypothetical revenue, Twitter's ballsy IPO, and the NASDAQ crossing the 4000-point threshold for the first time since the dotcom boom, prognosticators everywhere are paranoid about a new tech bubble. While it's natural to be wary and try to find flaws in market behavior and prepare for doomsday scenarios, the bubble fears are unwarranted in today's tech world. While there will certainly be some companies going bust and therefore some investors losing money, but overly simplistic comparisons to past bubbles neglect key differences between then and now.

For starters, what exactly are "market bubbles?" They're more like balloons: they pop from the interior pressure of over-expansion, rather than an exterior prick. Think of share prices in an industry as the volume of air in the balloon, and of investor overconfidence as the pump. Eventually, the market's latex membrane can't support the strain. While an exhaustive overview of past economic bubbles would be ideal, a direct comparison to the dotcom boom is most useful here. As Forbes points out, we're talking about another equity bubble here, not a debt bubble (e.g. the mortgage crisis of 2007-2008).

The same article offers some relevant data: "In January 2000, the S&P 500 [Price]/[Earnings] ratio ... was 29, now it's 19.8," which means the market as a whole is not as "overvalued" as it was then. The paranoia is largely a result of a few striking anomalies. You already know the old stories about Facebook, Twitter, Snapchat, and LinkedIn being "overvalued" before you even read the headlines, but four companies don't make a bubble. The fate of average Americans also isn't as closely tied to the fate of these few stocks, because we're witnessing the "slow death of ... stock-market investing as a do-it-yourself enterprise," and equity funds are focusing internationally, not on tech. More evidence? The year 2013 will end with about 30 tech IPOs, compared to 308 in 1999, and private venture capitalists in Silicon Valley losing money shouldn't really be a public concern.

Internet-based stocks are neither as speculative nor related to each other as they used to be. The dotcom boom combined the correct belief that the internet was the future and the incorrect belief that everything related to the internet (i.e. at the time, anything ending in ".com") was de facto valuable. The modern equivalent would be Snapchat being valued this highly solely because it's a social media app. Call Snapchat-bulls delusional all you want, but a user base this huge and this active is a big, fat, empirical data point and not a pure hypothetical.

Even if Snapchat does go public and tanks, there are huge differences between it and, say, Google. Tech stocks relying on "the internet" are far more varied than a bunch of Web 1.0 HTML addresses circa 1999. If you buy Google, you're not just investing in its ad revenue, but in its insane R&D that produces Glass, robot cars, and lightning-fast internet infrastructure. If you buy Snapchat, you're investing in the prospective value of a giant pool of behavioral data (sidenote: a company-specific critique of Snapchat's data deletion is completely valid). The ripple effect connecting the two is just not that strong.

Yes, some tech companies will go broke, so some investors will lose money. However, other internet-driven companies, though, with distinct business models and more eyeballs than most countries, will become absurdly profitable as our "real lives" become more and more saturated by technology.