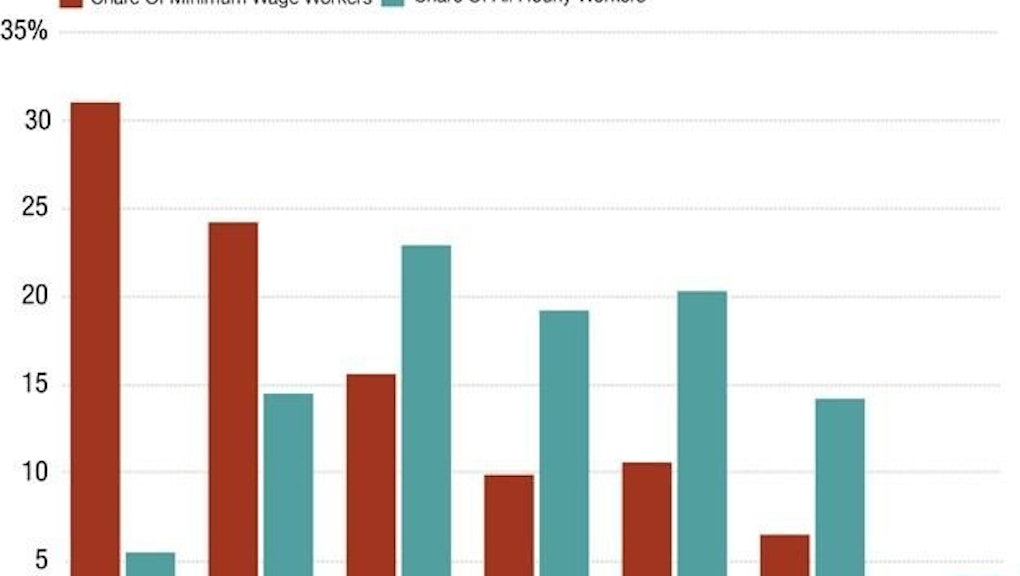 Courtesy of Quoctrong Bui at Planet Money, this amazing series of charts show who, exactly, is living on minimum wage across the United States. While many people have a different impression of the minimum-wage worker, Bui found that the average minimum wage employee was a female who works in hospitality and leisure with a rough age in her 20s or 30s.

With wage laws in the news lately with a Seattle-area town planning to raise minimum hourly wages to $15 and a Senate Democratic proposal to raise it as high as $10.10, it's important to have some context and see what, exactly, impact adjusting the minimum wage would have on the economy.

According to Brad Plumer at the Washington Post, the conventional wisdom that minimum wage increases are paid for by shedding workers (thus increasing unemployment) may be wrong. Instead, employers actually have a variety of tools at their disposal to absorb the economic impact. Not all of them are good for the economy — or other workers. But on balance, it seems like the overall impact is small. Here's the cost-saving tactics he identified:

1. Employers can cut back on benefits, hours, or training

2. They can cut wages for higher-paid workers

3. Companies can raise prices to compensate ...

5. Employers can become more efficient and squeeze more work out of the same employees

6. Workers might voluntarily work harder (okay, there's not much empirical evidence for this one)

7. Employers might actually save money, because there's less employee turnover

These options might explain why economists have struggled to find a direct correlation behind higher minimum wages and increased unemployment, as hiring fewer workers is only one of a variety of cost-saving practices employers could use in the wake of a minimum wage hike. Additionally, the number of people making the actual federal minimum wage is quite small. According to the Bureau Of Labor Statistics, in 2012, out of the 75.3 million hourly employees in the United States, just 1.6 million made the minimum wage (and 2.0 million made below, for various reasons including employer exemptions and working for tips). That's 4.7% of all hourly paid workers, a far cry from the first year data was collected in 1974, when 13.4% made the minimum.

But some states make less than others — workers in Oklahoma, Texas, and Idaho all had between 7-8% of their hourly employees making minimum wage or below.

Also consider that a minimum wage increase to $10.10 would affect many more workers than just those making the current minimum of $7.25 an hour, as it would encompass all those in between and force other wages upwards.

According to Think Progress, Americans' typical hourly wages went up just $1.23 in the 36 years from 1973-2009. And Pew Research's Drew DeSilver notes that "after a three-step increase in 2007-09, today’s minimum wage buys more than it did recently, but its real purchasing power is about where it was four decades ago — and below its late-1960s peak."