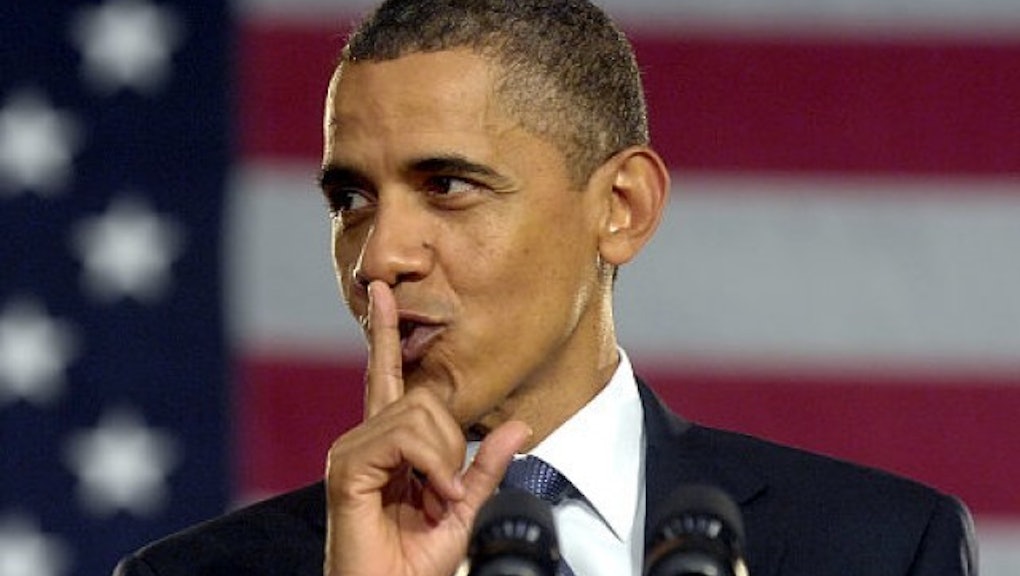 On Monday, President Barack Obama was heckled at a speech on immigration reform, which reminded me of other memorable incidents involving politicians and outspoken onlookers. While there doesn't seem to be a one-size-fits-all approach to handling these people, maybe Obama can take some comfort in the long, storied, and entertaining history of angry people yelling at American politicians.

While running for president in 2008, Hillary Clinton was confronted by a man repeatedly screaming, "Iron my shirt!" during a campaign speech. Instead of getting outwardly upset, Clinton took the diplomatic, and dare I say, "ladylike" approach and spun the narrative back to sexism in America.

While the Chris Christie "rage" model may not be viable outside of Jersey, there's definitely something to be said for trying to be angrier than your heckler.

Bill Clinton totally handled this heckler, who asked the former president about allegedly being associated with the Bohemian Club, a California retreat for wealthy businessmen and political figures. Clinton responded with his traditional backwoods charm, telling the heckler that while he's never been to the Bohemian Club, he thinks it's where "all those rich Republicans go and stand naked next to redwood trees."

I don't know about you, but the image of Newt Gingrich getting a hot stone massage while communing with Mother Nature definitely makes me forget about any implication of wrongdoing.

Sometimes you literally just have to duck when confronted by a heckler.

Michelle Obama doesn't like hecklers, as she lets you know here.

While the disciplinarian approach displayed in this video probably works with Malia, Sasha, Bo, Sunny, and Barack, it might be more difficult for the president to threaten to leave the State of the Union halfway through.

This video also makes me never want to get on Mobama's shit list.

Ronald Reagan won over this crowd by telling a heckler to "shut up."

Note: When doing something bold like this, you want to make sure the onlookers are firmly on your side and not on your heckler's — otherwise you risk the unintended and potentially painful consequences of a grudge match.

When confronted by Obamacare supporters at a "Defund Obamacare" rally, Sen. Ted Cruz implied (R-Texas) that the hecklers were paid operatives of the president.

Disclaimer: Only works in Texas and/or in crowds of conspiracy theorists.

While at a rally in Arizona, Sen. John McCain (R-Ariz.) responded to a heckler by eloquently summarizing his interpretation of the First Amendment, telling the crowd that in America, even "jerks are allowed" to speak. Leaving aside whatever is happening at the 10-second mark of this video, McCain's response makes me wonder how different the Bill of Rights would have sounded had he been born in 1736 instread of 1936.

With little chance of becoming mayor of New York City, serial sexter Anthony Weiner came off the rails while facing this particular heckler, telling him that he doesn't have the right to judge him for his mistakes.

Unfortunately, voters did just that and elected someone else.

While political heckling may not be the best way for constituents to constructively voice their opinions and oppositions, we're lucky to live in a country where you're not put in jail for yelling at a president, a senator, a governor, a first lady, or even a scumbag like Weiner.