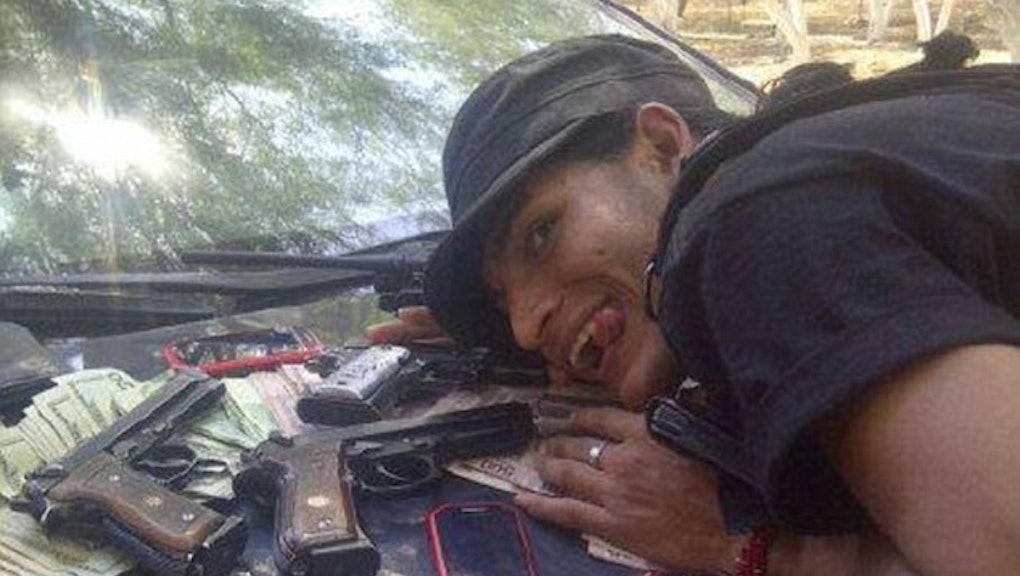 The Twitter Pictures Of These Mexican Drug Lord Children Are Insane

Ever wonder how the other half — the seedy half — lives? Well, thanks to the potent combination of Twitter and awful judgment, we can now look firsthand into the morbid world of Mexican drug cartels through the selfies and #NoFilter glamour shots of the sons of some of the world's most notorious mob bosses.

As the Daily Dot reports, gold-plated AK-47s, pet tigers, piles of drugs and money, and $200,000 cars casually dot the image uploads on Twitter from 23-year-old Serafin Zambada Ortiz, offspring of wanted Sinaloa cartel second-in-command, Ismael Zambada. It's clear from even a casual glance that this is a look at a life utterly divorced from the mundane concerns of everyday life, full of unparalleled luxury.

Here's his new Bentley with luxury interior and dashboard:

Zambada apparently thinks nothing of sharing a couple shots of what one can only presume is his personal stash:

Yes. That is a pet cheeta:

Yes, that is a machine gun.

Booze and money during a casual game of cards:

And this giant arsenal, comprising of shotguns, assault rifles, and sub-machine guns:

Zambada also has some interesting social media buddies, including Alfredo Guzmán, son of Sinaloa Cartel head honcho Joaquin "El Chapo" Guzmán Loera, who once posted a picture of a corpse with the caption " ... the victim tried to pass himself off as part of the Guzmán clan and paid the price." He, too, is fond of posting photos to Twitter. This one was posted with the comment "For those who step onto foreign soil, my active armed commando:"

Here's some more cartel photos found by Vice and the Daily Mail:

For what it's worth, this type of social media ostentatiousness isn't particularly uncommon among the young, privileged, and immoral. As outlandish as it may seem, the children of dictators have also taken to aggressively flaunting their wealth and power online. Here, for example, is a self-uploaded photo of Dino Bouterse, son of Surinamese strongman Desi Bouterse, holding a shotgun to a man's spine:

"... the notion of a former (current?) dictator's family flaunting their wealth via social media is a new wrinkle in the long story of autocracies. Imagine Mussolini with Twitter, or Mobutu with Instagram. The notion that Facebook can bring down a dictator runs pretty hard into reality when the dictator's kids are using it to show off their arsenal, and looking smug about it."

So too, it seems, is social media not a very good tool for keeping drug dealers or other large-scale criminal enterprises in check. In fact, it can actually function as a chilling tool to inspire fear and repression. Mexican drug cartels have been known to actively arrange their hits in spectacular poses seemingly engineered to garner attention in the media and inspire fear, such as a hit in Urupan, Michoacan, in early 2013, when seven men were found shot dead in a central plaza with messages attached to their bodies with ice picks. Photos of the brutal crime quickly went viral on Mexican social media. As PolicyMic's Zak Cheney-Rice writes:

"... emphasis is placed on highly visible and spectacular punishment. Gone are the shadowy Mafia hits we’re accustomed to from the movies: in the Mexican drug war,  you don’t just disappear. Your death is an example for everyone, presented in all its photo-ready glory.

Considering current fixations on image and viral web content, this is a viable strategy. Mass slaughter is now Facebook shareable: There exist few better ways of effectively sending a message than a striking image. And despite their horror, there’s something undeniably artistic in the way these mass killings are structured, so clearly executed with a distinct aesthetic in mind."