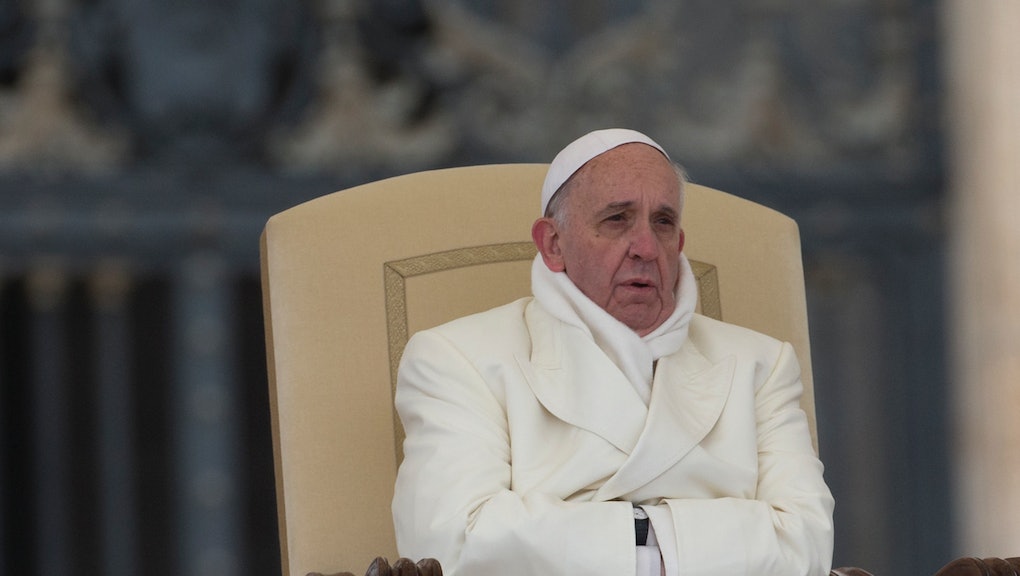 Pope Francis Denounces Capitalism, But is He Right?

As PolicyMic's Nina Ippolito noted, Pope Francis had harsh words for free market capitalism and the economic inequality it produces — going so far as to claim it is "the root of all social ills," "the cause of violence," and a "tyranny."

He went on to say, "Some people continue to defend trickle-down theories which assume that economic growth, encouraged by a free market, will inevitably succeed in bringing about greater justice and inclusiveness in the world. This opinion, which has never been confirmed by the facts, expresses a crude and naïve trust in the goodness of those wielding economic power and in the sacralized workings of the prevailing economic system. Meanwhile, the excluded are still waiting."

As is typical with many leftist critics of capitalism, the pope is looking at the end result and losing the forest for the trees. What he and many others don't realize is that not only is capitalism a better system of producing a higher standard of living and prosperity than any other economic model, it's also the most fair system that produces the most happiness for the most people. He is flat out wrong about his facts.

First, capitalism allows us to earn our success. Study after study shows that earned success leads to happiness far more so than being handed material wealth. Keep in mind that success is not only defined by money. Depending on what your interests are, success could translate into the satisfaction of running a charity, raising a family, or making a difference in a cause you support.

Second, capitalism is the most fair system. If we're talking about equal distribution of wealth, capitalism produces decidedly unequal results. Even communism — that alleged equalizer — failed miserably at providing equal outcomes. The Soviet Politburo, as despotic regimes typically do, was happy to preach equality while at the same time providing generous exceptions for themselves and their allies.

If we're speaking about keeping what you earn, capitalism delivers. If a person is asked whether someone has a right to what they did not earn, the answer is almost always a resounding no. Therefore, the free market leads to more fairness if less redistributive "equality." Redistribution is totalitarian and oppressive. You simply cannot build a group of people up by tearing another group down. Misery loves company, which leads to happiness for no one.

Third, capitalism leads to greater generosity. Four of the world's five most charitable nations (the United States, Ireland, Australia, New Zealand, and the United Kingdom) also rank among the 10 most economically free, according to a pair of studies. When free people and beneficiaries of free enterprise choose to support the causes they love, they are far more generous, whereas when the government purports to "take care of everyone," no one feels the need to give. Be that as it may, a prosperous society will donate to charity, not only for the benefit of the recipient, but for the rewards to the giver. Economically free countries tend to be wealthier, meaning citizens generally have more to give. More importantly, nations without free economies tend to see the state displace civil society as the source of any support.

"The welfare system," as Milton Friedman once explained, "has destroyed private charitable arrangements that are far more effective, far more compassionate, far more person-to-person in helping people who are really, for no fault of their own, in a disadvantaged situation." Freer economies, on the other hand, both leave citizens with more money to give to the charities of their choosing, and foster a sense of individual responsibility towards the less fortunate — as opposed to a sense that it is the state's responsibility to care for the poor and downtrodden.

Finally, capitalism leads to a higher standard of living for everyone. As former President John F. Kennedy once quipped, "A rising tide lifts all boats." One has only to consider the example of North and South Korea. Here, two very similar cultures went down two very different paths. Obviously, the path of the freedom of markets led to a better standard of living for all the citizens of South Korea, and the path of government enforced "equality" made everyone equally miserable in North Korea. Consider that even the very poorest Americans are wealthier than 60% of the world's population, according to a World Bank study. Another analysis of U.S. Census Bureau data proves that even the poorest Americans have seen their average real income rise by more than 10% between 1970 and 2010, proving that the poor do not keep getting poorer in America.

The bottom line is that not only do the numbers support capitalism, morality supports capitalism. Communism has been tried and repeatedly failed to deliver both happiness as well as protection of civil liberties. Capitalism also produces far more wealth per capita than does Socialism. As even the New York Times' and NPR's Adam Davidson illustrates, "GDP per capita in the U.S. is nearly 50% higher than it is in Europe. Even Europe's best-performing large country, Germany, is about 20% poorer than the U.S. on a per-person basis (and both countries have roughly 15% of their populations living below the poverty line). While Norway and Sweden are richer than the U.S., on average, they are more comparable to wealthy American microeconomies like Washington, D.C., or parts of Connecticut — both of which are actually considerably wealthier. A reporter in Greece once complained after I compared her country to Mississippi, America's poorest state. She's right: the comparison isn't fair. The average Mississippian is richer than the average Greek."