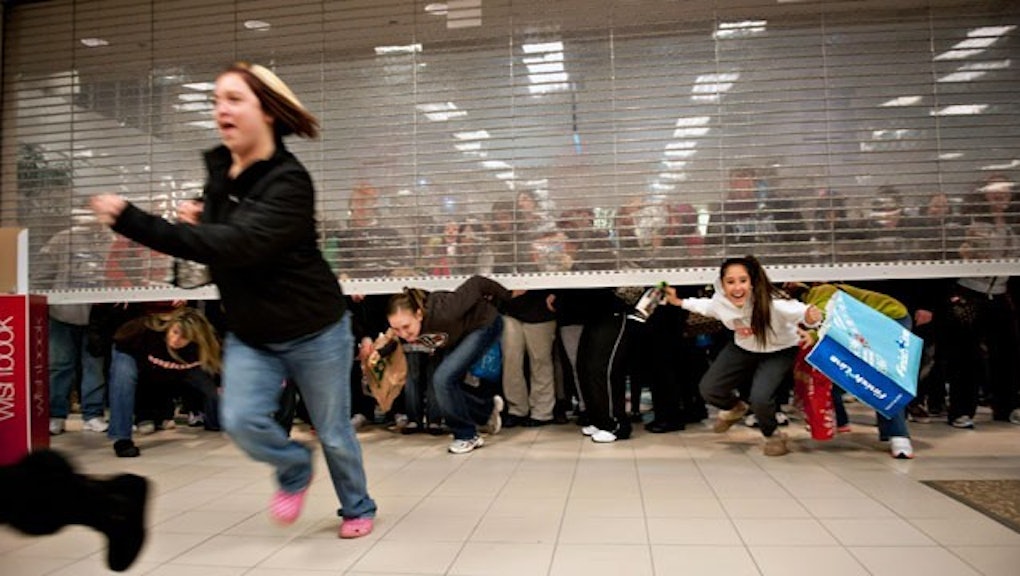 Black Friday Is Not A Good Deal, For Anyone

Thanksgiving is once again upon us, but instead of focusing on the holiday and the values it represents, we are already being encouraged to forget about it in favor of the day after Thanksgiving. Marking the start of the holiday shopping frenzy, Black Friday has swiftly become the true star of the Thanksgiving season, eschewing traditional values such as gratefulness and instead endorsing commercialism, irresponsibility and selfish consumerism.

The Friday after Thanksgiving has long been known as a day for holiday shopping, with better sales than can be found around Christmas. The day earned the "Black" moniker in the 1960s and is a reference to the profitability of the yearly fourth quarter shopping season. Aggressive marketing efforts by retailers have successfully reinforced the image of Black Friday as an unparalleled day for purchasing products at well below their usual price range.

A look at the numbers from recent years explains just how big Black Friday has become. In 2011, consumers spent $11.4 billion on Black Friday and $52.4 billion over the weekend following it, while over the same period in 2012, consumers spent $59.1 billion, or about $423 per person. A large part of the yearly increase in Black Friday spending is in fact due to the extension of sales events beyond Friday itself, at first to the following Monday, and now increasingly encroaching upon Thanksgiving Day itself.

Additionally, sales are increasingly being offered over the internet, and consumers are getting bombarded with more advertising aimed at convincing them to focus on getting deals on merchandise over honoring traditional holiday mores (which tend to reinforce positive values such as respect, sincerity, responsibility, and restraint). While retailers had appropriated Thanksgiving, Christmas, and other holidays falling in the time frame of the holiday shopping season for commercial purposes long ago, they are no longer playing coy about it, as this JC Penney spot aptly demonstrates:

Worse yet, those most eager to take advantage of the deals offered around Black Friday are in general less financially capable of affording big-ticket items at full price, but are unknowingly manipulated into doing so.  According to a 2012 Gallup poll on Black Friday shopping trends, those most interested in shopping for bargains are young nonwhite Americans between the ages of 18-29 earning less than $50k, while older Americans and higher earners are generally not interested in Friday’s bargain hunting. Furthermore, the younger demographic is more heavily targeted for the most highly anticipated deals offered on Thanksgiving Eve and Black Friday, but are not actually getting the bargains that they believe they are.

In fact, manufacturers and retailers have realized that they don’t actually have to offer products at discounted prices as long as they create the illusion of a discount. With the idea of bargain pricing ingrained in consumers' minds, retailers simply mark up the initial cost of an item and then sell it at a supposedly discounted rate which is essentially the actual price of the item before mark up. To create a further sense of urgency, retailers also ambiguously designate the most highly prized items as available in limited quantities, forcing customers into competition with one another.

An unfortunate result of the manufactured urgency of Black Friday events is an increase in violent confrontations and a loss of compassion for others. Over the last several years, numerous incidents of fights, shootings, stampedes, and generally inconsiderate behavior have broken out at sales events around the country, leading the Occupational Safety and Health Administration to issue safety guidelines aimed at controlling unruly crowds of consumers concerned only with scoring deals at the expense of others. Violence, robberies, and mobs have become such a normalized part of the post-Thanksgiving shopping culture that even television shows such as 'South Park' have taken to satirizing the situation. The cultivation of a consumer base that lacks sagacity must stop now, because as is, it only serves to erode the core values of our society, replacing the best with far worse alternatives.

It is well past time for us to rethink our approach to the Friday after Thanksgiving. Everybody deserves a break now and then, and a great deal on a wanted or needed product can and should absolutely provide that opportunity, but it shouldn’t come at the expense of our safety, sanity, or wellbeing.