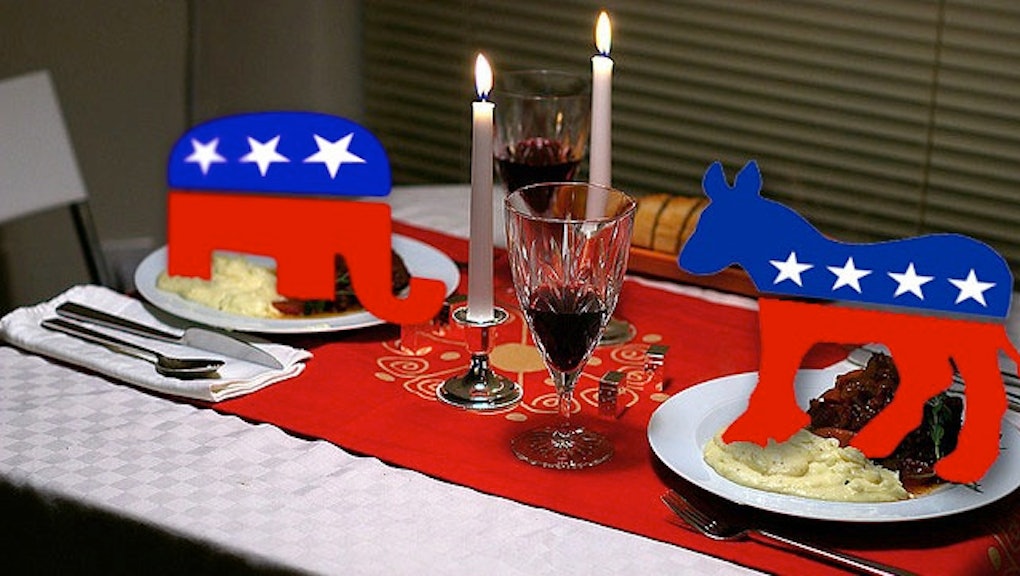 Thanksgiving Dinner Political Shouting Matches Are Actually Good For You

It isn’t until we’re walking up the driveway, side dishes across inner elbows and half-waving to the silhouette that’s waiting in the door frame, that my parents decide to tell me the news.

My cousin joined the Tea Party. Or joined inasmuch as it’s possible to “join” a nascent, disorganized political tantrum without member rolls of any kind; it suffices to say, since separating from her longtime, Hollywood-liberal partner, she’s gone ‘round the bend and come out the other side a true-red-white-and-blue paleoconservative.

The just-in-time warning is on purpose. Early enough to prevent an innocuous comment becoming a bloodbath; late enough to keep me from planning an argument, something I was known to do if sufficiently forewarned of an encounter with one of my crankier relatives. A holiday meal featuring me and my Zionist theocrat of an uncle hadn’t gone peacefully in years: for us, no pleasant conversation, no neutral topic no matter how carefully selected or rigidly enforced, was ever more than six degrees of separation from a particular stretch of Middle Eastern desert and the ongoing dispute between its tenants and their divine landlord. So help her God if my mother was going to allow the acrimony to spill over into her side of the family.

But the plan doesn’t work. Inside of an hour, before appetizers have even been unwrapped, my cousin (my cousin, not me. I don’t care what my mom says: I am not the perpetual troll at the feast) makes some off-hand remark about socialized medicine, and it’s on: another good-old-fashioned holiday rumble.

Perverse as it seems, these are the holiday meals I remember most fondly, and I don’t think I’m alone in that. In search of an appropriate topic for a holiday column, I asked a few friends and colleagues to talk about their relationship with Thanksgiving. Several recalled encounters with beloved nemeses, nostalgia palpable as they told stories of Turkey stuffed with screaming matches. “Growing up, Thanksgiving is when I got into my annual fight with my terrible, Republican aunt,” said one. A pause. “I miss her.”

“I have fond memories of yelling at my racist, warmongering, lib-baiting (and favorite) uncle,” said another. You need a column? “Make the case for having that loud argument with your conservative uncle at the dinner table. No one ever makes that case.”

And so we shall. This Thanksgiving, as you sit down with family both immediate and extended to commemorate the genocide of tens of millions of indigenous Americans by eating a large bird, don’t let the gravy be the only liquid boiling in your veins. Don’t let the cranberry sauce be the only red thing left torn to pieces on the table. No. This year, deliberately start a horrible screaming match about politics with your family.

I’m not talking about having a reasonable, well-educated “discussion” of “the issues”, with facts checked and measured tones. I’m talking about an emotional, incoherent blood bath. Something memorable enough to be recalled in future pleas to avoid “a repeat of last year”.

I’m not talking about Organizing for Action’s push for serious conversations between parents and their “young invincibles,” either. The Right’s resulting tantrum was predictable, and while I share their disdain for the President’s plan, they’ve got their casus belli backwards. They’re aghast — just aghast! — that OFA wants to turn pleasant Thanksgivings political. I’m aghast that the President expects these conversations to be serious. To hell with measured tones, those are for business days.

Tonight is not the night to hold back. It doesn’t call for inside voices. Today is not a day of restraint, because today is Thanksgiving: we eat gratuitously, we drink excessively, and god damn it, we will fight with equally grotesque impunity. We’re celebrating excess here.

There is a virtue in these fights. Holidays are times of rest and relaxation; they are the days we are meant to unload our troubles, rest, and refresh ourselves for colder weeks ahead. We all have seething, political vitriol in us — why not get that weight off your chest on a day designed for laying all our burdens down?

We know what happens when we don’t. When we suppress the bile and smile through dessert then go back to our daily lives still stuffed full of rage, the jeremiad inside us finds other, more precarious outlets: Screaming at your roommate’s pal from out of town over what was supposed to be a friendly round of beers. Getting into a relationship-ending fight with your girlfriend because wait, you mean you seriously voted for that guy? Losing that promotion because you couldn’t help letting your boss know how you felt about the Tea Party right before you found out where he keeps his Samuel Adams mask.

These can be dangerous, life-destroying sublimations. Better to get all the righteousness out where it’s safe.

The real substance of love between family members is the capacity to go on loving one another no matter what. We all know that we can treat our parents, our grandparents, our aunts, and uncles, and our cousins far worse than we could ever get away with treating any one not literally bound to us by blood. Families don’t love each other in spite of acrimony; they love in virtue of it. They are the support and freedom to be entirely who we are, even the ugly parts.

What safer place to offload all that pent up polemicizing than on a day of rest, with people who will always love you?

So go ahead. Tell your uncle that he’s a racist hick who doesn’t understand how macroeconomics works. Let him say that little fascists like you are why liberty-loving people keep guns. It’ll be cathartic for both of you, and you’ll wake up Friday saner, more relaxed, and with a memory you’ll both treasure on future days apart. Let it all out: no matter what you say, or they say, you’ll all be back next year.