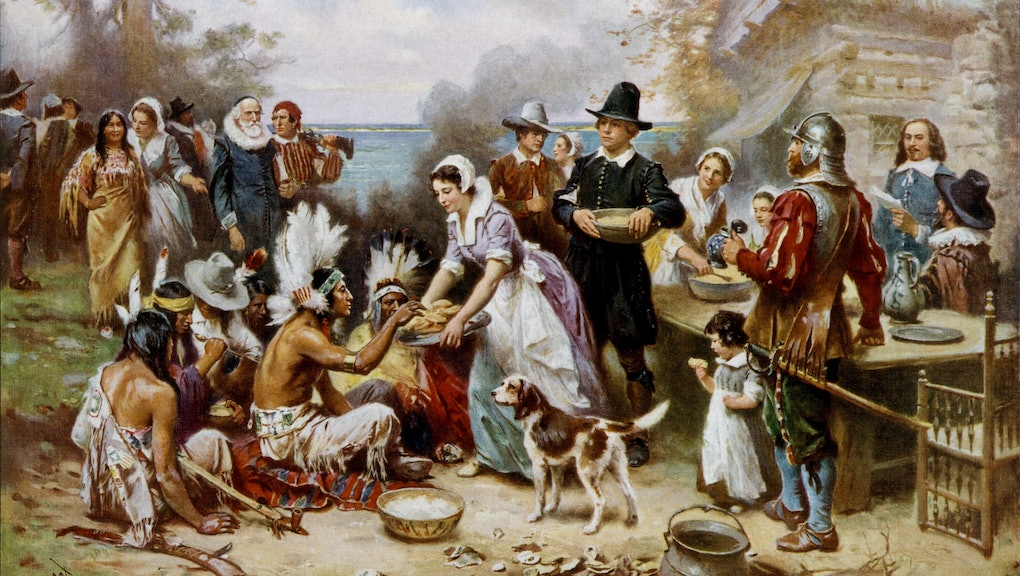 When I was a kid, Thanksgiving was the day family and friends from around the East Coast came to our home to find the seven chairs around our dinner table squished together to make room for another ten or twelve. We rejoiced in being together and suspending manners to better facilitate eating an obscene amount of food. In the elementary classes leading up to those precious few days off my teachers would recount the fairy tale of the “First Thanksgiving” while making us figure out how many pounds of stuffing America would gorge on this year. It’s far from an original story, in fact it’s Classic Americana. The iconic contemporary Thanksgiving is a part of our ever changing national identity.

That is if you identify as your typical American who recognizes the holiday as a part of our manifest destiny. Luckily, there are plenty of people on the fringes of society that call to question what it is we’re doing on the third Thursday of every November. “Setting people straight about Thanksgiving myths has become as a much a part of the annual holiday as turkey, cranberry sauce and pumpkin pie. But should historians bother?” mused Dr. Jeremy Bangs, former curator at the Plymouth Plantation. I think that answer is an easy yes.

The legend of the pilgrims of the Massachusetts Bay Colony is far from being verified. We do know that the colonists probably stole most of what they enjoyed that winter from Native American stocks they found. Giving thanks for a good harvest did come in time for the pilgrims, but they never called it Thanksgiving and they brought natives along because they’re the ones that kept these naive foreigners alive. Obviously theft was only the beginning of the travesties against the Native population that our modern myth perpetually ignores. It even helps us forget the Natives still relegated to reservations.

Beyond the great myth, there’s more that’s  unsettling about our Thanksgiving. When we put aside our busy day to sit at a table with relatives we can barely endure you have to wonder at the point of it all. For so many of us now, America’s most important family dinner is just another stop for refueling on “Black Friday Eve.” A huge feast to prepare ourselves to buy presents for the same people we just left at the dinner table. When Lincoln nationalized the then Northern holiday, I’m certain he wasn’t debating how he would tackle this year’s Christmas list for all the southern politicians he would soon have to commune with again. Granted, Lincoln never had to deal with Facebook posts from Uncle Jefferson.

What’s really cool about Lincoln’s decisions is the people that motivated him. You’ve probably never heard of her, but Sarah Josepha Hale (the lady who wrote “Mary Had A Little Lamb”) convinced him to declare a day of national thanksgiving. Until then, states celebrated on their own when and if they wanted to. She demanded from several presidents a “Great American Festival of Thanksgiving.” It was Lincoln that agreed, calling for Americans all over the world to join him in giving thanks for what they had and to pray for a better tomorrow.

We’re still the young powerhouse of the world and we will be for a while. As we continue to form our national identity we must proceed with caution. Forgetting the past for the sake of modern consumerism is a crime we’re all committing. At times it seems hard for us to relate to our forefathers many of whom didn’t look or act like many of us. But maybe It’s not about the first Thanksgiving, it’s about the day Hale and Lincoln imagined. Today, as a nation let’s just try to give thanks for what we have while reflecting on how we got here. Over dinner, maybe we can chat with our families and get ready to make the better tomorrow that Lincoln worked so hard for.