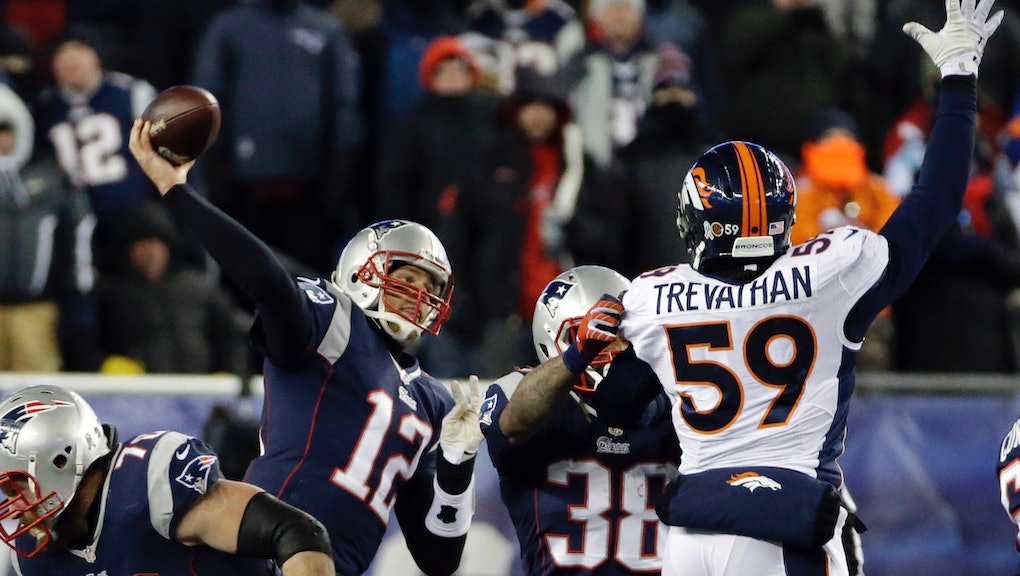 This Thursday, sports fans across the country, stuffed full of turkey and tryptophan, will hunker down to watch some football, an all-American tradition which began in 1934 with the Detroit Lions. Our popular stereotype is that on Thanksgiving, women cook and men yell at their televisions, but what if you're a guy who doesn't like sports?

Last month at a party, I was introduced to another millennial guy, who we’re going to call Todd, because I forgot his real name. In an attempt to find common ground with Todd, I reached for what I consider the lowest-hanging fruit in guy talk: sports.

I started with baseball, which was then in the post season. When he said he wasn’t into baseball, I tried a few others before realizing that he simply did not like sports. Awkward silence ensued. I quite honestly had trouble rehabilitating the conversation. It was as if he had put a 2 into the binary sequence of my brain. (00011001010 … 2? … explosion)

How could he not be into sports? Wasn't he a man?

I knew that Todd's interest, or lack of interest, in sports obviously didn't define his masculinity, but I couldn’t help but think he was weird. It’s tempting to say it was a simple matter of him not understanding a fundamental part of my life, but then if he were a woman, I would have forgiven that lack of understanding.

Why are sports considered inherently masculine, and how do we men who do like sports bridge the divide between us and men who don’t like them?

I love playing sports for the competition, the camaraderie, and the fitness. I love watching sports for similar reasons. I love watching sports particularly for the bond it creates between myself, other fans, and a certain city or region. And while a great many women love sports, I generally automatically (and quite unfairly) hold women to a different standard than men when it comes to understanding and enjoyment of sports.

Evolutionary theory supports my unequal standards. A 2012 study from PLOS ONE found that men have a "greater motivational predisposition to be interested in sports," as evidenced by collegiate, recreational, and intramural participation. The most significant finding, they claim, is the 26% female participation level in intramural sports, where the only barrier to entry is thedesire to play. (For collegiate sports, there are other factors at play that may dissuade men and women alike from participating, like finances and status). They cite an evolutionary history of physical competition between men that simply wasn’t as present for women.

We don’t need biology, however, to prove that sports influence us emotionally. In its most benign form, imagine someone watching the game from their couch and clicking their tongue in disappointment when their team loses. More extreme examples include the hooligans who flip cars, set things on fire, or even kill one another when their team loses (or wins, for that matter). You could certainly argue that such incidents are simply evidence of mob mentality gone awry, but the mobs’ actions were still started by a collective emotional reaction to a sporting event.

Take, for instance, these Kentucky fans who flipped a car after winning a game.

Although a pro sports team doesn’t literally affect your life, no fan can say that it doesn't affect them. When the opposing quarterback throws a game-winning pass against your team, he doesn’t also come to your house and punch you in the stomach, but it feels like it.

That might be part of what makes me uncomfortable when a guy like my buddy Todd doesn’t like sports. Someone who didn’t sympathize with seeing you get punched in the stomach would be considered a little sociopathic (unless they were the one punching you). Not that I feel a man who doesn’t like sports is incapable of empathy, but if he doesn’t remotely understand what I felt when Eli Manning completed a 32 yard pass to David Tyree which led to ending the Patriots’ perfect season, he doesn’t understand one of the most depressing moments of my life.

All of that said, letting the conversation fizzle because I was quietly judging Todd was lazy and narrow-minded of me, and holding women to a different standard for sports fandom is inherently anti-feminist.

If I want to know how Todd defines his masculinity, the matter is honestly as simple as asking him. Maybe he is competitive, but channels it into different outlets, such as video games, or his career. Maybe he isn’t competitive at all, in which case, what are his outlets, his escapes? To discount him as less than three-dimensional because he doesn’t like sports, if you really think about it, is not only judgmental, but kind of ridiculous. That said, for him to judge me for being passionate about something so globally popular would also be unreasonable.

Just because something is ubiquitously popular among men doesn't mean men that don’t like it are less masculine. And after I finish watching the game today, the next time I see Todd, I will remember that and engage him correctly. If I can remember his real name.