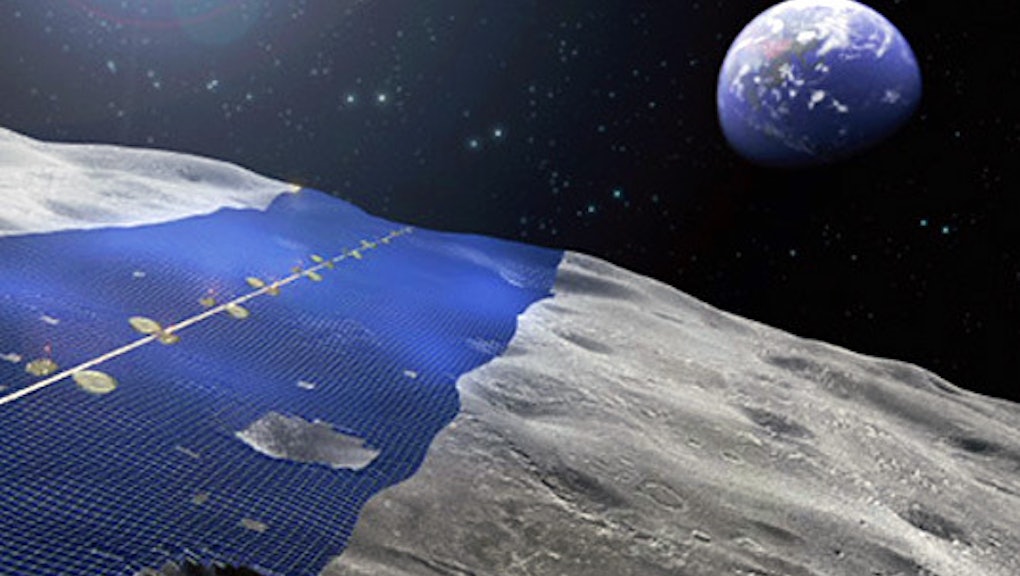 The news: Japan's Shimuzu Corporation has an insane plan to turn the moon into a gigantic solar power plant. The catastrophe at the Fukushima nuclear power plant has made the Japanese think much more seriously about alternative energy, and Shimuzu is an early leader in developing what some might consider far-fetched plans to "supply energy to the entire world."

Here's what they want to do: Build a 12-mile-wide, 6,800-mile-long "Luna Ring" of solar panels on the lunar surface. The gigantic power plant would then beam the collected energy back to planet Earth via microwave beams and lasers.

In a statement to the media, Shimuzu announced:

"A shift from economical use of limited resources to the unlimited use of clean energy is the ultimate dream of all mankind. The Luna Ring, our lunar solar power generation concept, translates this dream into reality through ingenious ideas coupled with advanced space technologies.

Virtually inexhaustible, non-polluting solar energy is the ultimate source of green energy that brings prosperity to nature as well as our lives. Shimizu Corporation proposes the Luna Ring for the infinite coexistence of mankind and the Earth."

The company provided a convenient series of infographics detailing the scheme, seen below:

Seriously? Well, probably not. The last manned flight to the moon was in December 1972. Shimuzu says they'll build the entire thing with robots, but the technology required to even contemplate an unmanned construction project on that scale is probably decades, if not centuries, away.

Then there's the issue of setting up a global power reception system, utilizing technology that hasn't really been invented yet. Fans of Simcity will recognize the scenario that ensues when a microwave beam misfires:

Space-based solar panels would degrade at about eight times the rate they do on Earth, and be vulnerable to catastrophic failure via bombardment from space debris, which hits the moon at a disproportionate rate. There's currently 400,000 lbs of man-made space debris on the lunar surface, and more is hitting the ground every day.

Shimuzu claims their facility could generate 13,000 terawatts of energy continuously if the project was operating according to parameters. It took the United States an entire year in 2011 to generate 4,100 terawatts of power.

So while it sounds like a good idea, Shimuzu's plan is more-or-less a pipe dream at current. That said, it's the kind of big thinking about alternative energy we need these days. The United States alone is currently using over 119 million barrels of oil a day, and it won't last forever.