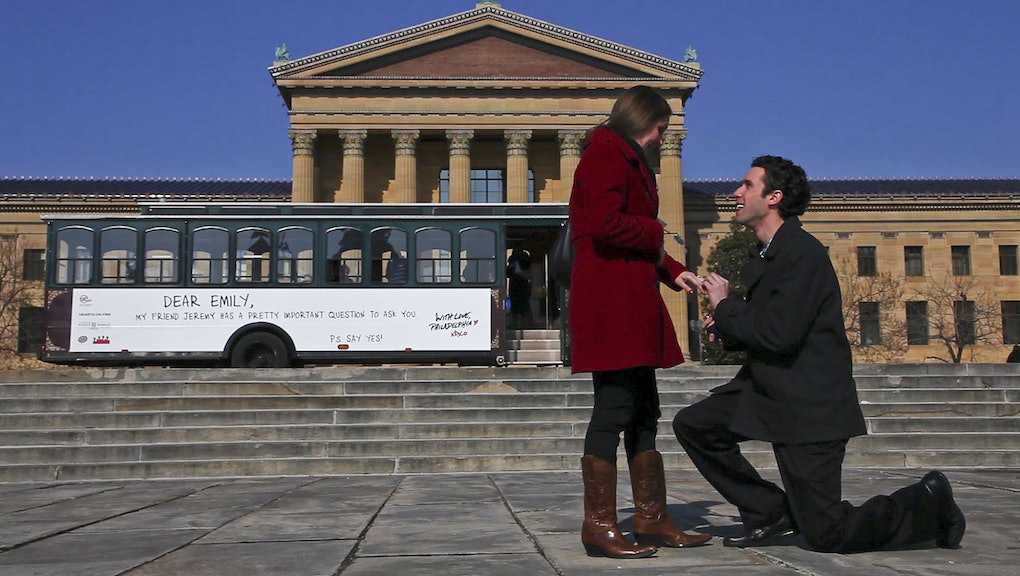 I Don't Want My Marriage To Go Viral

When I was 14, I was going to marry Lance Bass of *NSYNC fame (yes, yes, I know) because he was good-looking and rich and famous.

If I couldn’t marry him, then perhaps the artistic, dark-haired, blue-eyed boy at school would do, but I was pretty sure that I would be the future Mrs. Bass. Whenever I announced my plans, though, the adults around me would react in the same way. They told me when I married someone, it would be for the way he treated me, not because he was rich or famous.

There was no harm in in my grandiose dreams. All teenagers have them. So I had to wonder: Were these denunciations of my flights-of-fancy just well-intended wisdom, or a subtle reminder to know my place?

The same question popped into my mind when I read a recent glorification of the plain and simple life by Ann Voskamp, titled "The Real Truth About 'Boring' Men — and the Women Who Live With Them." She writes in the legacy of what I call the "Good Enough" genre for young men and women. Don’t waste time looking for "The One," these articles proclaim, just pick the one you have now and marry him or her already!

Voskamp begins her piece by telling her boys that their father didn’t get down on one knee, but she didn't care, because real romance is a man who imagines washing up your puke, scraping the crud out of your dishwasher, buying you menstrual pads, admiring your boobs even when they're leaking milk, and still hugging you tight even when you are old and wrinkly.

Your dad will say it sometimes to me, a leaning over — "I am glad that there's always only been you." Not some bare, plastic-surgeon-scalpel-enhanced pixels ballooning on a screen, not some tempting flesh clicked on in the dark, not some photo-shopped figment of cultural beauty that's basically a lie.

The issue that Voskamp is centrally concerned with is viral wedding proposals. She seems to think that all the young people today expect them.

She's not wrong to note the popularity of over-the-top engagement tactics. Take this video, where Lisa is proposed to via a message on a skyscraper.

Or here, where Jeff painted (or rather had other people paint) a mural using Scrabble as an inspiration.

Voskamp is not alone in worrying that viral videos like these are giving young people like me a false impression of what true love is. Recently, I've noticed an increased amount of concern that these kinds of proposals are raising the bar too high.

Much ado about nothing, in my opinion. Of course, it's easy to write Upworthy-style articles proclaiming "You won't believe the five things that happened when this guy proposed," but it's just as easy to write an article like Voskamp's, saying "Forget the viral video, because REAL love is _______."

I just want people to lay off already and trust that "young people today" will figure it out.

Recently, I had coffee with a friend whose girlfriend had just delivered their second child. We grabbed our paper cups and placed them on the stainless steel counter, crossing arms as I reached for the sweetener and he reached for the cream. He asked me when I was going to get married. Nonchalantly, I shook my Sweet-n-Low packet to let the contents settle to the bottom. As I tore it open, I asked him the same question.

Neither of us knew when, or even if, we would ever get married. Truthfully, neither of us were even sure if getting married was something we wanted to do, or something that was just expected of us. We both shrugged, buttoned our coats, and went back out in the cold.

Marriage may not be the glamorous affair I dreamt of as a teenager. A story like Voskamp's may be pragmatic, but it is hardly the kind of relationship  that any young person aspires to. Maybe marriage rates are dropping because women like her write articles defining marriage by all of the fluids you have to deal with. Heck, if my friend is any indicator, you don’t have to be married to be in a serious relationship. Most millennials think parenthood is more of a milestone than marriage, according to research by Pew. For most of us, viral proposal videos don't even enter the marriage conversation, if we're even having those conversations in the first place.

As when I was a teenager, it's easy to write off adults like Voskamp, who seem so out of touch as to be totally irrelevant. But even if she's wrong about the ubiquity of viral proposals, she's right to point out that the times have changed, and that the old rules may no longer apply. Beyond that, as we wade into these murky waters of "emerging adulthood," we’re all better served if we stop listening to the pressures around us and define our relationships on our own terms.