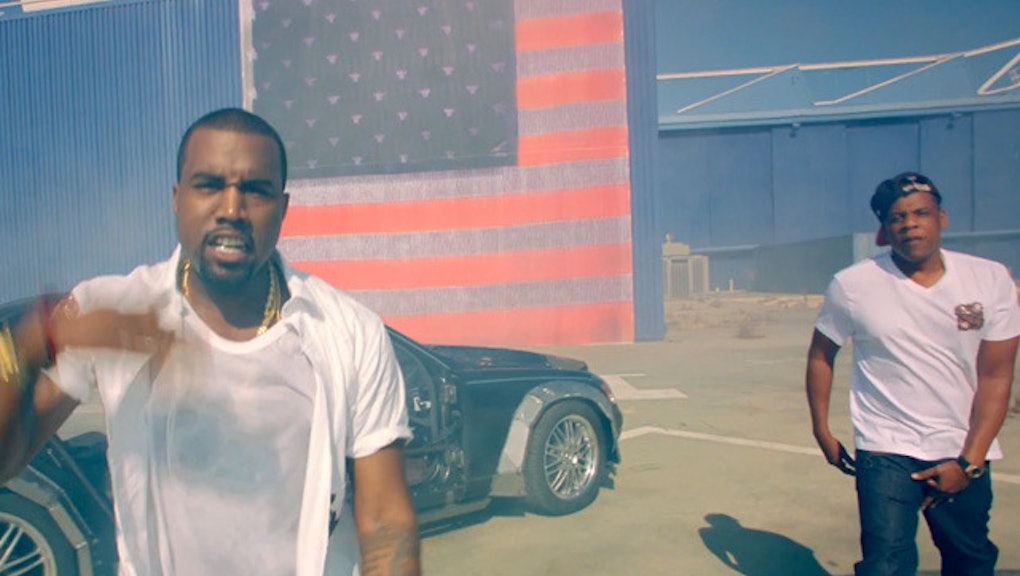 The news: Kanye West said something kind of stupid, again.

In a radio interview with 105.1 FM in New York City earlier this week, Kanye said that President Obama is having trouble executing his agenda in part because "black people don't have the same level of connections as Jewish people."

Hear the clip below:

KANYE WEST: We don’t got it like that. When I tell you only seven black billionaires, look at marginalization, and we feel like we happy because me and Rick Ross got it made, or I got a spread outside, a couple of us, or they put a black president.

Does he have a point? Well, yes. Despite all the hate being thrown his way over his over-the-top ego, terrible internal filter, and late-stage career stagnation, Kanye is clearly not an idiot. He's absolutely 100% correct that a majority of black America lacks the same kind of connections and access to power and resources that certain other ethnic groups in the country do. But his analysis really doesn't make much sense after that point, at least in the Obama-centric context Yeezy's talking about.

As Newsbusters pointed out, it turns out being the leader of the free world, the commander-in-chief of the largest, most powerful military ever conceived, and possibly one of the biggest celebrities of his entire generation comes with a distinct abundance of connections. When it came to fundraising, black president Barack Obama actually had a serious edge over the hilariously white and paternalistic Mitt Romney, coming in at a total of $1.123 billion to Romney's $1.019.

As for oil money, yes, it's true that Romney trounced the president in oil-industry fundraising throughout the entire 2012 election cycle. But that didn't stop Obama from pocketing $772,000 in energy sector donations through mid-April last year and accepting $250,000 in inauguration celebration funding from an Exxon Mobil foundation. That's not quite pennies.

And a great deal of Obama's popularity comes from being a black man whose personality and demeanor appeals to white sensibilities.

That's not even really considering the overall implications of Kanye's remarks, which are pretty anti-Semitic and play into stereotypes about Jewish people. Come on.

I'll throw West a bone: Obama would almost undoubtedly have a significantly easier time implementing his agenda if he was white or Jewish. But he's the president, and the ball's in his hands now. Obama's inability to implement his agenda has less to do with "connections" and more to do with a terrifying combination of economic uncertainty, entrenched lobbies, unending Republican opposition to his policies, and a great deal of racial resentment and white aggrievement (which West, to his credit, clearly knows). He has plenty of connections - he just can't capitalize on them. West is clearly not a political scientist.

Why should I care what 'Ye has to say about politics, anyhow? You absolutely shouldn't. Like, at all.

Anyhow, this was just one of many hilarious moments where Kanye kind of just flailed around during his interview with 105.1's Charlamagne. Listen to Yeesy get ripped a new one below. Hint: Charlamagne did not like Yeezus.